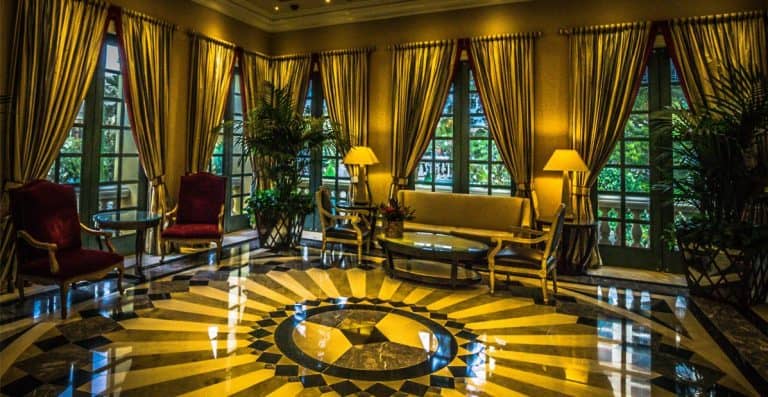 There’s something genuinely thrilling about spending time in an opulent casino in an exotic location.

You may not be a poker ace or have a knack for craps, but there’s something for everyone to enjoy in these lavish pleasure palaces.

A Note on Most Beautiful Casinos

Several casinos mentioned on this list also serve as hotels, spa resorts, and places of historical interest, so it’s possible to visit them and soak up the atmosphere without having to set foot near a roulette table.

If you are planning to enjoy the gaming halls and poker rooms, you will need to familiarise yourself with the particular etiquette of each casino.

And don’t forget to spruce up and get your glad rags on if you’ll be visiting during the evening.

Dress codes can sometimes be relaxed during the day, but there’s no excuse not to look the part at night.

Except for paying attention to the etiquette and house rules of a casino, it’s a good idea to brush up on things like the differences between European blackjack strategy and American, as well as distinct variations of Poker and Baccarat – especially if a trip to a Macau casino is on your list.

Anyway, without further ado and in no particular order, here are five of the most beautiful casinos in the world.

Reported to have cost an eye-watering $8 billion to construct, the Marina Bay Sands casino resort in Singapore is not just one of the most beautiful casinos in the world; it’s also the most expensive.

Its three-tower card deck design has been a fixture on the Singapore skyline since 2010, but the extravagance continues inside.

The Marina Bay Sands isn’t just a luxury casino and hotel resort, albeit one that contains 500 gaming tables, over 2000 slot machines, and a total of 2500 rooms and suites; it’s a 161,000 square foot entertainment and leisure complex.

Within the grounds of the resort, you’ll find a theatre, a shopping mall, and even a museum to while away the hours.

The world-famous SkyPark can be found on the 57th floor of the building, spanning 3 acres.

It includes restaurants, a nightclub, gardens, and even a vast infinity pool offering an unmatchable city panorama.

Situated on the edge of Germany’s Black Forest region, the Kurhaus of Baden-Baden is a culturally significant place, which today also houses a spa resort and conference complex.

Dating back to 1824, this neoclassical casino (designed by Friedrich Weinbrenner) had survived two World Wars. It became the epicenter of casino gaming when it was outlawed in France in the 1830s and inspired Fyodor Dostoyevsky’s The Gambler.

The casino itself may be small, but the opulent rooms decked out in lavish red furniture and golden chandeliers more than justify its place on this list.

Spend just one minute in here, and you’ll understand why screen legend Marlene Dietrich once called this place “the most beautiful casino in the world.”

This lavish resort is a vacation destination in its own right, but despite its jungle vibe, it’s only a 2-hour drive away from Johannesburg.

With a total of four hotels, two 18-hole golf courses, a fully equipped casino with every game imaginable, and even its Caribbean-style artificial beach, Sun City is one of those casino resorts that speaks to those with a sense of adventure.

Plus, guests of the resort can also book their exclusive safaris in the region’s best wildlife reserves.

The Venetian Macao holds the title of being the biggest casino in the world and the largest single structure building in Asia. Spanning a total of 10,500,000 square feet, the resort is also home to a luxury hotel with 3000 rooms and suites.

Besides the seemingly endless baccarat games in the casino, there are all sorts of entertainment and leisure programs on offer here.

The resort houses a 15,000 capacity sports venue, the Cotai Arena. You can even take a trip on an authentic (or so they say) Venetian gondola on the artificial canals running through the resort.

The splendid belle époque Casino de Monte-Carlo in Monaco is one of the oldest and grandest casinos in the world and the favorite casino of a particular fictional secret service agent (James Bond).

Construction of the casino, which was the brainchild of Princess Caroline, the Princess consort of Monaco, began in the late 1850s.

However, the transformation and redesign led by Charles Garnier (the architect of the Palais Garnier in Paris) in 1878 brought the casino to the world’s attention.

The casino, quite literally, changed the fortunes of the economy in Monaco, providing the ruling House of Grimaldi with its primary source of income during the centuries.

Over the years, it’s made numerous appearances in movies and TV shows and even hosted the first-ever Women’s Olympiad in 1921.