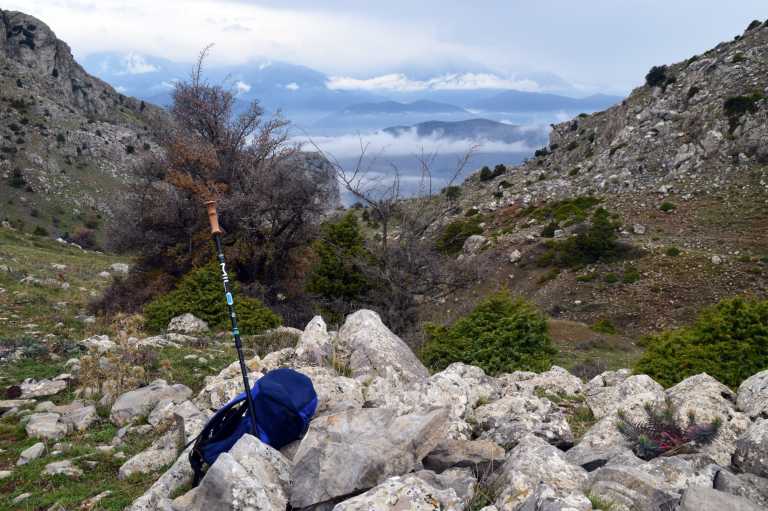 If you have ever been mountain hiking on any Greek mountains, you have experienced that exceptional beauty of the change of scenery and the open, unobstructed gazing at the horizon. It’s a fantastic feeling that gives birth to awe, peace, respect, and a feeling of achievement.

All these and more are present and enhanced when stepping at the top of the mountain and sticking a big smile at your phase.

The meeting point for mountain hiking

We met at Nestani.

This is a small village around 80 minutes from Athens (by car). There is nothing significant to see in the village apart from some monasteries (for the religious lovers) beautifully placed outside the village. Our goal was to climb at the top of mountain Ktenias.

The route seemed quite nice, and the different views from different altitudes were auspicious. There was a delay at starting, as the bus with almost all the climbers took a wrong turn missing the proper exit at the highway, and spent around 1.5 hours to turn back.

This would be an omen –as some say- but it was ignored. We arrived there in our car, as we would move to another location after the hiking, and we were not part of the official group.

Well, as you can see from the pictures, the route is very nice. What was relatively concerning was the fog we encountered almost at the very beginning.

We had some light rain pouring on us but nothing serious enough, though it made the ground slippery.

Yet, we also enjoyed this since the combination of fog, slight rain, nice scenery, extreme nature silence, and a group of happy people is relaxing and quite an atmosphere.

An essential piece of information for the story is that the group leader seemed to”be “over-motivated and inspired” to reach the top in any way… This caused quite some splits to the team consistency since people could follow at a slower pace.

Before reaching the top and due to the heavy fog, the group split, with a team –along with the group leader- heading to the top and another one went up to some point and turned back due to heavy weather conditions—however, it didn’t seem quite right, since all wanted to reach the top. We encountered the same problem since we were also taking photos for the article.

That 2nd team (which we were part of) followed a less explored and challenging return path, which eventually landed them at the same return spot.

It was pretty stressful (for knees and back) due to the extremely unfriendly terrain. Still, it was pretty adventurous at the same time since we used the terrain morphology and landscapes –along with heavy fog- to navigate our way back.

The Feelings after Hiking Ktenias

Once more Greece provided an inspiring alternative for hiking. We never heard of Ktenias Mountain before, and it was quite an intriguing surprise.

The lesson we also got was to double-check the group lead”rs “reputation” and make sure that they keep the group together by having their mind on the group consistency and safety.

We suggest this route only for the experienced ones since the marking of the route is only for about half the route. For the other half you need to have a GPS device with the route downloaded.