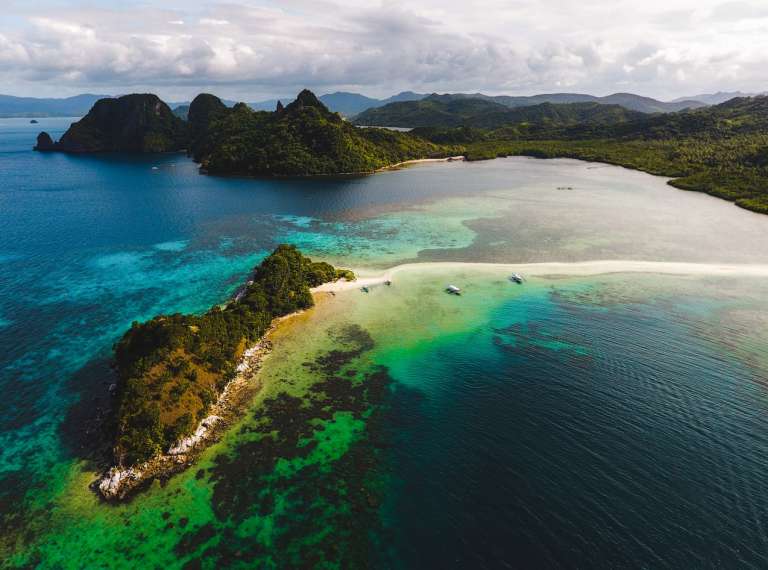 One tourist who fell in love with Palawan hailed it as the “single most beautiful place on Earth” and it is no wonder why Palawan has that effect on anyone.

This southern island of mainland Luzon has the largest number of tourist spots all crammed up in one province.

From its sugary-white sandy beaches, otherworldly rock formations, diverse flora and fauna both on land and in water, dozens of world-class diving sites and very hospitable locals, Palawan will make you fall in love with it at first sight.

As the provincial capital, Puerto Princesa is the center of everything in Palawan. It is the main gateway to the island and is home to the famous underground river and cave system which is among the New 7 Wonders of Nature.

Puerto Princesa is not as interesting as the other spots though, which is not surprising as cities are typically less favored in terms of nature trips.

If you are lucky, you can do island hopping in Honda Bay and get to watch dolphins and whales in their natural habitat.

The less popular twin of El Nido but equally beautiful, Coron looks very much like El Nido in terms of the spectacular rock formations and karst cliffs protruding from the turquoise waters but there’s so much more to Coron than that.

Instead, it is visited for its wreck-dive sites that are among the best in the world. Coron’s undersea escape is awe-inspiring.

Generally, Coron is much wilder and more laid-back than El NIdo. Local lifestyle is much simpler and so one will not easily find simple pleasures like ATMs in this part of Palawan.

If you are looking for a night life, Coron will leave you disappointed.

The most sought-after in all of Palawan, El Nido is the place to be if you want to splurge and experience the ultimate tropical getaway.

If you love the beach, El Nido will be your beach paradise. There is no shortage of white sandy shores on the island and if you do island hopping tours, which you must, you will find numerous other islands and hidden beaches that are simply amazing.

How to get there

Going to Palawan by air is the easiest and fastest way of getting into the island. Puerto Princesa has the international airport where most tourists arrive to.

There are ferries that go to Palawan from other coastal provinces in Luzon like Mindoro. There are regular fast ferries from San Jose Mindoro to Coron, Palawan and travel time is 3-4 hours. But if you will be coming from Manila then travel time will be at least 18 hours.

Where to stay in Palawan

Palawan offers different kinds of accommodation for every budget. Whether you are a backpacker or a celebrity, the island has something for you.

El Nido has more expensive places to stay than Coron and Puerto Princesa but it is also not difficult to find a hostel or a small guest house if you need one.

If you want to stay in an exclusive resort to celebrate a special occasion, your best chance to find a Maldivian kind of resort is in El Nido.

These hotels offer all inclusive packages to Palawan which lets you see the whole island and also includes transfers from Manila. Puerto Princesa, on the other hand, is packed with a lot of boutique hotels and resorts that is ideal if you want a comfortable place to stay for a short time.

What to do in Palawan

There are many things to do and see in Palawan. The island has everything for nature lovers, adventure seekers and beach bummers.

Other things to do are:

So, ready for Palawan? Looks like a really interesting place, isn’t it? Find more about Asia travel from our dedicated section.