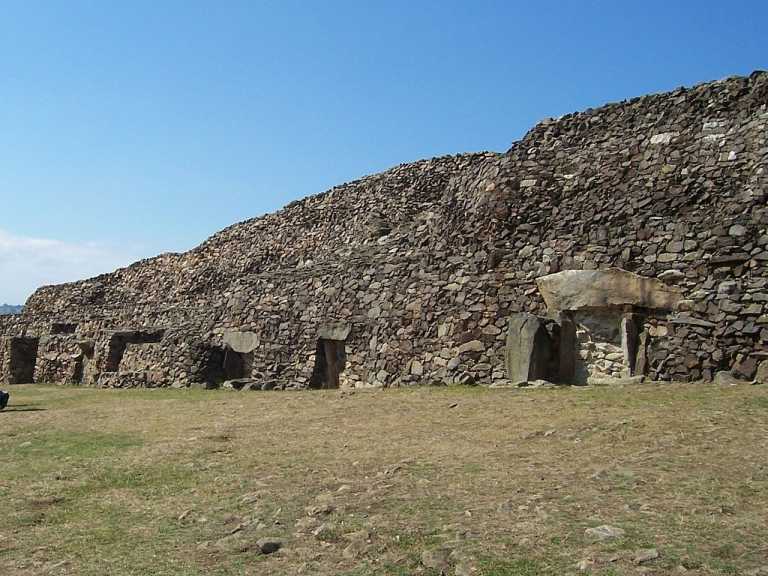 There’s no shortage of art and history to explore in the world. However, some of the things that show how old civilization is on earth are old buildings and the culture around them. Please read about the oldest buildings in the world and their story. The Tumulus of Bougon is one of them, along with Barnenez, and both are in France, but they are not the only ones. Maybe, not even the Egyptian pyramids you know are as famous.

The last age of the Stone Age was an exciting development for humankind. The change to a Neolithic culture was gradual and is the foundation of many modern cultural practices. Life was semi-nomadic, with beginning traces of society setting up camps.

Human remains from this time were often found embedded with arrowheads, and stone production improved. This all led to some exciting times for humankind. Thanks to centuries of discovery and restoration, we can have a little taste of and experience the lives, and more notably, deaths, of our prehistoric ancestors.

Visiting some of the world’s oldest buildings is a must if you’re a traveler with a taste for history. Being mindful and aware of the world’s history and man’s achievements teaches a lot about our capabilities.

The 6 Oldest Buildings in The World

We have to admire those who constructed the world’s oldest buildings, both for their knowledge and their will to move weighty materials from one location to the construction one. That very transfer of colossal stones remains a puzzle for some of these.

The name “Knap of Howar” has its origins in old Norse and means “mound of mounds” or “large barrow.” This Neolithic farmstead is in Scotland (Papa Westray) and is claimed to be one of the oldest stone structures in North-Western Europe.

There are two buildings in a rectangular oblong shape, built somewhere between 3700 and 3500 B.C. and situated next to the sea. Each building served a different purpose. One was the living space, while the other was the storage and workspace.

Some of its elements are well preserved (almost without any damage), like the beds made of stone and the shelves. The rooms in both buildings are pretty spacious. The holes in the structure supported the turf-made roof, which was raised above the walls.

The Megalithic temples of Malta are the oldest free-standing structures on Earth. They are different temples built all over Malta in other locations. These temples have unique features, but they share common characteristics, made from the same coralline limestone. For decoration and interiors, they used globigerina limestone while they carved things from nature, like plants, animals, and trees.

If you observe the megalithic temples of Malta, they resemble the ones in Stonehenge; however, in the Maltese ones, the are many interior chambers (referred to as “apses”).

All temples are now managed by the Heritage of Malta and are protected by UNESCO.

The Egyptian Pyramid of Djoser (or Steps Pyramid) is dated between 2667 and 2648 BC and is considered Egypt’s first pyramid (3rd dynasty of the Old Kingdom). Djoser was the second king of the 3rd dynasty (c. 2650–c. 2575 BCE). The archaeological site is located northwest of the city of Memphis. It is surrounded by Tura limestone.

The 6-tier and 4-sided structure is the earliest megalithic stone building in Egypt.

The passageway is roofed and imitates tree trunks where it leads to an area with another 20 pairs of columns that look like plant stems. Nobody was ever found in the tomb, which means it was robbed at some point in history.

Newgrange is older than Stonehenge and the Egyptian pyramids. The monument is situated in County Meath, Ireland. There are several tombs, and lots of human bones were found.

The inner passage is made of 547 slabs from greywacke, and the granite used for the interiors is from the Mourne mountains.

Hidden in the picturesque town of Plouezoc’h is one of the oldest manufactured structures in the world. Located on a hill with a fabulous view overlooking the Bay of Morlaix is the Cairn of Barnenez. The mound dates back to about 4800 BC, when the first phase was constructed. This was during the Neolithic period with the first emergence of stone, livestock farming, and agriculture.

The use of flat stones, either as traditional dolmens or in a particular arrangement, gives the structure its rounded mound-like appearance.

The two cairns that comprise the monument weigh up to 14 000 tons and are built using almost 7000 cubic meters of stone. It is 72m long, up to 25 m wide, and 9m tall. In addition, 11 chambers each have separate passages as entrances.

Only in 1850 was it identified as a tumulus. In 1955 because of its use as a quarry, some of the chambers were exposed, and in turn, so was its value as an archaeological site.  After the excavation work done between 1955 and 1968, the mound was restored to reflect much of its original qualities.

The Barnenez Mound is a sanctuary of ancient artifacts, art, and history. The chambers and passageways are adorned with engraved symbols. These images of snakes and U-shaped signs, and wavy lines resemble similar illustrations etched in other monuments, constituting a phenomenon known as Megalithic art.

Neolithic artifacts, including pottery and weaponry, have been recovered from the cairn. But, remarkably, in the Chalcolithic period, relics from a later age were found too.

There is minimal access to the cairn’s interior, which means the public doesn’t have access to the engravings and many artifacts. However, the public is encouraged to pass the rough opening, a meter 1m high. You’ll have to keep your head low to avoid hitting the stone above.  There are also guided tours, which provide some fascinating insight into its history and restoration.

If you’re hesitant because the visit should take only about an hour, you need not be. Age is not the only feature of the Barnenez Tumulus that makes it worth the visit. The structure has been described as resembling a hammerhead shark with its steep façade. In addition, the striking beauty of the form and its surroundings make it a great place to picnic and explore.

The six Neolithic barrows that comprise the Tumulus of Bougon date back to 4700 BC and are the oldest in Europe. Archaeologists discovered it in 1840. You can explore a prehistoric structure and the beautiful landscapes and views, as the site is located in a loop of the river Bougon.

Excavations on the site only resumed in the 1960s. The tumuli are a well-preserved example of ancient funerary architecture and provide us with great insights into how our ancestors deposited their dead and what accompanied them.

The necropolis comprises monumental graves made of stone and earth. Dolmens of earth made with stone slabs, weighing about 90 tons, cover the mounds.

Inside, you’ll have access to information about the site’s history, the evolution of man, migratory patterns, early tools, and shelters. While the reading material is mainly in French, audio is available, which may be helpful.

The Necropolis of Tumulus

Each tumulus is a different size. Supported by monolithic pillars, which also divide the space, the first tumulus is about 40m in diameter. The burial chambers were divided into three layers, where about 200 skeletons were discovered.  Along with the bones, many ancient artifacts and objects were also recovered. These included pottery beads, seashells, tools, and teeth.

The second tumulus contained skull caps in two rows. Finally, an interesting Neolithic find – two chests of stone and potsherds- was discovered near the mound.

Four skeletons were found in a section of the third Tumulus. So while there’s no burial chamber, there are still several burials.

The fourth tumulus is a fascinating discovery. It divides the necropolis into two sections, with the first three on one side and the remaining two on the other.

The fifth mound is trapezoidal, has two passage tombs, while the last tumulus is the largest in the necropolis and has three sections.

Built on a former Cistercian Priory, the museum creates a great space, celebrating the Neolithic period in which the mounds were constructed. It provides a wealth of information on humanity from this period, looking at the emergence of farming communities to new technologies and materials and crafts, such as pottery and weaving. The perfect addition to your prehistorical adventure, a 16-acre park comprising a beautiful botanical garden separates the graveyard from the museum. It’s particularly fascinating for those with a keen interest in history.

The adventure is never entirely done, as there is a discovery trail with recreated dwellings and even a fun maze for the kids. It’s great for a family trip as audio will keep the little ones entertained. The visit is affordable, and there’s a café available on site.

We hope you enjoyed our article on the world’s oldest buildings.

The original post for the oldest buildings in the world was written by Apex Window Werks and was enhanced by our research team.