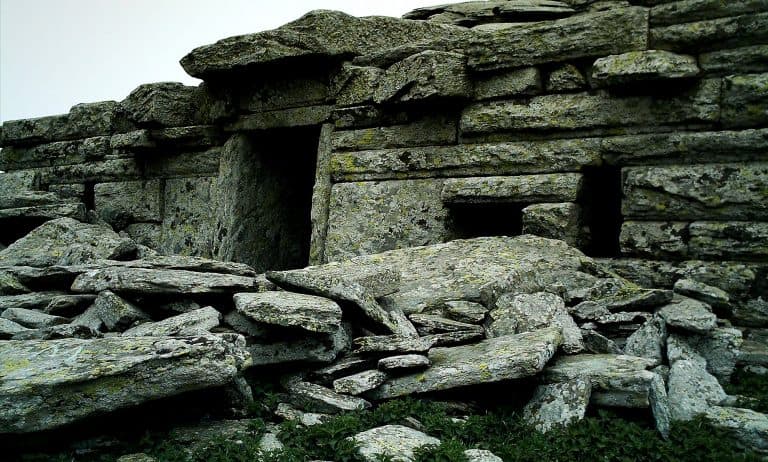 Let’s dive into a beautiful part of the Megalithic sites in Greece and the ancient history of Greece!

Mega what? Surprisingly the word Megalithic means “Big Stones,” and the name is Greek, like many used in science.

They are also known as Cyclopic (origins from the word Cyclop, which refers to a race of Greek giants). You may have read about Cyclop Polyfimos from the Odyssey.

While the word Megalithic people tend to believe is about buildings, it is also used for other construction works like tunnels.

So, there are those of the “Stonehenge type,” but not only. Unesco defines it as Megalithic; all the constructions are built with megaliths (big stones).

In Greece, the Megalithic sites are usually combinations and formations of various shapes and geometry.

While some resemble the front of a ship, others were used in aqueducts and tunnels. Others look like Stonehenge.

For example, they are built at a location of fantastic scenery, oriented with some star constellation, rocks are connected without some intermediate material (like mud or clay), they carry petroglyphs, and they seem perfectly carved to fit. Too perfect indeed.

Here is a list of megalithic monuments, which are a well-shared knowledge among archaeologists.

The Citadel and Lion Gate at Mycenae Megalithic Sites

This gate is known to modern culture as the Lion Gate because of the impressive sculpture that sits above it. The first person to excavate Mycenae and restore this area in 1841 was Greek archaeologist Kyriakos Pittakis!

The Eupalinos Tunnel is considered by many to be one of the most important engineering achievements in history.

It’s a 1036m long tunnel on Samos Island, Greece, built around 600 BC, which served as both aqueduct and sewer system for Pythagoreion city – supplying fresh water from Agiades spring.

That was achieved via pipes running beneath its streets before draining into baking pans outside various townhomes where they could drink without risk.

Megalithic Site of the Fort of Tiryns

The Cyclopes were known for their outstanding architectural skill, so it’s no surprise they built Fort Tiryns. The fort stands on the shore of an ancient ruin with other structures similar to its design—made by these talented builders!

You’ll be scaling an intense uphill route leading you to the peak of Mount Ochi, at the height of 1399 meters above sea level.

You can either continue by turning left, 3 kilometers after Metohi village along Karystos-Platanistos road, or take one final push to reach your destination in about five more minutes through gate number 23 before it locks tight for 24 hours each day.

The ancient structure of the Pyramid of Hellinikon is a unique phenomenon and an archaeological mystery. This location near Argos once led to Tegea, but now it’s just another forgotten stretch on what seems like an endless highway without much life in sight!

What’s the deal with all those ancient Greek ruins? You know, like King Minos’ Palace and Labirinto de los Profetas. Well, I’ll tell you – it was once called “Arcadia.” Why not visit our own megalithic Arcadian Gate right now? It’s an enormous portal between two sides of this vast circular courtyard in front of itself; there are no walls or ceilings nearby, so make sure to bring your camera if possible.

What are the three types of megalithic sites?

These were typically used for religious purposes or ceremonies from the Late Neolithic periods through Iron Age Britain’s classical era.

Why are there megalithic structures?

Megalith structures are an exciting type of stone construction that was used for many purposes. One use was to maintain continuity in harvest and crop, while other times, they served as an individual or collective megalithic tombs!

So, here is an intriguing question.

How did they lift the massive rocks in Megalithic monuments?

How were they placed and set with such accuracy? Some of them fit so perfectly that no paper leaf can pass through.

Also, read about the oldest buildings in the world and 4 Gates of Hades Locations Not To Miss in Greece.

This is a mystery that spreads worldwide, as many megalithic monuments exist everywhere, and Greece has its part.

Did you like our article on megalithic structures in Greece? Also, read 26 Things To Consider In Dating Greek Men.

Credits of the cover photo: konstantinosk