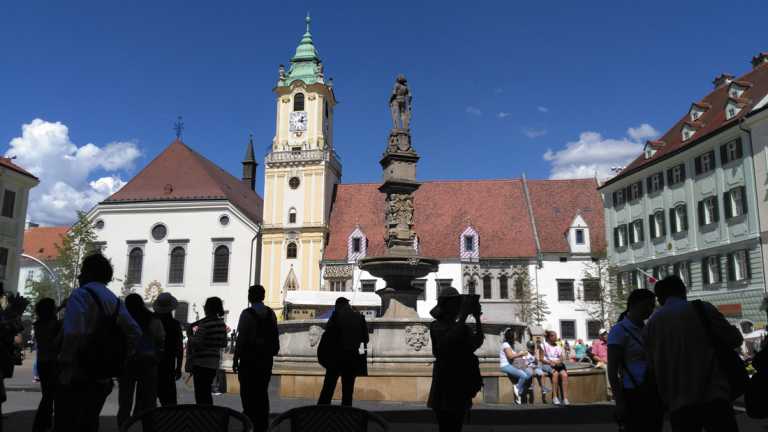 What are the things to do in Bratislava Slovakia in Eastern Europe? Bratislava is one of those European cities that may not be your first choice for vacations but is for sure one of the best to visit and explore its history.

The historical center of Bratislava, Slovakia, is full of art and things to see. The buildings are of great architecture. The city is the capital of Slovakia.

For anyone either staying in Vienna or having a -many hours- stopover there, to visit Bratislava is a must. It is just a 1 hour trip from Vienna (airport or city), and the cost of the bus is merely 5 euro one way.

We were flying to Greece from Belarus. There was a long stopover at Vienna, so we planned to take the late flight back.

That meant having around 9 hours before going back to Vienna to catch our flight.

Things to do in Bratislava Slovakia

Nine hours do not provide the complete picture, but it gives you a good range of things to do and see in Bratislava.

For example, some of the castles are a bit far from the city, so you need extra time for these.

Here is what we explored.

The interesting parts are not just inside the buildings. The city streets, along with the area outside of the historic center, are equally compelling.

The bus from Vienna will usually leave you at the Public Bus Central Station. From there it is 15 minutes walking time to the historical center of Bratislava.

This sign (a coat of arms maybe?) is located in one of the main entrances to the old city.

It was rather early at that time of the day, so we just went for breakfast.

We chose “Enjoy Cafe” at St. Michael’s Gate str. It has lots of organic things for breakfast and a pretty nice range of delicacies.

Some rain kept us inside for an hour, but soon the sun came out (so did the visitors of the city).

The city relates to the Austro Hungarian empire, as until 1918, Bratislava was part of the Hungarian Empire. After that, it changed hands, so it belonged to the Monarchy of the Habsburgs.

After the fragmentation of Czechoslovakia, the city of Bratislava was announced as the capital of Slovakia.

During World War II, the city got occupied by the Germans, and the Soviet soldiers later occupied it.

Bratislava Castle (Bratislavský Hrad) was built in its primary form at the end of the 8th century.

The castle is in a 10 minutes walking distance from the historical center, going uphill.

The view is excellent, though the castle itself doesn’t have many items to exhibit. It is completely renovated, and logically someone would be able to even stay there in our times.

However, by going through its history, the curious traveler will see how different nations occupied this area (like Celts, Romans, etc.).

The sky was clear eventually, and we could marvel at the flashing white and gold colors of the castle.

Below is the front of the castle.

Having the building at your back, you can see a pretty broad view of Bratislava.

This is another gate entrance to the castle (it has four). It is named: The Sigismund Gate.

When you enter the castle to visit the ground and upper levels, you will see these white and gold stairs of glory.

In some of the rooms, some paintings relate to the history and inhabitants of the castle.

At the underground levels, there are exhibits related to the Celts and Romans.

In the rear area are the gardens.

From the towers and top yards, more of Bratislava is displayed.

At first, you see the tower of St. Michael’s Gate.

Under the St. Michael’s Gate, you will discover the famous Zero Point (Kilometre Zero).

Marks of this style are all over Bratislava. For example, there are paths with little crowns that indicate the coronation path. Try to locate these little crowns.

Next to the St. Michael’s gate (at the right), there is a small door with a little sign that informs you of a museum.

The museum is hosted inside the tower. It ends up to the top with a splendid view of the historical center.

Go inside the museum. Walk the old wooden stairs. Explore every floor that hosts a limited number of items.

Eventually, you will reach the top. Aren’t these roof patterns interesting?

Those two essential museums were the ones we wanted to see.

Yet, that is not all. Our trip to Bratislava doesn’t stop here.

One of the things you will notice around the city, apart from the classical art statues, is an exclusive range of sculptures that blend with the city elements.

These four fellows below are a good example. Almost all are made of Bronze, except one that is silver.

This one (below) is known as the Čumil (which translates to “the watcher”). Others refer to the same as “Man at Work.”

The Schone Naci (below). That is the only statue of a real existing person who lived in Pressburg (former name of Bratislava) at the turn of the 19th and 20th centuries.

The Napoleon Soldier (below).

This style of bronze statues that are followed by a legend or a tragedy is all over Bratislava.

Try to locate all of them when you are in the city.

This church is also the Roman Catholic Archdiocese of Bratislava. You will find on the western side of the historical city center below Bratislava Castle.

Walk The City of Bratislava Slovakia

You need to allocate time to walk around and maybe stop now and then for some coffee or snack through the cobblestone streets of Bratislava.

Just stopping and observing people, even by sitting at a bench under a shady tree, relaxes you and gives you time to watch.

Below is the Opera, Slovak National Theater.

There are small gifts and local products shops in the main square.

The inner yard of the Primatial Palace.

Bratislava city architecture is attractive to those who seek such kind of beauty.

There are the famous red cars that can drive you through the historical center and by the bank of the Danube.

You can also experience a cruise through the Danube with one of those large riverboats.

After the sun came out, several happenings started in Bratislava. Here are 2 of them.

This one below took place in the central square (Hlavné námestie).

A happy team of children was dancing and singing Folklore dances in front of the Town Hall.

That was part of the Cultural Summer and Castle Festival.

These two photos below are from another street festival.

Men and women are dressed in costumes of a past era are cooking and sharing local delicacies with visitors.

You could also take a photo along with the well -and colorful- dressed women, or even get dressed as a Celt with swords, axes, and everything.

We had no idea how vivid this city is.

How to Get to Bratislava?

From Budapest: It takes 2.30 hours by train from Budapest and is the best way. Go to Nyugati station. The train stops at Hlavna Stanica (central train station of Budapest).

From Vienna: You can get a bus or the train or even a speedboat from Vienna, or rent a car and drive there. The train will get you there in one hour, while a -comfortable- bus will need 1.5 hours. Reasonable fees are around 15 euros.

Via airplane: Of course, you always fly to Bratislava. Compare prices from here.

Where to Stay in Bratislava?

That is one of the cities where the best choice is to stay in or very close to the historical center, as all the things you want to do are right there. These are good choices.

If you have a couple of days, also visit the Blue Church, the Slovak National Gallery, the Art Museum, and the Grassalkovich Palace.

It seems there are lots of things to do in Bratislava, and Slovakia in general, so we keep this open to visit again.

Did you like our post for Bratislava, Slovakia? Then also read The Country with the Most Castles in the World.