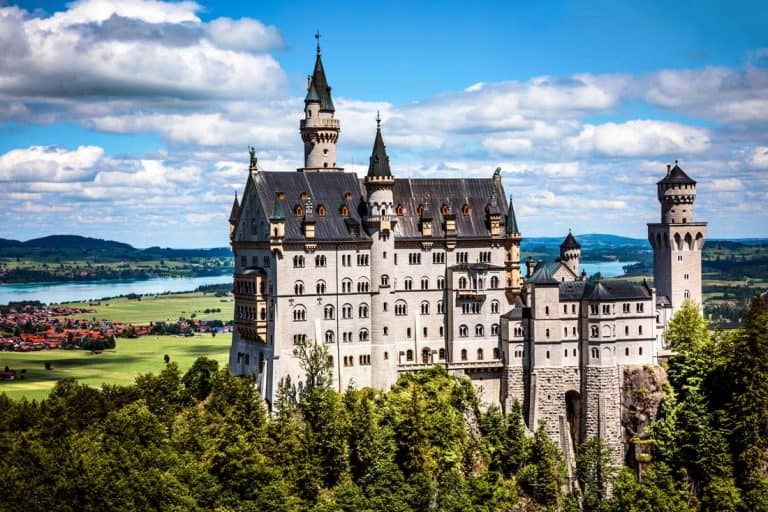 European history is beautifully preserved in the forms of thousands of castles, forts, sculptures, and monuments–standing proud to display the splendor of an archaic world. Do you know what country has the most castles?

There are many castles in Europe and fortresses in countries like England, France, and Spain, but Germany takes the lead for being the country with the most castles in the world.

Frequently Asked Questions for Country With Most Castles in the World

Which country built the largest number of castles in the world?

Germany holds the lead in building the largest number of castles globally.

When did the Great Age of Castles begin in Germany?

The Great Age of Castles began in Germany around the 9th to 10th century AD, when the country built many castles to boost the strategic defense of the country.

How many castles were built in Germany?

Around 12,000 German castles remain today, in either ruins or preserved states. However, the total number of castles built in Germany exceeds  20,000, making it the country with the most castles in the world.

Which is the oldest standing castle in Germany?

Burg Meersburg is the oldest standing castle in Germany, built in the 7th century.
In the following section, we will introduce you to some of the prominent castles in Germany, the country with the most castles in the world, famous for its architectural magnificence and historical splendor.

Landmarks of the Country With Most Castles in the World

Please find the top eight European castles located in Germany, each with its own glorious or dark history.

Standing proud in the heart of the Hartz Mountains, Wernigerode Castle is a medieval wonder built in the Gothic style.

It served as a temporary residence for royalty, especially the Holy Roman Emperors’ courts, and was later turned into a fortress during the Renaissance, around the sixteenth century.

With the lack of care and renovation, the castle fell to ruins in the coming two decades but was rebuilt thirty years later in Baroque style.

At present, Wernigerode Castle reflects the architectural inspirations of the eras when renovations were made to the castle.

The castle is open for tourists, with 50 rooms filled with period décor. Wernigerode Castle is surrounded by natural gardens and forests, which allow the tourist a scenic view while exploring this historical location.

Located in western Germany, Reichsburg Castle sits on the shore of the Moselle River, surrounded by lush green vineyards.

The castle was initially built around the 11th century but was brutally destroyed by the army of Louis XIV in the 17th century.

The remains of the castle were brought by a successful businessman in the 19th century and restored with a contemporary architectural touch.

The present-day Reichsburg Castle is an architectural blend of Romanesque and Gothic styling, with its octagonal towers attracting the attention of tourists across the globe.

Book a Panoramic City Cruise on the Moselle River.

Known as the Jewel of Germany, Neuschwanstein Castle is famous as one of the best fairytale castles in Germany. Neuschwanstein, also known as Swan-Stone Castle, was the castle model for Walt Disney’s version of Sleeping Beauty’s Castle.

The castle was initially built as a fortress in the 1100s; it was later converted into a royal castle by Bavarian King Ludwing II during the mid-nineteenth century.

Surrounded by lush Alpine trees and overlooking a serene lake, the castle stands proud today with its elaborate period furnishing and numerous adventurous activities it offers, including the chance to take a paddleboat around Swan Lake to commemorate the memory of King Ludwig.

Get a full-day trip and castle tour from Munich.

Another prominent German historical attraction is Schweriner Castle, sitting on an island in the middle of Schwerin Lake.

It is one of the oldest standing castles in Germany, built in 973 AD by the Slav tribes. The castle came under the ownership of the local dukes after battles between the Germanic tribes and nobility associated with the Holy Roman Empire.

The expansion of the castle grounds began around the 1500s when Duke Friedrich Franz II remodeled it.

The present-day Schweriner Castle is a remnant of the expansion completed by Duke Friedrich Franz II.

You can visit the remodeled castle with elaborate period décor to witness the grandeur and traditional lifestyle of the nineteenth-century dukes.

Get the Schwerin Tour with the Night Watchman.

Built at the top of a 70-meter-high (300 feet) rock, Burg Eltz is a historical wonder in the German region that attracts thousands of tourists each year, drawn by its unusual geographical positioning and architectural uniqueness.

Built around 1157 AD, Burg Eltz has mostly been under the private ownership of the Eltz family.

The privatized ownership of the castle has allowed the family to preserve the medieval authenticity of the castle, including its period furnishing and treasures of gold, silver, and porcelain.

The castle is a must-visit for individuals who love adventure and history. To reach the castle, tourists have to hike up to the Burg Eltz.

Once you reach the castle, the magnificent combination of timber and stone surrounded by Alpine trees creates a serene sight that offers absolute joy to its visitors.

Book a Day Trip to Eltz Castle from Frankfurt.

Standing proud on Mount Baden-Württemberg is Hohenzollern Castle, the ancestral home to the German Imperial family.

Also known as “House of Hohenzollern,” Hohenzollern Castle in Germany was originally built around the 1200s but was destroyed by external invasions during 1423 AD. The castle was re-fortified around 1454 but fell to ruins by the nineteenth century.

King Frederick William IV made the prime contribution to the fortification and enhancing the castle’s significance. He fortified the castle and converted it into a military complex by the latter half of the nineteenth century.

At present, the castle stands preserved since its nineteenth-century modifications with royal paintings, royal robes, and royal treasures decorating the interior of the castle, serving as a major attraction for the tourists.

Book a Full-Day Tour from Frankfurt to Hohenzollern Castle.

Considered one of the grandest castles built during the Renaissance, Heidelberg Castle in Germany is divided into two complexes constructed over a century. Starting from 1196, the upper castle was built, followed by the construction of the lower castle in 1225 AD.

The expansion of the castle happened around the time of Holy Roman Emperor Rupert III when he turned Heidelberg into a giant complex.

Unfortunately, the castle was struck by lightning and burned to the ground during the sixteenth century.

Even standing in ruins, the remains of Heidelberg Castle still attract thousands of tourists to witness its beauty. The tourists can still witness the castle gardens and courtyards and a couple of renovated buildings inside the complex.

A prominent attraction at Heidelberg Castle is Heidelberg Tun–built to store tax payments from local wineries; it was the largest wine vat worldwide at the time.

Standing in partial ruins, Darmstadt Castle in Germany was built around 1250 AD by Lord Conrad II Reiz. Numerous folk tales are associated with the castle, including the story of Johann Conrad Dippel, an alchemist who experimented with animal oils and sold them as an elixir of life.

The castle is also famously known as “Frankenstein Castle” for inspiring Mary Shelley’s novel Frankenstein. It is said that Shelly was inspired by folklore which led to the development of her protagonist character in the novel.

Living up to its reputation, the castle holds several scary parties and banquets around the year to entertain the tourists.

We hope you’ve enjoyed this quick look at the country with the most castles in the world and some of the famous castles you can find in Germany–there are so many more to explore!