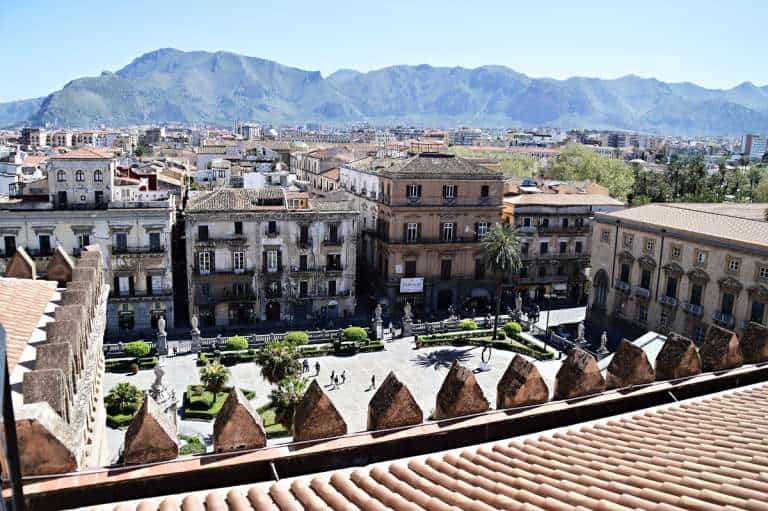 There is a considerable amount of things to do in Palermo Sicily.

Even board games like “Night Falls in Palermo.” Mafia is connected with this city, but that is the least from what this city has to show to a traveler.

It was our first time to enjoy “cannoli” and an exquisite vegetarian menu in a “fast-food” style small restaurant.

We visited Monreale, saw Palermo from church roof-tops, had a private tour inside the mansion of one of the oldest families of Palermo by its owners.

We walked a lot around the city, exploring all the things do in Palermo as a visitor.

Things to Do in Palermo Sicily

Make sure to have a couple of days, at least for Palermo. There are many things to do in Palermo and near the city. The Old city by itself is a separate experience.

You can explore many of the things to do in Palermo options with private tours. See here.

Explore the Old City of Palermo

You pass the gate of Porta Nuova of Palermo, a medieval gate to enter into the historic town center in Sicily, Italy.

Doing that seems to be a jump back in time as buildings and nature change.

A few minutes walking after the Porta Nuova, you arrive at the Duomo.

There you will find out that each city in Italy has its own “Duomo.”

Duomo means Cathedral. Each city has one.

Different styles characterize the Cathedral since Norman, Arabian, and Byzantine architecture as applied.

The temple was built on the site of an older basilica, used as a mosque in the 9th century, and largely retains the Norman style.

It is best to take the narrow stairs pathway (ticket is 5 euro p.p.) and get to the top.

From there you can have a good view of the surrounding historic center, but not all of it.

You will be able to see the influence of the additional Arabs style in architecture and decoration of the exterior.

Be at Quattro Canti

A Baroque square where the historic quarters meet: Loggia, Kalsa, Albergheria and Capo.

It is rather imposing when you are in the middle of it, but nothing more than that.

As you take the main road passing the Duomo, you will get to that point after 5 minutes.

We had no idea that this one of the top 2 things to do in Palermo.

It was discovered by pure luck.

We were strolling inside the historical center when we turned around a corner and saw a sign mentioning an old palazzo (palace).

We stood outside reading about what was that about, only to find out that it belonged to one of the oldest families of Palermo.

It was so beautiful looking at its inner yard.

A smiling girl (proved to be from Brazil) explained to us to whom this belonged and that every 1 hour, private tours were held (takes about 45 minutes).

That was one of the highlights in Palermo, and it was personal and with extreme care.

The tour (10 euro p.p.) was conducted by the son of the family, Andrea Federico.

His excitement about the history of his ancestors (even of his parents) was so vivid as we moved from room to room that took us in.

Each room has a unique story to tell, and he explained many of the historical facts that took place there.

There are lots and lots of rooms in this multi-floor palazzo.

Each room had a different decoration and theme. Ceilings followed along.

The weapons room. The family has a tradition of fencing.

Trophies room (one of many).

Countess was an opera singer (below right) and now is a triathlon athlete too.

Everything this family does is highly competitive and focus on achievements. On the left is Andrea Federico.

Everything in the palazzo was beaming importance and achievement.

We left the Palazzo Federico feeling lovely and positive.

That was a great feeling from such a private tour.

One of the morbid tours you can see. Decaying bodies everywhere, exposed. Even children (infants to teenagers). The reason for that? Catacombs were not just for priests.

From some point on in history, wealthy families used to “bury” their own in the same way.

Pictures were not allowed, and we didn’t take any.

We wouldn’t post them even if we had as some things need to remain inside the limits of ethics.

We don’t understand for the reason of such a place to exist, but many (even priests) claim that the idea is the “Memento Mori,” a reflection of mortality and the vanity of earthly life.

Near Palermo lies another Duomo (of course). Sicily is a highly religious place. This Cathedral is one of the most significant examples of Norman architecture anywhere.

It is also a UNESCO World Heritage Site, along with the Cathedral Church of Cefalù.

The outsides doorways and their arches are enriched with carvings and inlays as a  combination of 3 styles: Norman-French, Byzantine, and Arab.

We learned that the cathedral was built after a feud between the local religious leaders and the King. Different elements in the church point that out too.

For example, the seat of the King is higher than the one of the archbishop.

The painting behind the King’s seat shows Christ blessing the King, not the Church leader.

Therefore the King was considered directly under God/Christ and not the clergy.

You can explore many of Palermo Sicily options with private tours. See here.

There are lots of (pasta/pizza/trattoria) places to eat in Sicily as in the whole of Italy.

But we checked to find a place to eat, and the Mercato Excelsior was famous. It is a Mall.

The Mall had different small “fast-food” restaurants with varying options of food to eat. But fast-food in Italy doesn’t mean low quality as in other countries and the food was delicious here.

We went to the 2nd floor and noticed a small Vegetarian style restaurant with just a few tables.

We ordered a series of dishes, so to try as many as possible and it was delicious food at very reasonable prices.

Even the dessert was something we never heard before (apple with onions, in some sweet syrup).

While you walk up and down the streets, you will be tempted to get into the many small “dolce” shops and get some cannoli.

Well, I did get some cannoli. There are traditional and any-flavor-you-like options.

Palermo is an exciting city with lots of history, tightly weaved with religion and drama. There are even Mafia tours to take!

Which Organized Tours to Get from Palermo Sicily

If you need a guide to take you around, then these tours are for you. Perhaps Palermo is a case where such tours are a necessity.

What are the Best Hotels in Palermo Sicily?

The following are a series of accommodation options for all tastes and budgets. These are handpicked and well researched.

Do enjoy your time and things to do in Palermo Sicily and lets us know what you think!

If you travel abroad, don’t forget to book your flight and accommodation for your things to do in Palermo. Make sure you get travel insurance too.

If you are an extended traveler, do see these travel resources.