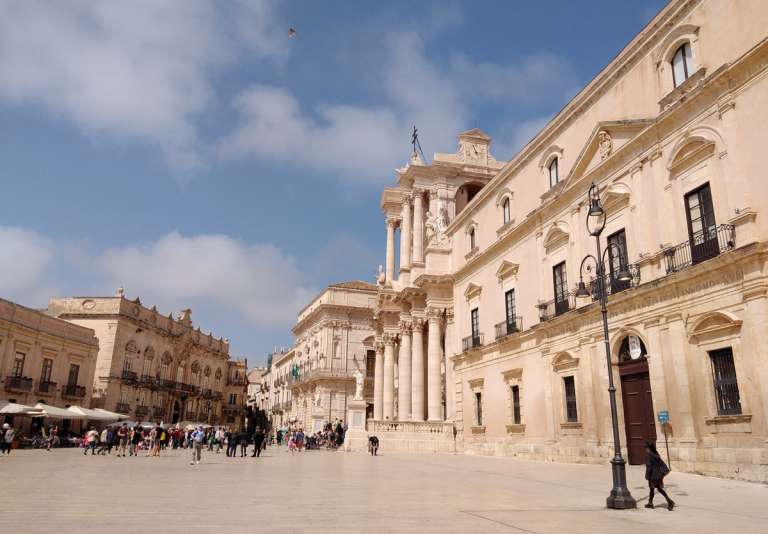 Syracuse is a place related to both art and torture. We visited Syracuse Sicily during our trip to many cities in Sicily, Italy, and we love you to read about the things to do in Syracuse Sicily.

Once you get to the archaeological place, you will have to visit Ortygia (Ortigia), 10 minutes from the site.

The island of Ortygia is the actual old city of Syracuse and one of the most beautiful and traditional-looking towns in Sicily, Italy.

It is a 10 minutes drive from the archaeological site.

What Things to Do in Syracuse Sicily

Allocate time to walk in and around the city of Ortygia and visit the ancient quarry, the old Greek theater, and the Roman amphitheater.

The ancient locations are in the same area altogether.

Ancient Quarry of Syracuse, a Place of Torture

That is the location where war prisoners were kept. Now covered with green looks like a lovely spot, but it was not like that.

Just get to the bottom of it and explore the caves, and you will understand why. It was called the Latomie De Paradiso.

Among the caves exists one that was called “The Ear of Dionysius.” Dionysius was the tyrant of that era.

He placed all enslaved people inside this cave, which, due to its fantastic acoustics, made it possible to hear all the discussions of the enslaved people.

Indeed the cave has the shape of the interior of a human ear. Walk in and tear a piece of paper. The sound is astonishing.

See this video from inside the cave and note this experience as one of the things to do in Syracuse Sicily.

Until some point, it was permitted to climb to the cave interior top to better experience the acoustic behavior of this place, but this stopped due to safety reasons.

The Greek Theatre of Syracuse

That is one of the top things to do in Syracuse Sicily. There are two theatres in Syracuse: The Greek and Roman ones.

The Greek theater lies on the slopes of Temenite hill, on the other side of the quarry (5 minutes walk).

The theater was built in 5th BC and is one of the largest in the world.

Today it hosts classical Greek plays during May and June.

At the top is this spring which -in the past- used to pour drinkable water.

Carved inside the mountain are these small round-shaped holes which were tombs!

They were tombs; only heroes would be buried.

The Roman Amphitheater of Syracuse

Very close to the Greek theater is the Roman amphitheater.

The difference between a theater and an amphitheater is this: The latter has seats from both sides.

When you see an amphitheater, it is always of Roman origin, not Greek.

Greeks had theaters only (with seats on one side and the stage on the opposite).

An island connected to Sicily with three bridges comes with the typical (yet magnificent) architectural elements from Normans, Arabs, and Byzantines.

The city of Ortygia also hosts the ruins of the temple of Apollo.

You will love to walk through its alleys and in the main square.

Ortygia was colonized by ancient Greeks (2700 years ago), who also fortified it.

Soon Ortygia became a significant and rapidly growing Mediterranean city. You can see the Castello Maniace at the far end (below).

In fact, for some time, Syracuse (Siracusa) was the most powerful and prosperous Greek city in the Mediterranean.

Ortygia is a UNESCO World Heritage Site, a distinction that is certainly deserved. It hosts numerous archaeological sites.

Among them is the oldest and most beautiful piazzas in Sicily, the Piazza Del Duomo.

Walking all around Ortygia is one of the best things to do in Syracuse, Sicily, and keep reading to see why.

A Catholic church in Syracuse, Sicily. Its structure was originally a Greek Doric temple.

The church is a UNESCO World Heritage Site.

It dates back to the 5th century BC. The cathedral was built around the ancient Temple of Athena.

The church is at the heart of Ortigia island, very close to the cathedral. Saint Lucia is the patron saint of Siracusa (Syracuse).

The church houses the painting titled “The Burial of Saint Lucy,” one of Caravaggio’s most famous paintings.

The temple and monastery were utterly destroyed after an earthquake in 1693.

Immediately the nuns started rebuilding it, which was completed ten years later (1705).

Siracuse (Siracusa) was the home of the famous mathematician, astronomer, and inventor Archimedes.

The piazza is dedicated to him.

In the center is the fountain of Diana, built to honor the Roman goddess Diana (Artemis for Greek). It depicts the myth of the nymph Aretusa.

It is considered the oldest Doric temple in Sicily.

The temple changed between different styles during the ages.

It was converted to a Byzantine church, a Muslim mosque, and then to a church again (during the Norman occupation).

The Outdoor Market of Syracuse Sicily

If you are early in the city, you have an excellent chance to see the open market with lots of fruits, seafood, and different kinds of treats.

Get some fresh food for your walks.

If you are afraid of getting lost in Ortygia, then don’t be.

Walking in any direction will get you to the city center, the seafront, or three bridges.

The city is built to be easy to navigate and virtually impossible to get lost.

By the way, eat as much “gelato” as possible.

FAQs for Things to Do in Syracuse Sicily

We hope you will enjoy all the things to do in Syracuse and Ortygia in Sicily.

Don’t neglect to read our suggestions for Cefalu and Agrigento.