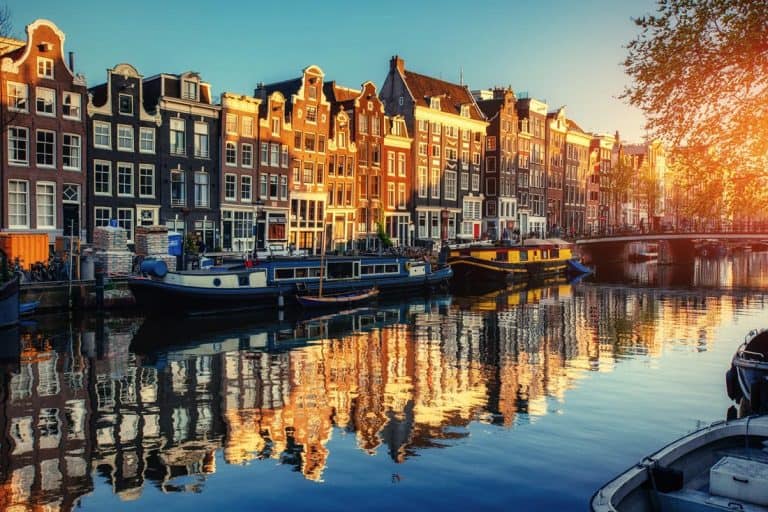 The streets and parks are bustling and the canals are full of locals and visitors alike – It feels like everyone is enjoying the city’s electric atmosphere in the summer sunshine!

Amsterdam is one of the best places to be in Europe in the summer as the whole city comes to life after the long Dutch winter. Read how to spend 2 days in Amsterdam. or, if you have the time to stay 3 days in Amsterdam with a different itinerary.

There are a huge number of things to do in Amsterdam in the summer, from festivals and events to must-do activities – here are some of our highlights for the Amsterdam summer.

Rent a Boat to Experience Amsterdam in the Summer

During the warmer months, the city’s beautifully historic waterways are the place to be! Lots of people in Amsterdam own boats and it’s difficult not to be envious as you watch them sailing along from a bridge.

The good news, however, is that you too can enjoy sailing in Amsterdam with Starboard’s Amsterdam Boat Rental.

Get a bunch of friends together and get on board their luxury boat to enjoy sailing through the city’s famous canal belt with plenty of ice-cold beers or delicious wines!

As you sit back, taking in the sights of the city with a cold drink in your hand, you’ll feel at the top of the world!

Many of the city’s best-loved sights and attractions are based along these waterways and the Amsterdam canal belt forms the historic center of the city.

For centuries, the famous canals have brought merchants ships into the city from all four corners of the earth and the wealth accumulated from this trade is clear to see.

The towering, wonky houses still loom over the canals and this iconic and unique architectural mix has inspired artists for hundreds of years.

Whether you’re exploring by boat, foot or even bike, be sure to look up and take in these magnificent buildings!

Day Trips during Amsterdam in the Summer time

There is much more to this country than just its capital and, despite the fact that the majority of visitors stay in Amsterdam, during the long days of the summer months it’s definitely worth taking the time to explore.

The Netherlands has beautiful countryside, quaint towns, and villages and an incredible coastline.

If you’d like to explore more of the Dutch countryside, check out the famous Amsterdam windmill tour, which takes you on a grand day out to explore the country’s most famous villages and windmill-dotted countryside.

For day trips from Amsterdam to other cities in the country, consider Delft, Leiden, The Hague, or Haarlem!

Experiencing Amsterdam in the summer comes packed with some fantastic festivals and events. Here are a handful of highlights of these action-packed months!

Amsterdam Gay Pride is one of the biggest and best-known Pride celebrations in the world. Unlike most pride parades, the Amsterdam celebration takes place along the city’s canals by boat!

Millions of people come for this event and the city’s waterways are lined with cheering crowds before the city descends into a night of crazy parties that last till dawn!

Aside from King’s Day, Pride is the biggest annual event in the city and regularly welcomes over half a million visitors.

Tolerance and liberalism have long been an important part of Dutch culture and this event has symbolized this for decades.

The Netherlands is well known for its music festivals.

This small country has produced more top DJs than any other and this culture of dance music extends to its fantastic festivals. Some of the best include Awakenings, Milkshake, Loveland, and Dekmantel.

Techno and House Music have been an important part of the Dutch musical landscape since its conception and this is reflected in the city’s festival scene.

If you’re planning on coming to Amsterdam for a festival, why not book an extra couple of days either side so you get to check out everything that the city has to offer besides the festival ground?

There are a few theatre festivals throughout the summer months (mostly outdoor) so there’s plenty for drama lovers to enjoy.

Some of the best known and highly regarded are De Parade Theatre Festival (taking place annually in Martin Luther King Park) and the various events put on by the Vondelpark Open Air Theatre (a variety of performances in the park throughout the summer months).

There are some great food festivals each year in Amsterdam in the summer. The first of these is Rollende Keukens  (Rolling Kitchens in English).

This festival really marks the start of the summer season and turns Westerpark into one big culinary paradise, as a variety of food trucks set up shop for the weekend.

This festival offers much more than just food, however, and you can kick the summer in Amsterdam off in style – the parties last late into the night.

Another great food festival is Taste of Amsterdam – taking place in Amstel Park, this event is where a number of restaurants from around the city exhibit their finest haute cuisine at affordable prices.

It’s less down-and-dirty than Rollende Keukens (don’t expect to be dancing the night away with a canape in hand) but nonetheless a great event for food lovers.

Amsterdam’s markets are well known for their great food.

If you like to try fresh local food, look no further than Albert Cuyp Markt, Dappermarkt or Ten Katemarkt and be sure to indulge in some of the local specialties on offer – kibelling (fried pieces of fresh fish), the famous herring (be sure to hold them by the tail and gobble them mouthful by mouthful like the locals!) or freshly prepared sweet treats like poffertjes (mini Dutch pancakes) or stroopwafels! Yum!

Get some fresh air and enjoy the sunshine in the city’s most beautiful green spaces and urban beaches!

The Amsterdamse Bos (Amsterdam Forest) is the city’s biggest green space and you’ll feel a million miles away from the bustle of the city in this wooded oasis.

Explore by bike or take a stroll and a picnic! You can also swim in the Amsterdamse Bos’s lakes – the perfect place for a refreshing dip on a hot day.

Amsterdam has quite a few urban beaches, which are often overlooked by visitors as they can be quite well hidden.

Some of the best are the zwemstrand at Sloterplas Lake, manmade beach bars such as Roest and Pllek and, local favourite, Blijburg aan Zee.

If it’s a hot day and you want to chill with sand between your toes, stick your swimming trunks on and head to the beach – they’re all easily reached by public transport despite looking a bit out of the way.

Explore the narrow city streets as the sun goes down…

Amsterdam’s naughtiest and most infamous neighborhood really comes to life during the summer months.

If you want to take a look around before grabbing a beer on one of the sun-drenched terraces that line the canals in the oldest part of the city, you’ll be spoiled for choice!

As the sun goes down, the Red Light District is actually surprisingly beautiful with its leaning houses, quaint bridges, and cobbled streets.

This is the oldest part of the city and, although it is known for its window brothels, coffee shops, and general debauchery, there’s something to see for everyone and the area is well worth checking out.

To get a really great view of the medieval heart of the city, climb up the tower of the Oudekerk (built-in 1213!).

Get a feel for the city’s cultural contributions at the best Amsterdam museums.

Amsterdam is a major cultural capital of Europe and the city is home to more museums per square mile than anywhere else on earth! Check out these cultural gems:

The Van Gogh Museum is home to the masterpieces of the Netherlands’ most famous painter.

Situated in Museumplein, this museum overlooks a big green space where hundreds of local people gather to enjoy a picnic or drink so after you’ve taken in some of the world’s best-loved art, you can lie down on the grass and enjoy a budget-friendly lunch!

If the weather’s beautiful and you don’t want to be indoors, Amsterdam has plenty of street art to enjoy whilst exploring the city.

Some of the best can be found in Amsterdam Noord- just a short ferry trip across the Ij to NDSM from Amsterdam Centraal.

Alternatively, check out the Rijksmuseum’s gardens or the giant carvings in Vondelpark (both free) to enjoy outdoor sculpture art.

Whatever you decide to enjoy out of the many things to do during Amsterdam in the summer, be sure to take the time to sit back with a nice cold beer and soak in the atmosphere as well as the sun! Life is just that bit sweeter when you’re lucky enough to be in Amsterdam in the summertime – enjoy every minute of it!

Also, read After Hike Recovery: 10 Essential Tips on How to Ease the Agony.