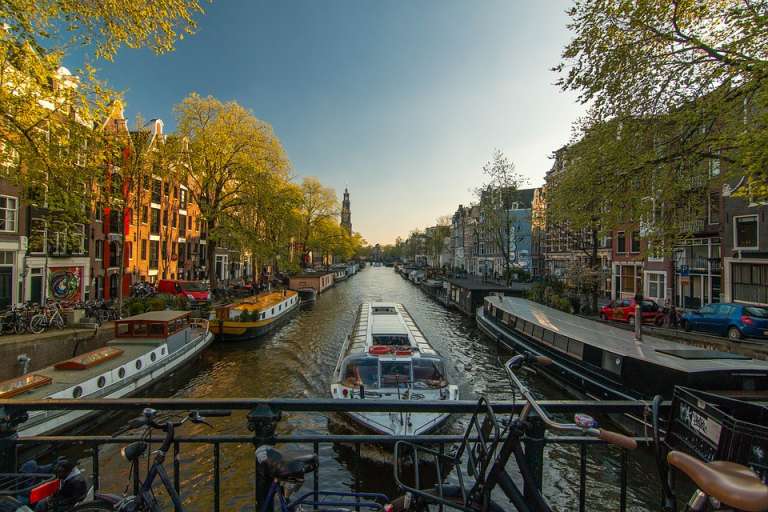 Is it enough to spend only 3 days in Amsterdam?

From its brick buildings, rich history, open skyline to the relaxed and easy-going attitude towards life, Amsterdam is the perfect location for your travels.

There is so much to do, see and eat, plus the ethnic diversity, culture top off one of the best vacations ever.

Also, as one of the leading commercial capitals of the Netherlands (Holland) and a highly rated financial center in Europe, Amsterdam is one of the best cities in the world.

Amsterdam is ranked as an ‘alpha world city”, and it is also the cultural capital of the Dutch as well.

Various Dutch companies such as Phillips, TomTom, and more have their headquarters in the Netherlands.

Simply put, Amsterdam is one of the best travel destinations in the world today. If two days is too much for you, then read this post for spending just two days in the city.

Home to various tourist spots and delicacy spots, you are simply spoilt for choice when it comes to visiting the famous Dutch city.

The following are some of the best activities to consider during your 3 days in Amsterdam.

There are over 450 fantastic Amsterdam guided tours. Have a look here.

Here is your guide to Amsterdam.

Day 1: What to see in Amsterdam

Started in 1865, VoldenPark is one of the most popular tourist destinations in the Netherlands.

While the park was initially referred to as `Nieuwe park,` it was later renamed to `Vondelpark.`

As one of the favorite tourist destinations in the country, the park hosts as many as 10 million visitors each year.

The park comprises various attractions, including a playground, open-air theatre, and more.

Additionally, the park also features an `open Dutch theater,` which often has various entertainment shows throughout the year.

Some of the performances at the theatre might include musical shows, classic arenas, pop music shows, and more. The theater receives funding from the Dutch government.

While all performances often guarantee free entrances, visitors are asked to donate one euro.

Even more, each Friday, the `Friday night skate` event starts, which is very popular among the Dutch Locals.

Other events include the year golf tournaments and running competitions at the park. On April 27 each year, special celebrations are dedicated to children, where they can access various types of children`s activates.

The Anne Frank House is also one of the favorite tourist spots in Amsterdam.

To be specific, the Anne Frank House is a writer`s house and a biographical museum that is reserved for a famous writer referred to as Anne Frank.

The building is found in central Amsterdam, which makes it an even more lucrative destination. It’s important to note that, during World War II, Anne Frank escaped Nazi persecution with her family in the various rooms in the 17th-century house.

The private rooms are referred to as the `the Secret Annex.` That said, Anne Frank never survived the war. Late in the nineteen fifties, the Foundation was started to help preserve its unique heritage.

Officially opening the 1960`S, the museum serves as one of the most notable souvenirs in European history.

According to recent reports from 2013 and 2014, the museum received an average of 1.2 million visitors. Mark this place for your three days in Amsterdam.

Check accommodation prices for your 3 days in Amsterdam via Booking.com or Hotels Combined.

Found close to the Rijksmuseum, the `I Amsterdam` letters are also one of the most notable sites in the city.

It states inclusion for all residents regardless of their places of origin. In most cases, the area is often crowded with people from all over the world trying to get the perfect photo.

Once you through with the taking photos at `I Amsterdam` letters, consider taking a stroll through the various museum and fashion spots that are close within.

The Van Gogh museum and the Rijksmuseum are excellent examples. Additionally, you may also come across various unique shopping zones in the area.

The Bouchon du Centre is where the famous Hanneke Schouten runs a show that attracts people from all over the world.

People are entertained by sitting on unique bentwood chairs, and various tables that are embellished with checked cloths.

This is similar to a home kitchen, where you can even enjoy potluck from saucisson, pieces of bread, pork, and various types of meats.

Based on admissions from Haneke, the food at these spots is not ideal for fussy people or vegetarians. It is the perfect spot for enjoying luscious lunches and meals.

Also consider eating meals at `goodies,` which is a local favorite in Negen Straatjes.

The shop is found between various canals and shoppers and take a break from shopping and enjoys different types of meals — some of them, including salads, vegetarian sandwiches, cakes, and more.

Day 2: Amsterdam, What To Do

Jordaan is also another favorite tourist sport in Amsterdam. In particular, the area is bordered by various canals such as Rozengratch and Singelracht as well.

Initially, the location was a working-class neighborhood but had, over the years, become a luxurious location in the Netherlands. Jordaan is home to various art gallies, especially for modern art galleries.

It is also home to various specialty shops and restaurants as well. Besides that, Markets are also continuously held at the Noordermarket, which is a textile market.

Perhaps one of the most notable names in Dutch history, Rembrandt, spent most of his last years at Jordaan.

The Rijksmuseum is a Dutch Museum for history in Amsterdam.

Located in the Museum square south of Amsterdam, the Van Gogh Museum is perhaps one of the best tourist spots in the city.

The museum was started in The Hague in the seventeenth century and later relocated to Amsterdam a few years later.

The current main building was designed by a man known as Pierre Cuyerpus.

Just a few years ago, the Museum underwent a renovation that cost an average of € 375 million. In the years 2013 and 2014, recent statistics show that the Rijkskeum was the most visited spot location in the Dutch.

The average population is averaging at 2.2 t0 2.5 million visitors.

Another exciting aspect of the museum is that it has on display well over 8,000 items that depict Dutch History.

Some of the items have an average age of 1200 to 2000 years, with some of the big names, including Rembrandt.

Check accommodation prices for your 3 days in Amsterdam via Booking.com or Hotels Combined. There are over 450 fantastic Amsterdam guided tours. Have a look here.

For those who are not aware, Leidseplein is a term which otherwise refers to Leiden Square in English.

The town is located in the southern areas of the city, and it is well known for being full of life. In particular, the city has an exceptional transport hub, shopping zones, and fantastic nightlife.

More so, Leidseplein is also referred to as the `entertainment square.`

Perhaps one of the most notable aspects of the city is that it is also filled with various street performers. The performers are often engaging in dancing activities to entertain visitors.

The city also has various bars that are perfect for winding down. Besides that, several food stalls sell hot and fresh meals, especially during the cold winter months.

More so, the streets of the Leidseplein square are also filled with various types of exotic meals, including from the Chinese, Italians, Argentineans, and more.

You can also find various high-end restaurants throughout the square, such as Café America. The café is located close to the Eden Amsterdam American Hotel.

Day 3, in your Amsterdam Itinerary

Huis Marseille is perhaps one of the only museums in Amsterdam that house only photography.

The museum was started in 1999, which makes it one of the newest museums in the city.

On average, the museum has well an average of 4,900 photographs. While the museum is mainly focused on the history of the photography niche, it also houses various modern-day photographs.

The art collection in the museum is categorized into six main sections, with a unique pattern design. The museum might make a home-like appearance; it still has a unique art gallery design thanks to the unique structure used to display the artworks.

The museum might have a french inspired name, but it houses pieces of art from various locations all over the world.

As a result, it attracts audiences from as many different parts of the world as well.

In this way, one can keep themselves updated on the various pieces of art that are displayed in the museum.

For children, gaining access to the museum is free of charge. Additionally, adults will have to pay a small amount of 5 Euros. The museum is open throughout the week except for Sundays.

Attend a live theatre show at the Concertgebouw

The concert hall was developed in 1888 by Al Van Gendt, who borrowed various concepts from acoustics to come up with the theatre.

Perhaps one of the most notable aspects of the concert is that it has received various exceptional reviews over the years. Shows at the concert average at free half-hour concerts that occur on Wednesdays from midday during mid-year.

Those who are 30 years or younger can queue up at the `sprint` section of the show. Tours of the concert will reveal various meaningful insights about the history of music.

For instance, it does well to show that while Van Gendt had limited experience in knowledge, he gave the hall some of the best acoustics designs. Various musical professionals.

The museum comprises a host of unique attractions. Some of the main ones include the baroque trim panels. Such consists of individual panels with the names of various big names in the classical music industry.

It also comprises of a massive pipe organ and unique staircase, which music composers can use to descend to the stage.

Though The Hague may seem like a court of law, it is classified as a city.

Apart from attracting headlines on national news broadcasting stations, The Hague is also one of the best spots to visit in Amsterdam.

It is filled with a host of unique attractions that make up for a truly fantastic tour experience. Why does the city have `the` in its name?

Well, this comes about due to the unique nature of the Dutch language. With a population level averaging at 500,000, the city is also the home to the Dutch Royal family and the Dutch State as well.

The Hague is also home to various types of cultural offerings, such as the Jan Vermeer paintings.

Additionally, The Hague is also an international symbol of justice and peace.

In fact, since late in the 19th century, The Hague has been crucial in the fight for democracy. It hosts some of the most popular International Courts in the world since early in the 1920s.

The rich history and the international law culture all play an essential role in making The Hague one of the preferred tour spots in Amsterdam.

Check accommodation prices for your 3 days in Amsterdam via Booking.com or Hotels Combined. There are over 450 fantastic Amsterdam guided tours. Have a look here.

Wrapping up the 3 Days in Amsterdam Itinerary

Amsterdam is perhaps one of the best vacation spots in the world.

Spending 3 days in Amsterdam, should, therefore, be one of the best travel experiences in your life.

Remember to carry with you a camera or perhaps a journal that you can use to document your experiences in the city of Amsterdam.

Why don’t you check Germany too? It is just around the corner.