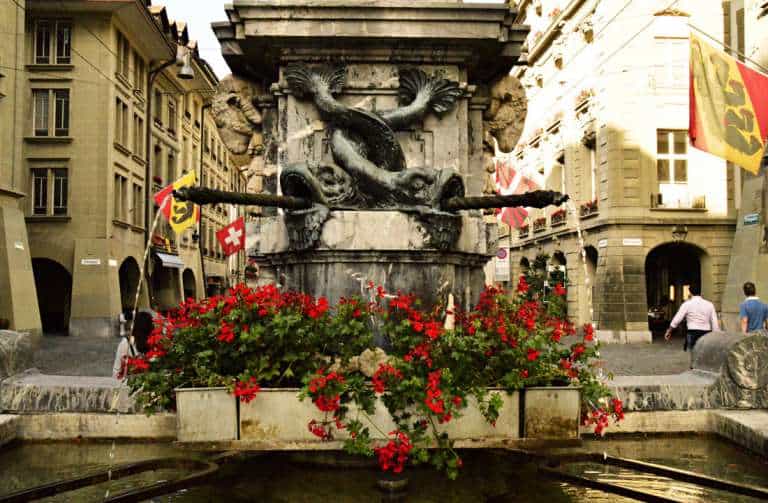 We were wondering about what are the things to do in Bern Switzerland and enjoy it?

We did our homework in order to make the best out of 2 days in Bern. You know what? Bern was really promising prior to getting there and proved fantastic being there too.

Bern is a destination to experience one of the most wonderful European Christmas markets.

The old city of Bern in Switzerland is a UNESCO World Heritage site.

What is there to see in Bern Switzerland?

Bern, in Switzerland, offers a variety of activities to participate in.

The place is beautiful. It is a place where lots of fun is available and a destination good to blow off some steam.

Therefore, if you are wondering what to do while in Bern, Switzerland, here is a list of activities that you can take part in. Bern has a variety of sites to visit, some of which are listed below.

We visited almost all of Bern attractions, so enjoy the photos.

What to do in Bern Switzerland: The Old Town of Bern

One of the primary attraction site that you can visit in Bern, Switzerland is the Old City of Bern.

The old city of Bern is the federal city of Switzerland and the capital of the Canton of Bern, which is located on the Swiss plateau between the Jura and the Alps.

The Old City was founded in the 12th century and situated on a hill that is surrounded by River Aar. The city has experienced tremendous growth over time.

Below is the Bern Minster. You can get to the top of it and have a really nice view of the city of Bern.

We got up there and really got some great views of the city.

Berne has developed along the lines of exceptionally coherent planning principles.

The establishment of Bern reflects the slow conquest of the site by urban extension somewhere between the 12th and 1st century hence making the place an impressive example of the high middle ages about the foundation of a city.

The features of the town were later modified to imitate the 16th century.

The old city of Bern is a clear example of a city that has been able to conserve its medieval urban structure while responding to overtime to the increasingly complex functions of a capital city of the modern state.

The city has been able to maintain its authenticity for so long hence making the city even more attractive to visit.

What to Do in Bern Switzerland: Historical Museum of Bern

Another exciting place for you to visit while in Bern is the Bern National Museum in Switzerland, which is one of Switzerland’s most significant art historical museums.

The museum has permanent collection features that highlight different fields from archaeology to prehistory and early history as well as ethnography.

The museum has many ways to show its exhibits including audiovisuals.

Bern Historical Museum is also called the Einstein Museum and is well known for presenting the life of the famed physicist in an exhilarating way within the context of world history.

In addition to all this, the museum has an extension, called the Kabus that was created in 2009 which complements the museum park perfectly regarding architecture.

Despite its modern shape, the place still represents a fascinating contrast to a castle built in late 1894. All these features of the museum give it the perfect spot to visit while in Switzerland.

If you like museums then additionally visit the Zentrum Paul Klee. The museum is dedicated to the artist Paul Klee, and is designed by the Italian architect Renzo Piano.

What to See in Bern, Switzerland: The Zytglogge

The Zytgogge is a landmark medieval tower in Switzerland that was built in the 13th century.

This tower has served the city as a guard tower, prison clock tower and Centre of the urban life and as a public memorial. It is located in the old town of Bern.

The clock tower (zytglogge) was the first western gate of the city, somewhere between 1191 and 1256 and with its famous astronomical calendar clock that was built in 1530, is now one of the main attractions of Bern and among the oldest watches in Switzerland.

It has served as the master clock for the city of Bern and hence set the standard.

What to Do in Bern: Baren Park

You can start your afternoon with a visit to Baren Park, which is also known as the “Bern Bear Park”.

This park is known far beyond Switzerland as it consists of bears in the park.

From the year 2009, the bears in the park have a modern 6,000 square meters park at their disposal, which they can easily access through a tunnel.

Ever since 1513, bears have been at home in Bern up until 1857, then they were relocated in the bear pit and then since 2009, in the new and spacious bear park.

The site on the banks of the Aare stretches from the former bear pit opposite the old town to the river. The entire bear pit is now wheelchair friendly all thanks to a lift.

This park, being listed as a federal cultural asset of national significance, remains at the bear’s disposal. If you wish to go round the old pit as well as the new pit, you are presented with the opportunity to do so.

As a tourist, you can be provided with guided tours after you have booked your reservations whereby you will be learning plenty of interesting things concerning the history of the bear park.

The Place to Visit in Bern: The Einsteinhaus

The Einsteinhaus is a museum as well as a former residence.

That building is located on Kramgasse no. 49 in Bern Switzerland.

One of the flats on the second floor was occupied by Albert Einstein, his wife Mileva Maric and their son Hans Einstein from 1903-1905.

The Annus Mirabilis papers, which contributed significantly to the foundation of quantum physics, were written down here while he worked at the Federal Institute of intellectual property.

Everything that was in the house including all the furniture’s is still in place on the second floor of the building.

This includes all his life’s work, and his biography is still in the apartment. So if you are more into gaining more knowledge as you explore, this is the perfect place to visit.

Things to Do in Bern: Bundeshaus

The federal palace refers to the building in Bern as the Swiss general assembly and the national council.

The structure consists of a central assembly building and two wings housing government departments and a library.

Although the Bendeshaus is Switzerland’s seat of government, it also offers a wide range of entertainment and even opportunities for locals and visitors alike.

The Switzerland parliament was built by the plans of the architecture and was completed in the year 1902. The place also consists of a lot of symbolic depiction of Swiss history.

After undergoing extensive renovations, the seat of the Swiss government has been gleaming with new resplendence since 2008.

In case you want a guided tour of this lovely visit, all you need is to make your wish be known in advance.

This is perfect to visit if you’re going to learn more about the federal government of Switzerland.

What to do in Bern: Rose Garden

The rose garden is a beautiful park filled with flowers of all kinds giving it a unique sense of comfort if you visit the park. The garden offers the perfect place to unwind and feel at ease with yourself.

One of the funny and interesting things in this garden of Bern is the bench was Einstein was sitting and “smelling the roses”.

There is a different kind of roses, almost closest to 220 types of irises and moor beds with 28 different types of rhododendrons.

From 1765 to 1877 the rose garden served as a cemetery, but as time went by from 1913, the rose garden became a public park resplendent rich with the beauty of flowers and a pond.

The rose garden also has a pavilion and reading garden, which provides a perfect place to relax.

Wondering what things to do in Bern during your visit? There are around 20 guided tours to choose from if you don’t want to plan all by yourself. Follow this link.

Check for prices on accommodation when you decide what to do in Bern, Switzerland from here and here. Always get travel insurance!

Hiking and Riding in Bern

The above places are not the only activities you can involve yourself in a while in Bern, Switzerland.

You can enjoy other quite exhilarating things to do in Bern. There is a wide range of places that you can choose to hike, and you will be guaranteed an adventure that you will always remember all your life for you and your family or friends.

Some of these places that you can choose from are the Eiger trail and get to have the Swiss Alpine experience trail.

Another area is the Napf region, which offers the Emmentaler ridge walk.

Finally, yet importantly, there is the way of St. James Schwarzenburg all of which have amazing experiences while hiking.

All these places will give you the perfect opportunity to bond with your family. The good thing about them is that you will also have a chance to exercise your body!

Things to Do in Bern, Switzerland: Conclusion

A good thing about Bern is that you can cycle around the city and get to see all the historic sites and all those breathtaking views that will blow off your mind.

You can do all this on your own will at your own pace without being dragged behind by people.

Also, Bern in Switzerland has excellent restaurants that you can visit and dine with your group. Their menus are finger-licking good.

These restaurants will give you an opportunity to experience the culture of the Swiss people, which I am quite sure you will find interesting, and you will enjoy it.

Aside from this, the accommodations offered are of first-class depending on the choice you make.

You will also note that Swiss people are amiable and will make you feel at home even though you are a foreigner or rather a tourist who is ready to explore.

All you have to do is to book a flight and make this your destination, and we promise you; you will thank us later after you see all that the country especially the city of Bern can offer.

These guides around things to do in Bern, for kids and adults, can be really useful.