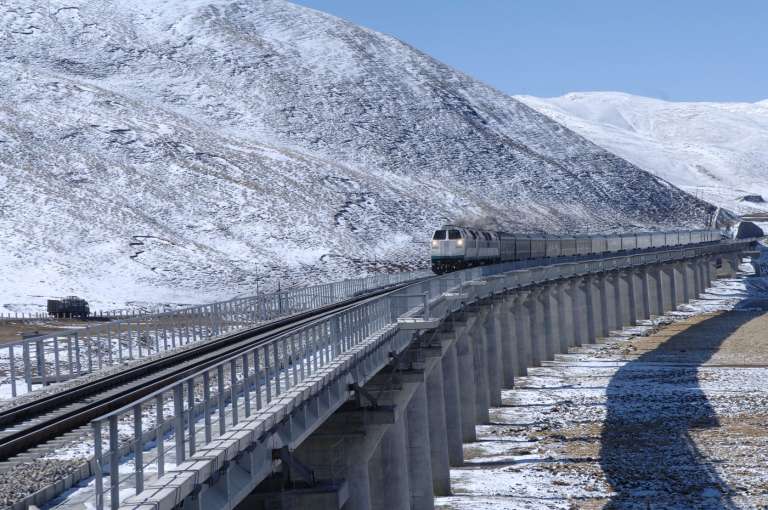 Taking Tibet train to the Tibetan plateau and the capital city of Lhasa is one of the most exciting journeys in the world.

A trip that takes from one to three days, the train journeys encompass almost the entire plateau from north to south and are an incredible experience.

Tibet train tickets can be bought from any of these seven cities, and the duration of the trip depends on the departure location.

With seven places from which to start the journey, you have a choice of destinations to arrive at for your flight to China, or you can take an internal flight or train to the departure city of your preference.

To get a ticket for the train to Tibet, you need to have three things: a Chinese Entry Visa (to get into China in the first place), your original passport, and a Tibet Travel Permit.

The Tibet Travel Permit is the primary permit required for tourists to travel into and around Tibet, and you cannot even board the train without it.

However, it is not as easy as just applying for the permit yourself and jumping on the train. Independent travel in Tibet is prohibited, and to get the license, you must be on a pre-booked tour with a registered tour operator.

Once your tour is booked, we can make the application for the permit on your behalf.

To make the application, you will need to send scanned copies (to the agency that handles such) of your passport and Chinese Entry Visa, which they can use in the application process.

Processing of the Tibet Travel Permit can take from 15 to 20 days, and it is advised to book your tour well in advance to have plenty of time to apply for the permit.

Once the Tibet Tourism Bureau has approved the permit in Lhasa, the Tibetan capital, it will be forwarded to the agency, and they will either send the permit to your hotel in China or forward an email copy of the license to your given email address.

For those traveling by train, a photocopy or scanned copy is sufficient to board the train, and then the original will be given to you on your arrival in Lhasa.

When you arrive at the departure station in China, your permit and passport will be checked at several points between your entry to the station and where you boarding the train.

Your luggage will also be checked carefully, so it is advisable to know what you are allowed to bring and avoid anything that is not permitted on the trains, such as lighters, matches, etc.

There are three classes of tickets for Tibet trains, and the cost of the ticket depends on the class.

The first-class option is the Soft Sleeper berth, which is the most expensive option.

The Soft Sleeper cabins are four-berth cabins with two levels of bunks, with the lower bunk being the more expensive option and the upper bunk being slightly cheaper.

The cabins all have lockable doors, local television, for those that understand Chinese, and plenty of storage space for luggage.

The Soft Sleeper is the most secure of all the options on the trains to Tibet and is the most popular choice with international tourists heading for Tibet.

However, you will be required to share the cabin with other travelers, unless you have a party of four that have requested to be in the same cabin and it is possible, or you have paid for all four berths in the cabin.

For those women traveling solo to Tibet, you can request to be placed in a cabin with only other women, and the train staff will do their best to consent to your request.

Sharing a cabin can be fun, as there are a lot of Chinese that use the train to travel to the plateau, and it is possible to make some lovely new friends on the journey.

The second-class option for the train tickets is the Hard Sleeper berth. While designated “hard” sleepers, the berths are as soft as those in the quiet sleeper cabins.

The main difference is that the hard sleeper cabins do not have a lockable door. The cabins contain six bunks over three levels and are open to the corridor of the train with just a small curtain for privacy.

While this can sometimes be a little cramped, it can also be an enjoyable trip, as most Chinese train passengers will sit on the bottom berths to talk and play cards during the daytime.

If you are not into making friends with your traveling companions, then it is best to take one of the upper bunks, so that you will not be disturbed.

Costs of the berths are also higher for the lower bunks and cheaper for the third level, and the bottom bunks are the largest, with the most headroom.

The top bunk has the least headroom and width, but it is the most peaceful if you like to travel in peace.

Hard sleepers are the cheaper option for international travelers and can help with saving money if you are traveling on a budget.

The third-class option is known as the Hard Seat, although it is not hard.

The seating carriages are much like the western train seats, with comfortable padded and cushioned seats in pairs on one side of the carriage and threes on the other.

Hard Seats are the cheapest option and are all of the same prices.

However, for those that are not used to traveling massive distances of thousands of kilometers in a seat, then it is not a recommended option.

Even though the seats are cushioned, after the first 24 hours of travel, they are likely to get a little uncomfortable and cramped, and you will want to get up and walk around often.

You may also have a problem sleeping if you are not used to this mode of travel over long distances.

While there are seven gateway cities to Tibet from mainland China, there are three routes that are usually used more often than the rest by international travelers.

The first, and one of the longest, is the route from Beijing to Lhasa, a route that takes around 40 hours to get to the Tibetan capital and covers a distance of 3,757 kilometers.

Trains from Beijing leave daily at around 8:00 pm and arrive in Lhasa at around lunchtime on the third day.

This is the third-longest train to Lhasa, behind Guangzhou at 55 hours and Shanghai at 46 hours, yet has always been one of the most popular routes.

Beijing was one of the first train stations to provide trains to Lhasa on the opening of the Qinghai Tibet Train Railway in 2006.

The second most popular route is a much shorter one, running from Chengdu in China’s southwestern Sichuan Province.

A journey that takes around 36 hours to complete the 3,070-kilometer train ride, it is a favorite route of western tourists to get to Lhasa.

Chengdu International Airport has a large number of flights from European locations, which makes it a major transport hub for foreign travel to China, and a popular place from which to depart for Tibet.

Trains to Tibet from Chengdu leave every other day instead of daily, and the schedule depends on the month of travel.

Trains from Chengdu are also a lot cheaper than from Beijing, and you have the opportunity of visiting some of the area’s most spectacular attractions, such as the Chengdu Giant Panda Breeding Center.

The train from Xining to Lhasa is the shortest of them all and a trendy place from which to enter Tibet for foreign tourists, especially in the summer months.

Xining, in China’s northwestern Qinghai Province, is the start of the famous Qinghai Tibet Railway, the railway line that most of the world said could not be built.

Running for almost two thousand kilometers across the Tibetan plateau, this track climbs up through high mountain passes, and tunnels dug into the permafrost of the icy Tibetan plateau ground.

Trains from Xining to Lhasa leave every other day, though the schedule is not as well defined as from Chengdu.

To know the exact day that the train leaves, it is best to contact the station itself or check with a travel agent.

A route that covers 1,972 kilometers to Lhasa, the journey takes around 22 hours, and leaves in the afternoon, which means that as you wake up on the morning of the second day, you are cresting the Tanggula Mountains, heading over the world’s highest railway pass, and finally entering the Tibet Autonomous Region.

When taking the train to Tibet, there are a few things to take into consideration in preparation for and during your journey.

The washing and toilet facilities are shared in each carriage, and carriages have dozens of passengers who will all want to use them.

It is best to get up early and get in first, to save having to wait and get to use them when they are still clean.

Toilets on the train are both western and Chinese squat type, so if you are not used to the local style of restrooms, then you do not have to worry.

Every train has a dining car, typically situated in the middle of the train, where you can get a selection of dishes from both Chinese and Tibetan cuisine.

Some trains are now starting to offer a few items of western cuisine, though these are rare and not often available.

If you are not used to the local foods, then it is a good idea to bring some pot snacks and packet foods with you, and hot water is freely available in every carriage for snacks and tea or coffee.

For those that do not want to head to the dining car, a snack and food trolley travels the length of the train at mealtimes, with box meals of Tibetan and Chinese dishes, as well as snacks, packet foods, pot noodles, and other snacks and drinks. Tea and coffee sachets are also available.

The train has an oxygen system that comes on after Golmud, on the route to Tibet, and pumps oxygen directly into the train.

For those that are suffering from altitude sickness, there are also oxygen tubes available from the Tibet train staff for personal use and connections in all the carriages and corridors to help alleviate the symptoms of altitude sickness.