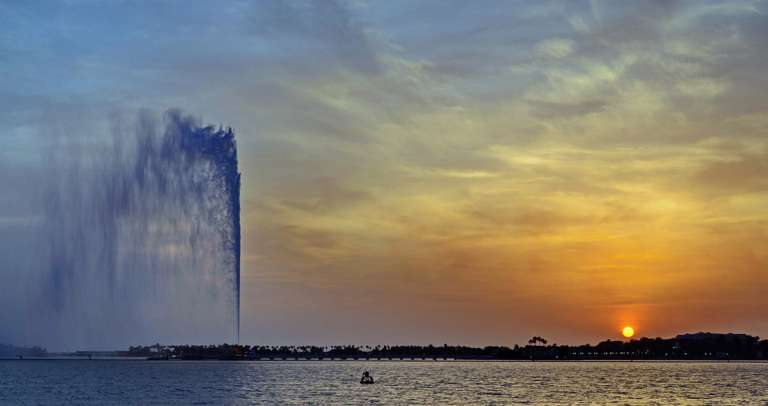 Are there exciting things to do in Jeddah, Saudi Arabia? Let’s have a look.

A tourist’s fantasy is on the bank of the magnificent red sea city, Jeddah. It will spellbind any tourist with its rich history, traditions, landmarks, and cuisine.

Any foreigner will have a very exquisite list of things to do on their hands if they want to sight-see the city.

For any food enthusiast¸, one of the things to do in Jeddah, Saudi Arabia, is to pay a visit to The Courtyard City. With several popular restaurants, it is the dream place for any foodie who will become a fan of the ‘beacon of the city’ instantly.

Built-in the early twentieth century, a proud example of Hejazi Architecture, ‘Bait Al Balad’ illustrates the history of Jeddah in the form of photographs and paintings. A local belief is that fishermen used coral from the Red Sea to make the esteemed building. The museum is located amongst several other historical coral buildings in the area of ‘Balad’ (a town in Arabic).

Al-Balad is a must to be on the list of things to do in Jeddah for travelers interested in history. Al-Balad is considered the heart of the city. A vibrant and frenetic fish market also opens in the early hours, offering more than 50 different fish species and promising an experience of its own.

Jeddah Corniche, nicknamed “bride of the red sea,” is located alongside the elegant sea and is considered a must for any tourist to visit. It is a 30 km coastal resort region of the city. Including the largest fountain on the earth, King Fahd’s Foundation, it also presents a host of attractions.

You will find many exciting spots, from recreation areas to famous restaurants. While on tour, a visitor experiences seeing a total of 26 bronze sculptures, which are beautifully designed.

The northern side has Fatima Al-Zahra Mosque, also known as the floating mosque, which gives an impression of floating on the sea at high tides.

The Red Sea Mall is located in the northern suburbs of Jeddah. It has famous fast food chain restaurants as well. The hotel affixed to it is called Elaf Jeddah.

It had the most prominent “indoor water fountain” and the largest glass-covered area in Saudi Arabia on its opening. Red Sea Mall is also a Guinness holder for the “biggest polystyrene ship model in the world.”

The only public aquarium in Saudi Arabia is the Fakieh aquarium, which offers visitors entertainment and education. The aquarium exhibits more than 200 marvelous species of fish, including sharks, groupies Napoleon Wrasse, Sea Horses, and many more from around the world. There are also sea lion, and dolphin shows daily.

For anyone fancying a long road trip from Jeddah, Taif is the place to go. A 3-hour drive past mecca, you will arrive at a much cooler home, high up on the mountain and in the company of wild baboons. Enjoy.

The Durrah Beach Resort is located in the tourist city, Durrat Al Arus, situated at the northern coastline of Jeddah.

The resort overlooks the red sea and has 175 well-furnished units, 39 suits, and 14 Bungalows and has all the fancy modern luxuries.

People coming over from the capital Riyadh via Riyadh to Jeddah flights can reach the resort in thirty minutes, as the Jeddah international airport is 30 kilometers away from the beach resort.

The park is deemed one of the best amusement parks in Saudi Arabia. It is a popular attraction with around one million visitors each year. Like any other popular amusement park, it also hosts several spectacular rides not found anywhere else in the country, such as double loop roller coasters and Slingshot.

It also hosts a “Ladies Night” on Wednesday. The various cuisine-based restaurants of that place are also worth mentioning, such as Lebanese and Chinese ones, the latter of which is right alongside an indoor canal.

The Red Sea provides a better room for boat trips and diving, which are genuinely exciting activities worthy enough to be on the To Do list in Jeddah, Saudi Arabia.

The magnificent Red Sea has several dive sites, 1 hour and 30 minutes off the Jeddah coast, providing 30 meters in depth to explore the sea. The turquoise sea has wrecks and reef dives.

Some local companies host scuba diving and a trip for natives and people from all over the world. These companies also run the courses over several weeks to allow flexibility in their schedules.

You can get from the capital on one of the Riyadh to Jeddah flights and rent the apartment, which is available with all dive shops.

By the way, did you know that the world’s tallest tower is under construction in Jeddah? Check this out.

Jeddah is such a fantastic place to explore! Try these lovely ideas for the things to do in Jeddah, and have a great time.

By the way, do explore what you can do in Cairo, Egypt. Also, read about the Top 10 Things To Do In Temecula, USA.