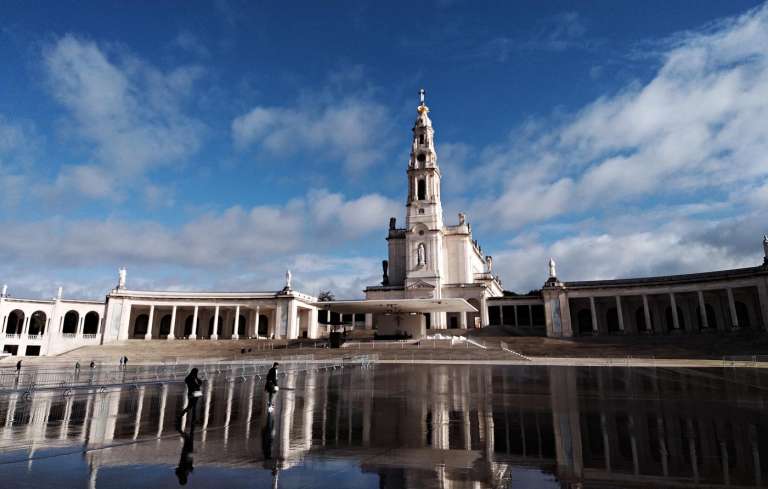 Trust us, you have to visit this place even if you are not a religious person, as it is impressive, massive with a fantastic combination of modern and traditional architectural elements.

Oh, did we mention that it is massive? Well it is.

The Miracle of the Lady of Fatima & the 1917 story

Three children (shepherds) in Fatima village, said they met Virgin Mary on their way back home. Their names were: Lucia, Jacinta and Francisco. Lucia spoke to her and Virgin Mary revealed that she would appear again after 6 months.

People learned this story and the interest was rising as time approached. On 13th of October 1917, around 70.000 people attended the site expecting a great miracle.

The story says that the figure appeared again saying that she was the Lady of the Rosary. She raised her hands to the sky and a series of sun and light related things happened. People who were present experienced things like the sun was coming closer to earth, brilliant colors spinning out of the sun in a psychedelic, pinwheel pattern and more.

At the same time, others said they show nothing at all.

What really happened that day? Nobody knows. Scientists claim that a “sundog” event took place, which is something like patches of light that appear beside the sun. You can read more about sundogs here.

Who really knows? None does but this was conceived as a divine work and things rolled out accordingly.

The specific event was recorded to history as “The Miracle of the Sun” of Fatima.

The Sanctuary of Fátima, Portugal

This is the 4th biggest Catholic pilgrimage site in the world. There are different areas to visit in the Sanctuary.

Chapel of the Apparitions: This small chapel was built in 1919 at the exact spot where the oak tree was, where Fatima appeared. The tree is no longer there as after the apparitions, pilgrims cut its branches to keep a part of this “relic”.

You can see the Chapel at the beginning of this video.

In the centre of the chapel is the original statue of the Virgin Mary (1920).

Basilica of our Lady of the Rosary Fatima: The Basilica was built between 1928 and 1953 in a neo-baroque style. The tombs of Lucia, Jacinta and Francisco are in the Basilica.

Basilica of the Holy Trinity: This Basilica has a 8633 seating capacity, thus making it the fourth biggest catholic church in the world.

The outer yard (processions area): A really big space in the shape of a curved circle where thousands of people gather during festivities.

While you are in the area you can visit a couple more places near the sanctuary.

Gruta da Moeda (The coin cave): In 5km away from the sanctuary. It was discovered in 1971 by two hunters.

No worries for coming up. No need to climb all the stairs again. An elevator is in place to take you up. More information here.

How to Get to Fatima Portugal

You can get to Fatima via your own car, bus, train or through a guided tour.

Lisbon to Fatima: A 1.5 hours drive from either Porto or Lisbon. You just take the highway and there are signs to get you there. No way you can get lost.

Porto to Fatima: Same logic as from Lisbon, but leaving from Porto.

Chances are you are staying to one of these cities, due to their airports.

Bus to Fatima: From either Porto or Lisbon you can get a bus there. This site is useful.

Train to Fatima: Not recommended as the station (Chão de Maçãs) is 20km away from the sanctuary. You need to take a taxi to the sanctuary (€25-30) or a regional bus. Check this site for European Rail Travel.

Where to eat in Fatima, Portugal

Popular restaurants for lunch and dinner are:

In case you want to sleep near Fatima and not staying in Porto or Lisbon or any other place, do consider these options:

Meio Country House: Average price: 220 euro p.p/night for the whole House or around 50 for 1 room with private bathroom.

Well, that is all to know to get from Lisbon to Fatima sanctuary and have a remarkable time. As said, even if you are not “into” religion you can visit and admire this place for its architectural beauty.

Make sure to check our post for Sintra, Cascais, and all the other locations in Portugal including Lisbon.

Have fun in Portugal.