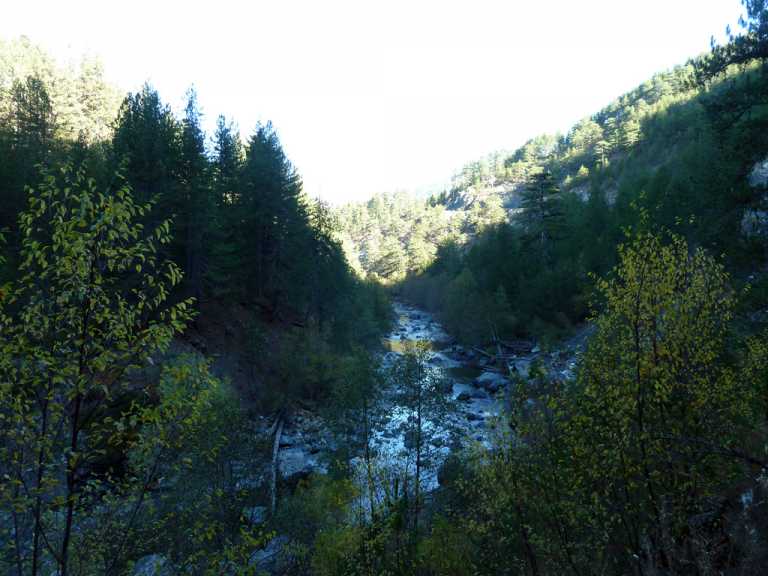 Vovousa is one of the most picturesque and traditional villages of East Zagori.

It’s located near the National Park of Valia Calda, in North Pindos. River Aoos passes through the village (it’s said that the village was named Vovousa from the noise of the river’s waters).

The inhabitants are mostly Vlachs, and there are few families of Sarakatsanoi. Today Vovousa has few inhabitants living from logging and tourism. In the middle of the village, there is the single-arched stone bridge of Misios built in 1748.

This arch connects the two shores of the Aoos river and the neighborhoods of the village.

There is the chapel of St. Paraskevi at a short distance, where a three-day traditional festivity takes place every year on the 26th of July.

The visit to the village is a truly unique experience for the mountain friends, the hikers, and the lovers of mountain sports.

It’s an ideal starting place for many activities such as mountain bike, climbing, canoe-kayak, rafting, and hiking.

The National Park of Valia Calda was established in 1966. In the local Vlachs dialect, Valia Calda means “Warm Valley.”

The core of the National Park of North Pindos area is included in the NATURA network, European farm protection of biodiversity, and unique bird protection areas.

It is characterized by dense forests of black pine and beech, but there are also clumps of robolo (bushes) in the park’s lower and middle altitude.

The park provides shelter for more than 80 species, including ten rare bird species such as the Eastern imperial eagle, the Golden eagle, woodpeckers, and the Lanner falcon.

The area is also an essential habitat for reptiles and insects. In Arkoudorema and Aoos river lives and reproduces populations of trout (Salmo trutta).

The hiking starts from the core of the National park following the International walking route E6.

You cross the National Park, along the river Arkoudorema till you reach its incredible waterfall.

During the summertime, you can dive into the clear waterfall. Three times the hiking route crosses the Arkoudorema.

You continue the route through the dense vegetation of pines, beech, and ferns.

Just before the end of the route, you cross the river Aoos. Valia Calda is an amazing, vibrant landscape of unparalleled beauty and an important ecosystem. The hiking time lasts approximately 6 hours.

The hike starts from the core of the National park of Valia Calda, following the European walking route E6.

You cross the National Park, along the river Arkoudorema till you reach a point where there is a sign for lakes Flega.

You follow this route, and at an altitude of 1940m and 1960m, you find two small lakes in the Flega mountain.

The lakes host rare amphibians such as toads (Bombina variegate, Rana graeca) and newts (Triturus alpestris). You continue hiking to the Flega peak at 2159 m.

From there you can exploit the unique view and admire the beautiful area. The hiking time is about 6-7 hours.

The hiking starts from the Vovousa village to the peak of Avgo at 2.177 meters.

You reach the peak through beech and black pine forests, continuing as the altitude rises at alpine terrain.

The view from the peak to the gorge of Arkoudorema and the mountain Ligkos and North Pindus is breathtaking. The hiking time is 5-6 hours.

The route starts from the village Vovousa following for 1500 meters the dirt road to the village “Perivoli.”

You turn left to the forest road for 2500 m. Following the International walking route, E6 descends to the stream “Waterfall.”

After the stream, you meet the forest road which passes from ” Paliomonastiro ” and ends up at the dead end.

Lake of the springs of Aoos River in Vovousa

The walking route P5 starts from the Aoos river meets the Arkoudorema stream on the west part of the National Park.

After a 12 km hiking route, you end up at the lake of the springs of Aoos river. The route takes approximately 4 hours.

The route starts from Milia village and follows the International walking route E6 up to the narrow passage “Salatoura,” where the southeastern entrance of the National Park is.

You continue southwestern to the Mavrovounio following the sign P7 until you meet the path P1.

You continue up to the Flega peak (2159m), and from there, following path E6, you cross Arkoudorema and reach Vovousa.

Vovousa is a place to experience many different things that comfort the eye and soul.