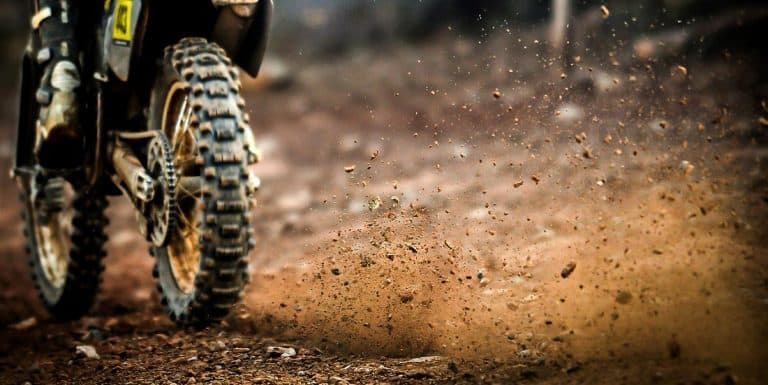 Let’s admit, we all love to watch professional riders steal the show on our screens with their killer skills and super cool dirt bikes. Do you know how to ride a dirt bike? If not, then read along.

Watching them do all the cool stuff, some of us may also get the urge to get on a bike and have the time of our lives.

But is it that easy?

Well, riding such a bike is different from riding a regular bike. Plus, the motocross track; everyone knows, it can be one heck of a ride for anyone new to MX.

Fortunately, the process can be made easier and more fun. And in this post, we are going to do that for you.

Here you will come across the five best tips on riding a dirt bike, along with answers to four of the most popular questions that people have regarding bike riding.

So, buckle up, and let’s get started.

Get Used To The Clutch

If you have zero experience with changing gears using a clutch, the start can be a little rough.

Even though the process isn’t that complicated, it can be hard to comprehend while starting for the first time.

Well, you start the bike (ignite the engine), pull the clutch lever, press down or pull up the first gear, and as you accelerate slowly, begin releasing the clutch inch-by-inch, or even centimeter-by-centimeter.

This will get your bike moving forward, and once you have acquired balance, you can place your feet up.

Also, as you speed up, you’ll need to shift up the gear while holding the clutch and again accelerate and release the clutch.

The same holds for all gear shifts, whether up or down.

What are the Differences Between a Regular Bike and a Dirt Bike?

When you wonder how to ride a dirt bike, these points surface too. Whether it’s a regular bike or a dirt one, it has two wheels, one engine, and similar mechanics in most cases. So, what’s the difference?

For example, on a regular bike, you may not have to be too cautious while giving the initial acceleration pumps; however, on a dirt bike, you may pop a wheelie if you accelerate too much.

Also, such bikes are lighter in weight. This may make it difficult for you to balance them correctly. At the same time, the light weight will help you perform stunts more efficiently. So, it’s a lot about personal experience and skill level.

Apart from this, it’s important to note that you should always squeeze the bike with your knees for better control. We’ll talk in more detail about this in a later section.

Wear Riding Gear and Be Safe

Riding a two-wheeler is always a risky affair. And you are planning to ride a dirt bike, which is even more challenging to get the hang of.

To keep yourself from getting hurt, make sure that you always wear the proper safety gear while riding your bike, even if it’s at a low speed or for a short distance.

Even the mildest falls can give you several scratches and severe injuries.

So, keep yourself safe from such problems. Buy a motocross helmet, a motocross riding jacket, gloves, and riding boots as well.

Also, get your gear only from a qualified brand like Alpinestars. Cheaping out on the essentials will always make you regret it.

When you get your bike, you may feel like going out for a fun riding day, practicing professional stuff like mountain climbing.

Honestly, it’s good to have aspirations. However, before you step out for a mountain climbing session, you must have acquired enough experience on a flat dirt road with small to medium-sized obstacles.

The best place to start will be a dirty road, track, or a dirt park near you.

Here, you will practice your control as a beginner, eventually becoming a better rider after every session.

Dirt bikes are too light to be taken lightly.

These are powerful machines that need to be handled carefully. So, keep the following tips in mind.

Most Popular FAQs On How to Ride a Dirt Bike

How Do You Shift a Dirt Bike?

This is the first most crucial question that any aspiring rider would have.
As mentioned, riding a bike is way different than driving a car or riding a regular bike. The clutch is more powerful and can deliver an enormous amount of power.
So, start slow. When the engine is switched on, sit on the bike, hold the clutch, shift up to the first gear and accelerate slowly, eventually releasing the clutch.
This will bring your bike to motion. To change gear while riding, hold the clutch again, shift up the gear to speed up (shift down to slow down), and accelerate gently while slowly releasing the clutch.
One needs to be very patient while starting to ride a dirt bike. Once you get used to the way this technology works, you’ll be able to do more with confidence.

Getting a 450 CC bike may not be the best idea if you are starting to ride a bike.
The reason is that these bikes are too powerful to be controlled by an inexperienced rider. Also, not being able to control and ride your first bike can put you low on confidence, making you dislike the concept of such bikes.
So, start on a smaller bike. Many adult professional riders who have been in the sport for years still use a 250 CC bike. There’s no reason to start with a 450 specifically.

It’s not precisely hard to ride it. However, every beginner must start with baby steps.
Shifting gears on a bike and then releasing the clutch coordinating with the acceleration system can be confusing for bike riders.
So, it’s better to start slow and perfect your control before speeding up or climbing up a mountain.

Where Can You Ride Bikes for Dirt?

Well, if you have a piece of private land, you are in luck. That’s one of the very few places where you wouldn’t have to pay a riding fee.
Apart from that, you can ride your dirt bike in forest trails, desert trails, mountain roads, dunes, hare scramble, and off-road tracks, and in dusted rural areas as well.
This doesn’t mean that you can’t ride a dirt bike on roads. It’s just not the best place for doing so.

You may aspire to be a great dirt bike rider, but that aim can’t be fulfilled without keeping the basics in mind.

Hopefully, this was helpful.