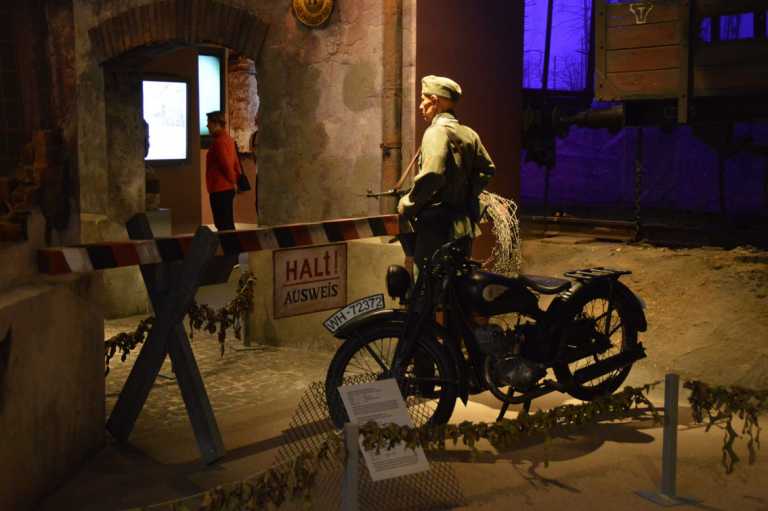 Minsk is the Capital of Belarus. Belarus is a country hugely tormented during World War II. Huge fights took place there and war memories are strongly weaved with the history of their capital and country in general.

Minsk was largely destroyed back then and was rebuild almost from scratch. You know… WW II is only 70 years ago. It is not “ancient” history, but quite close.

There are memorials related to war and suffering all over Minsk. One of them is the War Museum located in Minsk. We visited the museum during wintertime and the overall snow-covered city of Minsk added a dramatic tone to our visit.

This picture was taken from afar.  At the museum exterior this concept of a sculpture and a monument is so huge that you need to be far to take a picture of it.

The government of Minsk has done an amazing work with this museum. Scroll down to see how they depicted the life of Belorussian partisans.

Here is a “collection” of explosive mechanisms, placed at train rails.

There are lots of memorabilia with awards and decorations of heroes of that war.

One of its main characteristics was that they don’t just present relics and memorabilia related to World War II but they actually used authentic props to rebuild entire scenes.

In that way the visitor can really experience (walking through) how partisans acted and the cruelty of that period of time, that shed the blood of millions.

Below: Partisans propaganda and news office.

Below, is a guns repair and maintenance shed.

When someone goes deeper into the history of this country they realize that these people had to fight against many hostile factors during their existence.

Below, an authentic train wagon, with which Belorussians were transferred to concentration camps.

Perhaps that is why they needed to depict how people lived during World War time. The whole feeling can transfer you back to those freezing cold times, where people were trying to free their country from Nazi invasion.

The museum walk ends up into a monument located at the top where one can see actual numbers of killed, plus the locations were battles took place.

It is really impressive as it is a very tall hall.

Our feelings at the end produced a mix of thoughts for the bravery of people of Belarus, along with that huge sacrifice.

Perhaps this is the reason such museums must exist as we had the same feeling when we visited Dachau in Munich.

One of the top things to do in Belarus is to pay a visit to Nesvizh Palace (Несвижский замок). It is the most beautiful palace of Belarus, according to people of Belarus. These days it acts as a hotel and a walk-through museum.

Nesvizh Palace has very interesting architecture and really attractive gardens. So, it is no coincidence that it is the most popular attraction for tourists.

Nesvizh Palace construction began in 1584. However, since that day it was rebuilt numerous times. As a result one can notice the influence of a variety of architectural styles like: Renaissance, Baroque, Rococo, Classicism, Neo-gothic, Modernism, and more.

The castle is located around 120km from Minsk and it is considered to have the largest landscape gardens in Europe.

In and out Nesvizh Palace in Belarus

We stayed in Nesvizh castle for 1 night and we had a tour in its different facilities. Here are the photos from our experience.

This is the exterior and the surrounding area of the Palace.

Inner yard. Quite big and imposing.

Stuffed animals and many deer horns in the surrounding walls.

A very detailed and beautiful tapestry.

All these renovation works have managed to sustain the “essence” and feeling of that old aristocracy that lived here, through all these years.

Belarus is a country with many surprises. It has suffered a lot with wars and had gone through major destruction. But in such place you find out something different.

Same, as in Minsk, wherein the Old city you will find buildings of both “strict” style and with elegant decorations. We will write about our walk-through’s in Minsk in upcoming articles.

When in Belarus, do visit the Nesvizh Palace. Lots of local travel agencies organize daily tours/excursions there.