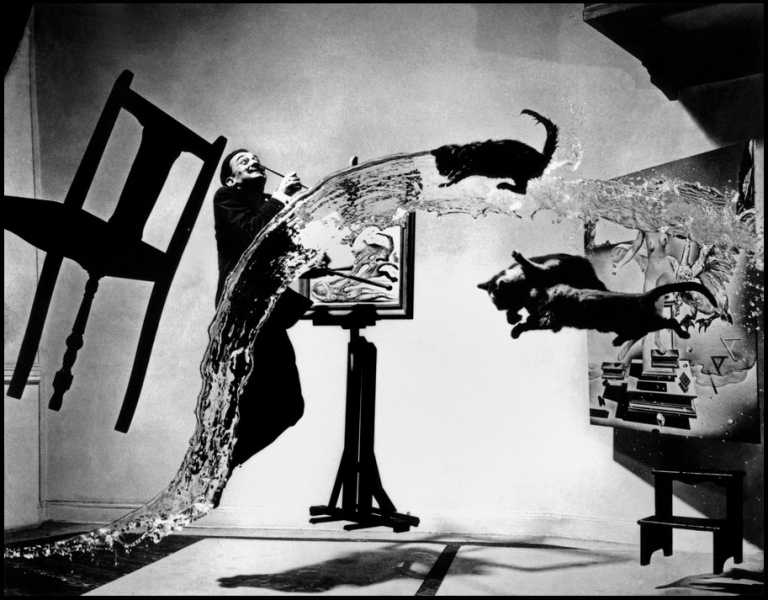 You have seen all these great photos were one or more persons are captured in mid-air, jumping with a smile. Welcome to Jumpology photography. Here you will learn a few things on how this trend came into our life.

Philippe Halsman was the first one who told people to jump when he wanted to take a shot. This came to him as an idea during the 50’s, for those who didn’t feel comfortable in front of camera lens. So, it was a way to make them relax.

The “jump” concept actually worked and he kept it as a method for more than 6 years. Halsman published 197 of these playful portraits in his Philippe Halsman’s Jump Book.

This book of Philippe Halsman included jumps from famous and less famous persons. A few, around 2%, denied to jump. According to Halsman they didn’t due to their low self esteem. The rest did the jump in front of Halsman’s camera. Some of them where future Presidents of USA, powerful businessmen, senior magistrates, great scientists, famous actors and artists.

The Jump Book, included a small proof with Philipe Halsman’s opinion, regarding this photoshooting method which he named as Jumpology. Halsman, with his excellent humor, advised us that we need to use the science of Jumpology, so to be able to take photos of our models in a more relaxed manner. In that way results would be better.

This is valuable advice and information, especially in our days where jumping is quite a trendy thing in fashion & wedding photography as well as in photos posted in social media. For that reason I quote some highlights from his own words.

There are two kinds of jumps

Halsman says tha there are two kinds of jumpers (his way of categorizing humanity from the jumpology point of view). The first kind wants to jump as high as they can, while the second kind is not so much interested on how high they can. The first kind of jumpers are ambitious and are interested in making an impression to others, while those of the second kind either don’t take jumping so seriously or they lack in ambition and motives.

Aids in jumping can be really fun

As Halsman describes in his small proof, to use aids in jumping can be a really fun thing. While most (of his models) simply did the jump, some asked for an aid. William Holden asked for a cane. Maurice Evans asked for a jumping rope. Salvador Dali went far enough asking to jump with his brushes and pallet, while an easel and a painting were airborne, plus three cats, a chair and bucket of water were shown to also jump into the frame. Halsman being an excellent host, used to jump along with beautiful girls like Marilyn Monroe and Grace Kelly, to show how to do it!

Halsman understood that when Learned Hand, an 87 years old supreme magistrate (after conquering his initial uncertainty on if he would survive the jump), finally jumped. He also saw that with the Patriarch of photography Edward Jean Steichen. Whenever Halsman saw their photos, he felt less of the weight of his age. This made him realize that the perception on how young you feel is more important of how old are you.

Don’t take too seriously a denial about jumping

You may suggest the jump, but some may refuse. Despite the fact that that will be a small number of people, don’t receive that denial as a rejection. The Jumpology theory is here to help. The person who denies to jump, does that because he/she is afraid they might lose their dignity, even so nobody who had any dignity never lost that to a jump.

Always make room for a jump

The last and most important advice of Halsman is to always have plenty of room for a jump, without hitting their heads on the ceiling.

This article is a translation of a Greek one from Dimitris Asithianakis. Dimitris is a professional photographer and a teacher of photography as well, based in Athens, Greece.