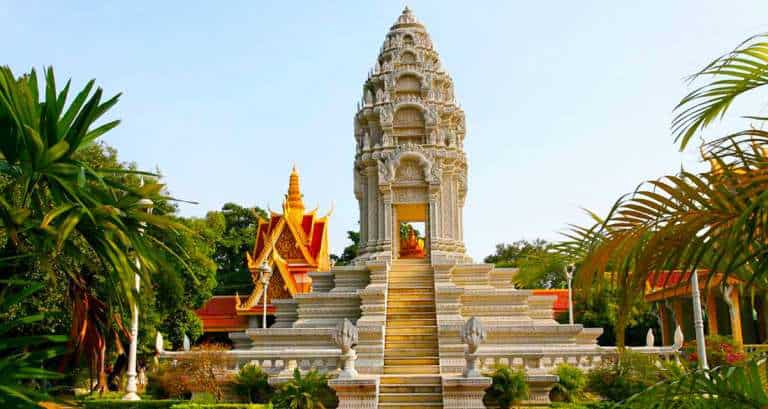 Two of the most spectacular places in Indochina, Vietnam, and Cambodia are both stunning places to visit, with a wealth of history to explore and cultures that are both intriguing and exciting to discover.

Both Cambodia and Vietnam have only been major touristy destinations for a short time, yet have fast become the places to be when planning Vietnam and Cambodia tours.

From the early days of the Khmer Empire to the French colonialism and their own individual devastations of war, these two ancient nations have survived everything that has been thrown at them and come out shining at the end.

With burgeoning tourism industries, Cambodia and Vietnam are must-visit destinations in Asia that will leave you longing to return to explore some more.

It is virtually impossible to explore the whole of both nations in one visit, but knowing which places to choose to go to can be a struggle, with so many amazing destinations across the region.

However, some really stand out as iconic examples of the nation in which they are located, and a visit to these main sites will give you an awesome insight into the histories and cultures of the people.

These are some of the best places to visit in Cambodia and Vietnam.

Best Places to Visit in Vietnam

The capital of Vietnam, Hanoi is the country’s second largest city, with Saigon being the largest. One of the most important cities in Indochina for more than 800 years, it was the political center of Vietnam until the arrival of the French, when it was eclipsed by Hue.

However, while Hue may have been the imperial capital during the Nguyen Dynasty, Hanoi still had a major importance in the French colonial period, and a large administrative city was built to the south of Old Hanoi.

Often referred to as the “Paris of the East”, Hanoi has two large French Quarters, with large tree-lined boulevards, dozens of small man-made lakes, and a wealth of French Colonial buildings.

Sandwiched between them lies the Old Quarter of Hanoi, and between the three they make up the main tourist area of the city.

From the stunning beauty of the Presidential Palace to the One Pillar Pagoda and the unique Ho Chi Minh Memorial, Hanoi has more to offer than you could manage to see in a week.

Just to the southeast of Hanoi lies the stunning Halong Bay, an area of outstanding natural beauty that has become a UNESCO World Heritage Site and the most popular tourist destination in Vietnam.

Featuring thousands of small islets and karst formations, the bay is one of the most diverse biosystems in Asia, with a selection of tropical evergreen biosystems alongside oceanic and seashore biosystems that are home to hundreds of thousands of species of flora and fauna.

Boating on the bay is the best way to see the island ds and karst formations, and day trips or two-day cruises around the bay are a popular excursion.

Travelers on the boats get to view the islands and rock outcroppings that cannot be seen from shore, as well as landing on several of the larger islands that are inhabited.

You can also take a small boat, with a guide, through some of the unique cave systems that these islands are famous for, or visit the floating villages, which only ever come to land once a year, in the typhoon season, the rest of the time, they are found floating out in the bay, the people making their living from fishing and the sea.

Often known locally as “Faifoo”, the original name for the city, Hoi An is one of the oldest cities in Vietnam.

The old town district was a historic trading port from the 15th to the 19th centuries and is an exceptionally well-preserved example of the unique blend of foreign and local architecture that is still found all across Vietnam.

One of the most prominent features of the city is the covered Japanese Bridge, which was built in the 16th century to connect the communities of the Japanese and Chinese traders that lived in the city.

The bridge connected the divided settlement and is the only bridge of its kind in Indochina, including having a Buddhist temple attached to one end.

As a longtime trading port in Asia, the town has a wealth of museums that feature all of the history of the region, as well as the culture, folklore, art, and trade.

A coastal city that is the capital of Khanh Hoa Province, Nha Trang is well known for having some of the best scuba diving in Asia, and is often considered to have some of the most beautiful beached in the world.

Beach holidays and scuba diving have brought this small city to international status as one of the most popular destinations in Vietnam for foreign tourists.

Back from the beaches, in the city itself, lie a huge number of attractions that would take half a lifetime to explore, from the Long Son Pagoda and the Palace of Emperor Bao Dai to the Yangbay Waterfall, the Champa Tower of Thap Ba Po Nagar, and the Hon Ba Mountain.

There are also several dozen islands off the coast, which all have delightful names, such as “Silkworm Island”, “Swiftlet Island”, and “Bamboo Sparrow Island”.

The largest island in Vietnam, off the southwestern coast, Phu Quoc is located in the Gulf of Thailand, and includes 21 additional small islets.

Mainly a fishing community, the island has seen a huge influx of tourism in recent years, and is the only place in Vietnam that foreign tourists can visit without a visa for periods of up to 30 days.

The island is said to have some of the world’s best beaches, which are still unspoilt by tourists and remain in their natural state.

Very few resorts still exist on the island, though it has been slated for further development in the near future.

Famous in Vietnam as the main source of black pepper and fish sauce, there are rich fishing grounds on the coast for the mush-needed anchovies to make the fish sauce.

Most of the island is mountainous, with dense forests and during the Vietnam War, it served as a detention camp for Viet Cong prisoners.

Unusually for such a small island, Phu Quoc has its own international airport, with flights coming in daily from Singapore, Bangkok, Guangzhou, and Shanghai, as well as flights from as far away as Moscow, London, Copenhagen, Stockholm, and Milan.

From a sleepy backwater island, Phu Quoc has morphed into a must-visit destination for expats from the west and sun-seekers.

Best Places to Visit in Cambodia

Formerly known as Kompong Som, Sihanoukville is the most popular beach area in Cambodia, with the most stunning beaches along the country’s short coastal area. Until 50 years ago, the beach town did not exist as a town, but was just a collection of small fishing settlements along the coast.

In the mid-Sixties, a joint French and Cambodian company began work carving out a purpose made resort that soon attracted the jet-setters and elite of Cambodian dignitaries, and was renamed Sihanoukville after the former ruling prince of the country.

Used as target practice for the Khmer Rouge in the 1970s, the resorts were completely destroyed, as was the road to the town.

It was not until the early 1990s that the town became accessible once again. Now, after more than 30 years of housing nothing but ghosts, Sihanoukville has once again become the place to visit for beaches in Cambodia.

Strangely, the town itself has become a haven for casinos and tacky commercial centers, but it is the beaches that are the main attraction.

The stunning Otres Beach, which stretches along the northern section of the beachheads here, is known for its peace and tranquility, set apart from the busy nightlife and bustle of the city, it is a haven for backpackers, with much cheaper guesthouse accommodation than in the main town area.

To the south of Otres Beach lies Serendipity Beach, the party beach for the youngsters that travel to Sihanoukville for the nightlife and relaxing beaches.

The daytime sees lots of people walking and sleeping on the beach, enjoying the sun, while the nights are all about the clubs and nightlife of the town, and the raving beach parties that last until dawn.

The stunning capital of Cambodia, even the name suggests the exotic delights to be had in this ancient and modern city.

From the glittering spires of the Royal Palace to the saffron robes of the monks  that wander the streets at dawn looking for alms, Phnom Penh has become one of the must-see cities of Asia, and a gem in the crown of Cambodia.

While this busy city can be a major assault on the senses, with massive traffic and speeding motorbikes on small side roads, as well as delightful smells coming from the street-food vendors and the shouts and calls of the market vendors, exploring the city on foot is one of the delights of its charm.

Phnom Penh may be a bustling commercial center, but with its bustling bars, French colonial café culture, and world-class cuisine, it has risen from the ashes of civil war to once again be renamed the “Pearl of the Orient”.

No visit to Indochina would be complete without a trip to Angkor, the ancient temple complex of the Khmer Empire.

Constructed more than a thousand years ago as the capital of the Khmer people, it was the center of an immense empire that encompassed the whole of Cambodia and most of Laos, as well as major areas of Thailand and Vietnam.

From the 9th to the 15th centuries, the Khmer capital flourished, and the magnificent temples were constructed in a variety of designs, with influences from India, China, and Siam.

Now, most of the temples are in ruins, and the entire complex is known as the Angkor Archaeological Site. However, more than 2,000 temples remain in the area, and more than 100 are still in good condition, while others are undergoing restoration.

The ruins of Angkor lie amidst the dense forests and remote farmland in the north of Cambodia, and the closest city is that of Siem Reap, which is known as the “Gateway to Angkor.”

Said to be the world’s largest single religious site, the temple complex is worth spending at least a few days exploring, and there is always something new to see around every corner.

The most famous of all the temples is Angkor Wat, the main temple at the site.

Still in use today, it is one of the most stunning examples of Khmer architecture in Indochina and is a popular place for foreign tourists to visit.

The most popular time is at sunrise and sunset when people regularly flock to the temple to get a photo of the burning orange sun reflecting on the temple roofs and dropping below or rising above the immense scene of temple spires poking up out of the dense forests.

Are you new to hiking? Then read our Hiking for Beginners post.

Explore more of Asia locations to travel from our Asia section.