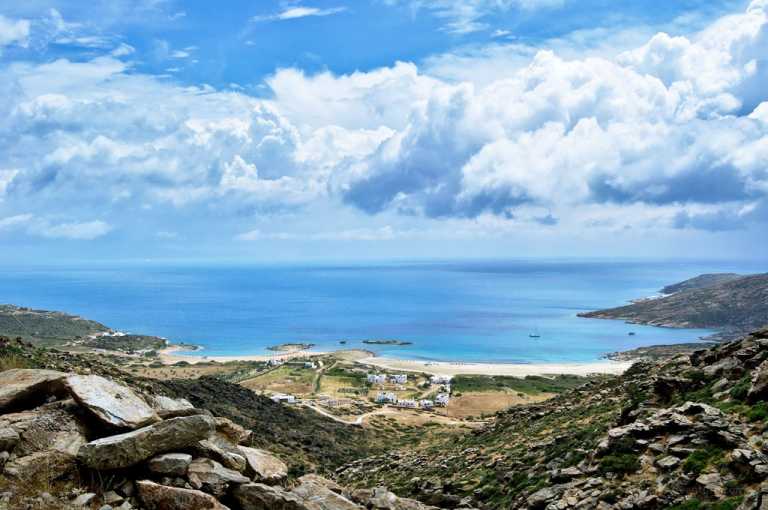 Ios Greece is an iconic island in the southern part of the country. It is home to pristine beaches, beautiful crystal-blue waters, a mythological history, and dramatic crags. And not forgetting classic, cubist, whitewashed buildings and various activities and sights to do and see between its shores.

Let’s look at some of the best things to do in Ios, Greece.

Oh…! The fantastic beaches of Ios. There are around 20 of them.

Mylopotas Beach is a great place to enjoy crystalline waters and the white sand of the Aegean. It is located right near the town of Chora. Activities on the beach include boat riding on a speed boat or exploring underwater life by snorkeling. A fantastic beach club, the number one spot to party in Ios, is found on this beach.

These are some of the many activities you can do for hours on the beach.

Hora of Ios & the island

“Blasted”? We were too! See this video of some guys paragliding over Ios. Wow…, right?

Above Plakotos beach, you can explore an ancient tomb, Homer’s tomb, which many people have come to refer to as the burial site of the famous poet Homer.

This is the path leading there.

Here is what you see along the path.

One thing you must not miss to do in Ios Greece is hiking the Ios’ backcountry, more so if traversing the shepherd paths through the rocky terrain up to Pyrgos, the island’s highest point.

You can hike to the old monastery of Agios Ioannis. Hiking is also a way to feel and understand the Islands’ ancient mythology and history while reminiscing what the long-gone inhabitants must have encountered when exploring their native land. It would be best to carry a map, plenty of water, and sun protection when embarking on this hiking mission.

The Panayia Gremiotissa church and the Evangelismos Cathedral are two architecturally gorgeous churches in Chora.

Panayia Gremiotissa church is near the summit of one of the town’s many hills.

The Evangelisimos Cathedral is located in the town center.

Evangelisimos is an excellent site for taking iconic photographs, thanks to its blue and white roofs. The picturesque white bell tower of Panayia Gremiotissa is one of the most captured images on the Island. Various festivals occur in both churches throughout the year, so check the calendar for a celebration of your choice before you travel.

You can visit Skarkos Hill, Ios Island’s most important Bronze Age archeological excavation site. The site is essential to see if you want to learn about the history of Ios Island.

You will learn about the structure of the settlement or discover the ancient burial customs employed. By visiting Skarkos, you get in touch with the history of Greece and have a feel of the old lifestyles of its people. Seeing Skarkos is home to sites that interest both the avid explorer and those traveling more relaxedly.

Odysseas Elytis Theater, a large, open-air amphitheater, is named after a famous Greek poet. Recently built, it is styled much like after ancient Greek theaters. It is a fantastic place to participate in the many cultural and festival events, performances, and musical concerts on Ios Island.

Ios is another Greek island that, through the last decades, has been a destination for rock fans and luxury travelers since it has a “couleur locale” that endorses every taste.

Did you like our article about things to do in Ios Greece? Also, read 26 Things To Consider In Dating Greek Men.