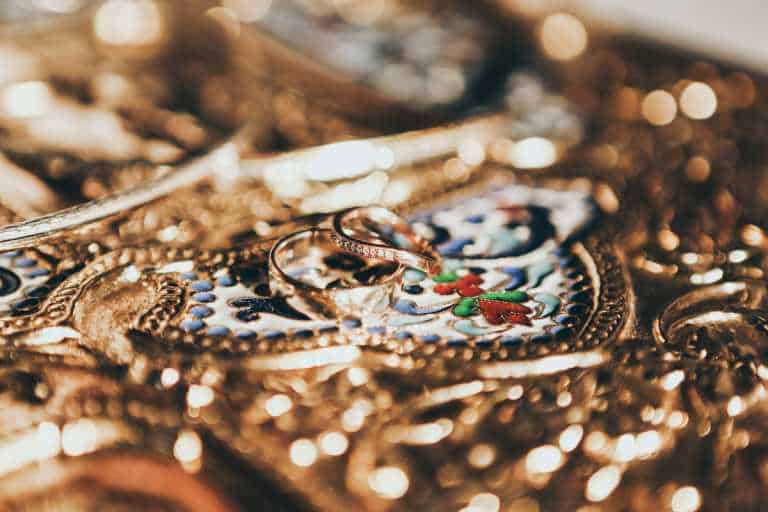 Have you ever been to Greek weddings? Our neighbors invited us to celebrate their first wedding anniversary, a wedding that included several Greek traditions.

One of the best ways to see how a traditional Greek wedding goes is to watch “My Big Fat Greek Wedding” movie. It exaggerates a bit in some points, but that is the spirit when tradition is followed.

As I knew tradition was essential to them, I looked to buy them a traditional gift to take to the party. This website has dozens of ideas and inspired me to gift them the coffee-table book about Greece that matched the traditional anniversary gift of paper.

Here I’ve written about some of the symbolism in Greek wedding ceremonies. It is not all about plate smashing!

So, how do Greeks organize their Greek weddings? You do want to read the post about what to know for dating Greek men and this one for Greek mothers.

If you plan a wedding in Santorini, read this guide for Santorini weddings.

Greeks are easy-going but do read this post about why not piss off a Greek.

January and June are considered good months for marriage due to links back to the ancient Greeks. January was the month dedicated to Hera, the wife of Zeus and the goddess of marriage and fertility.

The Romans later translated Hera to Juno and dedicated the month of June to her.

July is usually the latest, and September is the newest trend. August is generally avoided, as many are on vacation.

Before the Wedding Ceremony

There’s a ritual of making up the marital bed the day before the wedding that some families still do today.

In the couple’s marital bed are thrown money, sweets, rice, and almond, each symbolic of their commitment to each other.

In some traditions, they tend to throw or pin money to their clothes. Family members and close friends usually do that.

Another tradition “dictates” to put money in the bride’s shoe. It is common in Greek culture to aid the new couple with as many things as possible to start their new life well.

As a blessing of fertility, a baby is then rolled on the bed, and it is said that the couple’s first child will be the same gender as the baby who rolled the blessing.

The best man or “koumbaro” helps the groom prepare for the wedding, and the “koumbara,” or maid of honor, helps the bride to dress and be prepared for her big day.

Both take place at a small bridal altar on which there’s a tray holding the wedding crowns, the betrothal rings,  a couple of candles, wine, and a bible.

The rings are placed on the tips of the ring fingers, on the right hands of both the bride and groom.

Then, the “koumbaros” swap the rings between the bride and groom three times.

Three relates to the holy trinity, and the exchange assures the couple they complement each other.

At the end of the betrothal service, the bride and groom are each given a white lit candle, which they hold for the rest of the service.

The candle symbolizes God’s light and reminds the couple to stay within that light.

The candles must be used entirely so they can be left in the church to burn out or be taken home. What is essential is that they never are thrown away.

After the first part of the service, the priest takes the two matrimonial crowns, known as “Stefana,” first crowns the groom and then takes the second “Stefana,” which is attached to the first by a length of ribbon, crowns the bride.

The koumbaros then swap the crowns between the bride and groom three times.

The crowns symbolically tie the couple together for the rest of their lives and symbolize the union of two people.

Two readings follow the couple taking their first steps as a married couple walking around the matrimonial altar three times.

They also drink wine from the same cup.

There’s a final blessing, the crowns are removed, and the service is ended with a closing prayer.

Generally, wedding receptions are spirited and involve a lot of dancing.

The bride celebrates by leading a raucous dance known as the “kalamatiano,” where the bridal party joins hands and skips in a circle.

Other dances are the “sirtaki,” the “tsamiko,” and the rowdy “zebekiko,” and there are more that are linked to particular families or regions.

They are either thrown on the marital bed with the money and rice, eaten by the bridal party while getting ready, or handed out as favors.

Hollywood would have you believe this happens at every Greek wedding, and while that may have been true at one time, it is now officially banned in many places.

Did you like our article for the 9 Best Greek Weddings Traditions? Then read 15 Must-Watch Best Movies About Greece and 4 Gates of Hades Locations Not To Miss in Greece. We will be back.