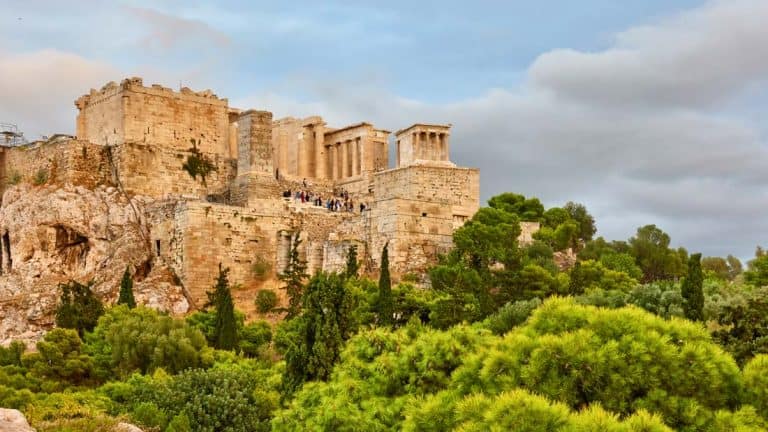 The Acropolis of Athens, located on a limestone hill high above the city, is one of the world’s most famous ancient archaeological sites. Since prehistoric times the Acropolis has served many roles.

The prominent building was a residence to kings, a citadel, a mythical home of the gods, and even a religious center. However, nowadays this place is better known simply as a must-visit sight in the city of Athens.

Hence, add the Acropolis of Athens to your Greece trip and find out why this remarkable place draws thousands of travelers worldwide for yourself, or simply read on.

History of Acropolis in Athens

To fully appreciate the Acropolis, you should understand its origin and its historical value to the Greeks and the world as a whole. As we already mentioned, the Acropolis is made of limestone.

This material dates back to the Late Cretaceous period when dinosaurs still roamed the earth. Though it’s impossible to define the exact date, scientists suppose that the Acropolis’ flat top is ancient, as its construction likely dates back to the Bronze Age.

Throughout the centuries, the Acropolis was partially ruined and rebuilt over and over again. The imposing structure stood through the Bronze Age, the Greek Dark Ages, and the Golden Age, absorbing the greatness and the downfalls of those times.

The Acropolis comprises iconic structures including the Pantheon, the Propylaea, the temple of Athena Nike, the Erechtheion, and the statue of Athena Promachos.

Each of them is unique in their own way. Thus, when you visit the Acropolis, make sure to stop by each of the structures and immerse yourself fully in Greek history.

By the way, thousands of years ago, you could find plenty of Acropolises, since they were built mainly for defense purposes.

As for the Acropolis of Athens, the story is slightly different. The initial goal of this building was to offer a place for worship of the Goddess Athena rather than be used for military purposes.

Acropolis embodies the Greek ideals of freedom and democracy. Yet, despite having symbolic and cultural value for Greeks, the sculptures were removed from the Acropolis by Lord Elgin.

Hence, nowadays, more than half of the Parthenon sculptures are stored in the British Museum, located in London. Though the Greeks insist for exhibits to be returned to the motherland, this issue remains unsolved.

If you are wondering if the Acropolis is worth visiting, here is the answer. It is ranked high among the world’s most famous attractions. Hence, exploring the Acropolis could be one of the main highlights of your Athens vacation.

There’s no better way to immerse yourself in times of ancient civilization, than by stepping inside this incredible sight.

Facts about the Acropolis of Athens

As you may already know, the Acropolis of Athens is one the most famous attractions in Greece. But did you know that the Acropolis was a colorful place once?

Though it seems that this place has always been plain, the ancient Greeks loved colors. Hence all the statues were painted in bright color combinations. Unfortunately, that’s not visible today.

Another interesting fact, that is still present today, is that the Acropolis has multiple cave sanctuaries. These caves were used for contacting deities that appealed to the needs of the common folk. Once you’re here, prepare to get up close to something immemorial.

The Acropolis faced many hardships. During one of them, the Bavarian king even considered building his palace on the ruins of the Acropolis. But fortunately, he changed his mind about all the projects of the future palace, and the Acropolis remained untouched.

Through the centuries, the Acropolis was transformed into churches, mosques, and many other things. Consequently, it comes as no surprise that the Acropolis earned UNESCO World Cultural Heritage site title.

All in all, the breathtaking Acropolis of Athens is an integral part of any Greece vacation because, from the moment you enter the area, you feel ready to embark on a journey through the different history periods.

Hence this place appeals to so many wanderlusters and leaves them with only good memories.

Make your trip worth remembering by adding the Acropolis of Athens to your Greece itinerary!