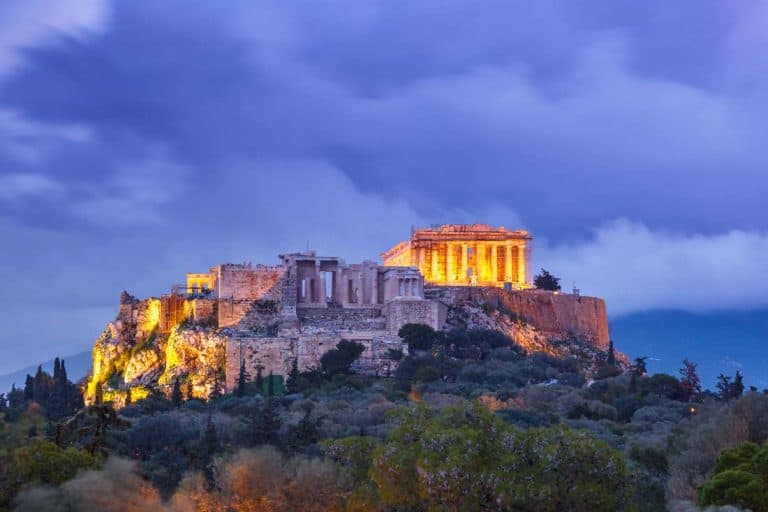 Greece is undoubtedly one of the world’s most popular tourist destinations, and there’s a good reason for that, but why exactly do people ask what is Greece famous for. The country has a rich modern and ancient history, countless beautiful beaches, and a Mediterranean climate. It really cannot help but attract a slew of enchanted visitors from the world over throughout the year.

However, Greece is not what most people throughout the world believe it to be. The country is incredibly diversified, and it is not an exaggeration to claim that a lifetime is not enough to uncover all of its mysteries.

Prepare for a case of acute wanderlust because you’re about to discover precisely what Greece is known for, from ancient Greek inventions that affected the present world to rock pillar monasteries.

What Is Greece Famous For: The Main Reasons

Greece is to thank you for your ability to vote and participate in your government. Greece, specifically Athens, is credited with inventing Democracy as a form of government. The name democracy itself means “the people govern,” coming from the Greek words “demos” for people and “Kratos” for power.

The original Democracy was open, with all citizens, a male Athenian at the time, voting on bills and governance. The concept of a jury composed of peers was also introduced at that time, as was the concept of public officials being held accountable.

Greece is also regarded as the cradle of Western philosophy. Socrates is considered to be the founder of western philosophy, according to his Socratic method of questioning to discover the truth and for steering philosophy away from natural science to existentialism and morality.

Socrates’ death and life have had a lasting impact. His students, like Plato, subsequently founded his school of thought and continued to make significant contributions to science and western philosophy.

Plato was also Aristotle’s instructor, whose numerous and diverse contributions to philosophy and science are still the foundation of western thought.

3. Geometry and the Pythagorean Theorem

Although the mathematical principle of geometry was first developed in Babylonia and Egypt, the Greeks expanded on it and created a deductive approach for geometric facts.

Pythagoras, Thales of Miletus, Euclid, and Archimedes, all Greek mathematicians, initiated the geometric axioms that kids still learn in schools today and are crucial in design and architecture.

Every four years, the Ancient Olympics Were held in Olympia, Greece. The Olympic Games were athletic competitions with a religious twist back then, and Greek city-states stopped all their ongoing battles for the games.

The ancient Olympic Games inspired Barron Pierre de Coubertin to form the International Olympic Committee in 1894 to resurrect the Games and all the principles they embodied.

The Panathenaic Stadium, also identified as Kallimarmaro, hosted the first Modern Olympic Games in Athens in 1896.

Many ancient marvels have vanished with time, but the Theatre of Epidaurus still stands. In early times, religious festivals and performances were held in honor of the god of medicine, Asklepios.

Thousands of people visit the place each year to marvel at its magnificence and enjoy summer events and festivities. Near modern-day Lygourio, on the western side of Cynortion Mountain, near Asklepios’ ancient shrine.

Greek mythology’s stories are well-known all across the world. Through countless gods and heroes, myths explained the genesis of the world. The mythology revolves around 12 Olympic gods, each playing a distinct role. Mount Olympus, Greece’s tallest mountain, was home to all gods.

Odyssey, Homer’s Iliad, and Hesiod’s Theogony are the earliest known origins of mythology. Numerous museums have exhibits about Greek mythology, notably the Museum of Ancient Olympia, which has a sculpture collection.

7. Cartography and Creation of Map

Having evolved to google maps from flat foldable maps, we have Ancient Greeks to thank for cartography and map-making. A revolutionary cartographer born between 611 and 610 BC, Anaximander introduced this skill to Greece.

He drew maps of the world’s populated areas using longitude and latitude. Parts of Europe, Pillars of Hercules in the west, Ethiopia, and River Nile were all on his map.

The Acropolis is a collection of historic temples and structures, the most famous of which is the Parthenon. The majority were constructed during Pericles’ Golden Age in the 5th century. The Acropolis is a UNESCO world heritage monument that you should not miss while visiting Athens. Visit and learn about its intriguing history, social significance, and architecture with a qualified guide or alone.

Set up near the Acropolis in 473 BC, the Tower of Winds is the world’s first clock tower.

Its goal was to assist merchants in determining delivery times for their goods. It served as a weather station as well. It has a water clock and eight sundials, and it still stands in Plaka today.

The Sanctuary of Delphi is a UNESCO World Heritage Site and among Greece’s most recognized landmarks.

The surrounding landscape is magnificent, especially during spring, as it is situated on the slopes of Mount Parnassos. On one side, it looks out over the Valley of Phokis and a coastal plain on the other.

The Greek Islands, dispersed throughout the Ionian and Aegean Seas, are popular with affluent holidaymakers worldwide. The number is in the thousands. In reality, no one knows how many islands there are.

Some estimates put the number at 6,000, with the inhabited ones being only 170. However, you’ll discover paradise in every one of them. Crete is the largest, and Evia is the second largest. Enjoy a fun vacation island-hopping by taking a ferry ride!

The Temple of Hephaestus also referred to as the Theseion in ancient times, is a Greek temple that is well-preserved and still fully intact.

It’s a Doric peripteral temple, which means columns and a portico encircle. It sits northwest of Athens’ Agora on the summit of a hill.

In 1988, the Meteora became a UNESCO World Heritage Site for its natural and architectural marvels. It is one of the most renowned Eastern Orthodox sanctuaries in Greece and worldwide because of its gigantic column-like formations of rocks.

This is one of Greece’s most popular attractions because of the breathtaking vistas. Twenty-four monasteries existed on the tall pillars that soared over the tranquil valley below in the 16th century. There are now six monasteries in operation with steps and bridges providing access.

For English-speaking visitors, most of the Greek language will be familiar. Most English words come from Greek terminology, which explains why.

These terms are in philosophy, history, psychology, and other fields. Around 4000 BC, the forerunners of the Ancient Greek language are supposed to have emerged.

The Odyssey and Iliad, as well as Pericles’ Golden Period, were written in Ancient Greek. During the Roman and Hellenistic periods, the language morphed into Koine Greek, which they used and adopted by the early Byzantine Empire as its official language. Although English is commonly spoken in Greece, learning a few words before you go is fun.

If you are a foodie, Greece will be a dream. The cuisine is one of the most diversified and delectable globally, with neighboring Turkey and Italy’s cuisine inspiring traditional foods. Flavors that mirror these influences are street food delicacies like moussaka and pastitsio.

Greece is also a global ambassador for the Mediterranean diet, popular among health-conscious individuals. It is made with high-quality ingredients like fresh vegetables and grains and extra virgin olive oil. Greece also produces outstanding wines, and the pastries galaktoboureko and baklava are popular in the country.

What is the official name of Greece?

Greece is officially the Hellenic Republic.

Do they speak English in Greece?

The official language in Greece is Greek. However, English is widely spoken, and English-speaking travelers should not have problems communicating in the city.

What is the capital of Greece?

Athens is the capital city of Greece, located in Eastern Greece, near its port Piraeus on the Saronic Gulf.

If you wonder, the list of what is Greece famous for does not end here. Each Greek region offers many things to do beyond the main cities. That is why we have lots and lots of articles for popular things to do in Greece.

Also, please read our article for exploring the 14 top day trips around Athens.

Do you like our article about what is Greece famous for? Also, read: