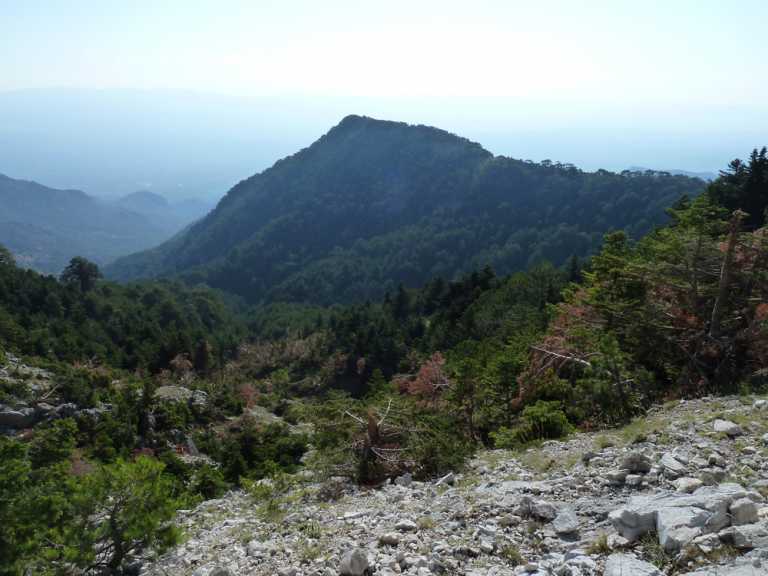 Taygetos mountain is the highest mountain in Peloponnese Greece, boasting a height of 2407 meters. Beautiful forests, fragrant  phrygana shrubs, gorges and ravines make Taygetos mount trekking a fascinating experience. Its highest summit, Prophet Elias, its name was derived from the homonymous chapel that was built there in ancient times, is one of the biggest natural pyramids in the world.

There are many Taygetos mount trekking trails and routes leading to the mountain peak.  The most popular  trekking routes are 2. The first one, is a difficult one. It starts from the Basil forest (Agios Dimitrios – Mouzon – Ridge Spanakaki – Top ). It involves crossing the ridge by a narrow path which on both sides has a cliff. The view is incredible and the adrenaline is high. Most mountaineers usually choose the second trekking route, which starts from Magganiari spring at an altitude of 980 meters, then climbs to the Taygetos shelter and finally to the prophet Elias.

We first went to Sparta and then followed the route that leads to Gytheio. After 7 km we saw on our left hand a sign that lead us to the shelter and the villages of Anogeia and Paliopanagia. We drove until the end of the asphalt road where the Magganiari spring was.

We left the car and we entered into the trail next to the spring. The signage made by the mountaineering club of Sparta was very good and it was impossible to loose the way. We kept following the path though a dense forest of black pines and firs. The path continues through the forest without getting too steep, and leads to the Tripodas spring, a name that also applies to the entire mountainside. From here on, the path becomes steeper and eventually intersects the European E4 path (Katafýgio-Lakkómata segment ). Then the path took us to the Varvára spring, and finally to the Taygetos shelter. The trekking from Magganiari spring to the Taygetos shelter has an altitude difference of 570 meters and takes almost 2 hours and a half. The trekking from the shelter to the Profitis Elias summit (2,407 meters)  takes about two and a half hours on a marked path.

From the shelter, after a short forest route, you pass the positions Livadia (Grasslands) Goubes- Akonia – Plakoures – Portes (Doors) and finally reach the peak.

Every year during the celebration of the Prophet Elias on the 20th of July, pilgrims and trailblazers who enjoy trekking,  climb to the top to pay a visit to the ruined chapel and to admire the shadow of the pyramid during the sunrise, known as the Pyramid Phenomenon.  The bell strikes at 2 am and the Divine Liturgy lasts until the sunrise. The custom requires 2 fires during the night with candles and incense.  The one in the eastern of Church lighted from the people from Lakonia and the other in the western ,from the people of Messinia. Although the night is too cold there, there is the possibility not to find a place to spend the night. The visitors are numbered to hundreds and they all stay either at that top or at a lower point.

Check these amateur videos from the next morning where lots of people were waiting for the Pyramid to “show up”.