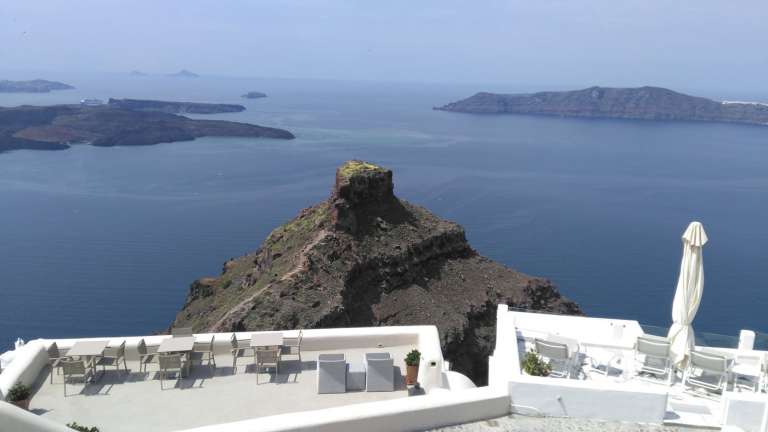 Santorini Caldera is among the most magnificent things that people admire on the island. This Aegean sea island would be far less impressive without this.

Santorini island in the Cyclades, is a volcanic island. You may wonder if the caldera of Santorini is active? To be more exact, it is an active volcano, now as we speak! There are more volcanoes in Greece.

Countless years ago, the central part of the island collapsed into the sea due to volcanic activity, developing a unique ocean blue lagoon.

From that collapse, Santorini Caldera appeared.

What is the Famous View of the Caldera on Santorini Island?

If you look at Santorini’s caldera from above, it is like two islands. The first part is the one you usually see in many photos, and the other is the one with the beaches and the rest of the island.

The specific towns and villages that are around and look at the Santorini Caldera are pretty famous.

These are Fira and Firostefani, Imerovigli, and Oia. They are perched so far above the sea that it might also be a painting.

How Deep is the Caldera in Santorini?

Inside that formation, there are two small volcanic islands, precisely at the center of Santorini Caldera; Nea (“New”) Kameni & Palea (“Old”) Kameni.

What does Caldera mean?

When you look for a hotel in the towns of Fira and Firostefani, Imerovigli, and Oia, you will experience the “caldera view” from the cliffs of the Caldera. That means that your hotel room looks towards the Caldera.

From there, you see Palea Kameni and Nea Kameni.

That is the norm with the majority of hotels and villas in these towns.

There are some exceptions, not at the steep hillside of Santorini. Such exist in the mainland.

The famous island of Santorini sunset is seen from most of the Caldera hotels, as the sun slowly gets lower to the far-end of Oia.

However, keep in mind that even from Oia, most walk to the far end of the village where they see the complete sunset and not half of it.

What is a Caldera Volcano in Greece?

The term of Caldera means a volcanic function formed by the collapse of a volcano into itself, making it a significant, unique type of volcanic crater.

A caldera collapse is usually activated by the emptying of the magma chamber below the volcano, as the outcome of a massive volcanic eruption.

When Did Santorini last Erupt?

The Kameni Islands formed after the Caldera. There were 11 eruptions from 197 B.C. After these, the two islands came into life. The most recent eruption at Santorini was in 1950 on Nea Kameni, the northern peninsula.

The eruption was phreatic and lasted less than a month.

The Santorini Caldera dates back around 70,000 years. During the Minoan Eruption, that ring was destroyed and went underwater.

That eruption was a cataclysmic event for that period, compared -and five times more massive- to the Krakatoa eruption on the island of Indonesia. The death toll throughout the Aegean islands rose to 40.000 people.

Allegedly, the occupants of Santorini evacuated before the event. Now that you know about this, see how the Caldera looks from your hotel view.

Legends are Born for the Caldera Volcano Eruption

Allegedly Atlantis stood where Santorini was. Atlantis is mentioned in Plato’s works. Some think it is an allegory for hubris, while others claim that it was an actual place related to the event.

Many historians believe that Santorini is related to the myth.

What to Do in Santorini, Greece?

You can visit Caldera, Nea, and Palaia Kameni with the half-day or full-day boat tours that are frequent in the summertime.

There is an outstanding number of activities while on the island, and you’ll not get bored at all.  A whole post with the things to do in Santorini is here. Here are some ideas we know about:

Getting Around in Santorini island, Greece

Here are some hot tips on how to get to Santorini and where to stay. These locations are with the warm beaches.

The caldera of Santorini is a magnificent spectacle.

This island has bright colors and excellent weather. That is why many prefer it for vacations in Greece and why you have to visit Santorini.

1 thought on “Why Stay in the Magnificent Santorini Caldera”