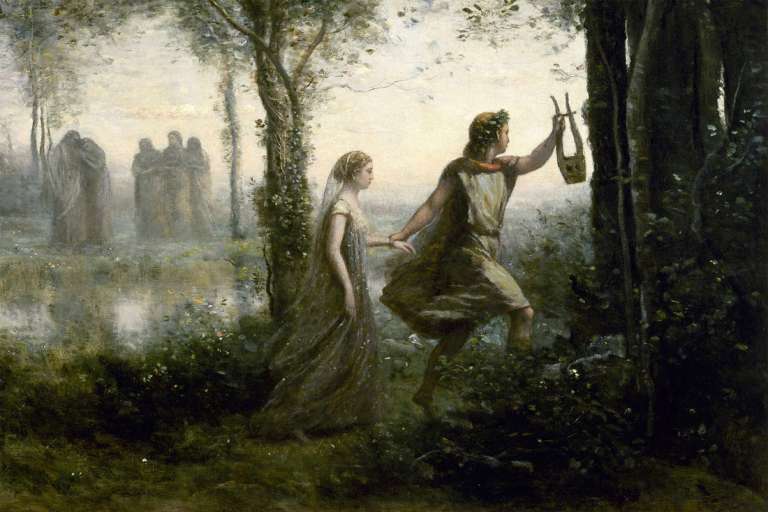 Love in Greece continues with the touching story of Orpheus and Eurydice. A spectacular myth from ancient greek mythology where love conquers death, but lack of patience turns it around. Orpheus loved Eurydice and claimed her back from Hades.

Numerous theatrical plays, movies, and lyrics have been based on this myth.

Orpheus was the son of Thiagros (king of Thrace), a gifted musician, and a student of Apollo. The myth says he played his lyre so well that even wild beasts were enchanted.

Orpheus participated in the Argonauts Campaign, where he helped Jason (with his lyre and music) to defeat the Sirens. After that campaign, Orpheus returned to his native land, Pieria (Northern Greece).

There he met Eurydice while strolling through a forest. They fell in love and eventually got married.

Eurydice was an oak Nymph. Very few things are known about Eurydice, perhaps because she was just a Nymph (lower ranking deities). Legend says that she was (maybe) a daughter of god Apollo.

How do Hades Orpheus and Eurydice Myth End?

Aristaios, a dearest friend of Orpheus, tried to rape Eurydice. She escaped, but a snake bit her while running through the woods, and she died on the spot.

Orpheus was beyond consolation. His music changed to become sorrowful. The impact of such change produced solid emotions for the gods since they allowed him to descend to the underworld and meet her.

Orpheus enchanted Cerberus, the guardian of the Gates of Hades, with his lyre, and the dreadful three-headed beat let his walkthrough. Pluto, the god of the underworld, was enchanted so much that he permitted Orpheus to take Eurydice back to the world of the living (and back to life). That was something profound and unheard of, but Pluto had some terms…

You may know that Hermes, apart from being related to Commerce, was also called Soul Companion as he escorted souls on their way to the underworld. In this myth, Hermes acts oppositely. He accompanies a dead soul to life. Hermes would escort Eurydice on the way back to earth.

Orpheus had to walk without looking back at Eurydice’s soul until they reached earth. Not even a glance was allowed. If he looked then, Eurydice would return to the underworld forever.

What did Orpheus do wrong?

Orpheus agreed, but moments before their exit, he turned his head, and disaster happened. Eurydice immediately disappeared from his sight.

He was emotionally destroyed. He lost his eternal love due to his desire and weakness to keep the rules. For the rest of his life, he wandered in the forests, playing sad tunes with his lyre, remaining distant from all other Nymphs who tried to enchant him.

He was ultimately killed by the followers of Dionysus (Mainades); they tore him to pieces. The myth says his head and lyre were thrown in the river but ended up on the island of Lesvos.

What is the moral story of Orpheus and Eurydice?

This myth can discuss different things, even for the virtue of patience. On top, someone will see a remarkable resemblance with the story of Lot from the bible and his wife, who turned into a salt column because she disobeyed the instruction not to look back to Sodom and Gomorrah.

It seems like myths find their place in stories of different generations.

Here is an excellent visualization of the myth’s tragic love story.

The story is depicted in several works by artists, including Titian, Peter Paul Rubens, Nicolas Poussin, Corot, and Bracha Ettinger.

Search around and see what all these artists saw in this ancient Greek myth.

If you enjoyed this great myth, you would be thrilled with: 15 Must-Watch Best Movies About Greece.

1 thought on “The Tragic Hades Orpheus and Eurydice Myth”