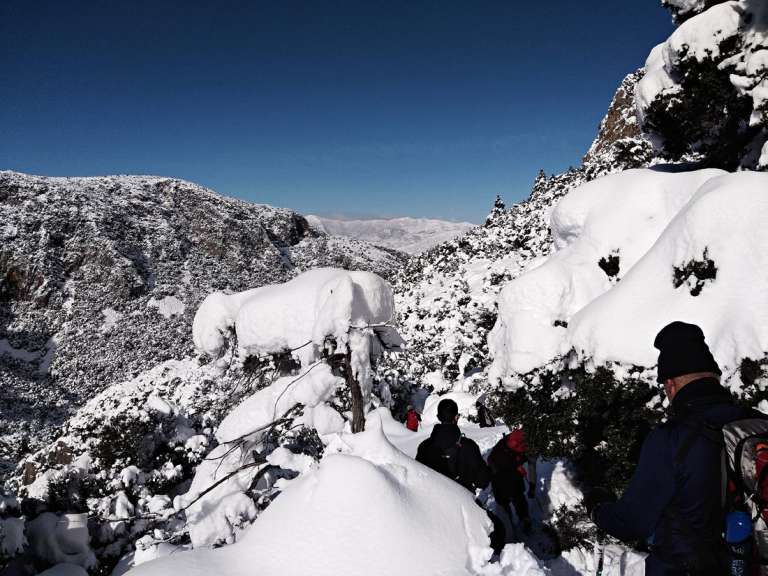 Many interesting sites and landmarks reside on this mountain, like the Oracle of Delphi.

Parnassus was sacred to the god Dionysus. On top of that, in Greek mythology, this mountain was sacred to Apollo (thus the Delphi). Delphi is considered a UNESCO World Heritage site.

Its height is 2457mt at its tallest point.

Lots of villages reside around the mountain, and many are popular.

The most popular is Arahova, one of the most prominent ski centers in Greece. That includes the famous slopes of Mount Parnassus ski centre: Kellaria and Fterolakka.

The village of Agoriani is another popular travel destination for Greeks.

At the feet of the mountain is the sea of the Gulf of Corinth with great seaside cities and villages like Galaxidi, Itea, Antikyra.

On top of that, Mount Parnassus is a popular trekking destination since there multiple routes all over the mountain.

This mountain and the surrounding area attract people all year round.

Imagine that the Arahova ski resort and installations are no more than 2 hours driving time from Athens.

What is the etymology of Parnassus? The word “Parna” means a house or temple. So the sum of the phrase means the mountain of the home of the god.

Parnassus was considered a sacred mountain. Why is Mount Parnassus sacred?

According to the myth, it relates to Dionysus, its mysteries, and Apollo.

It was also the home of the Muses and referred to Pegasus, the mythical winged horse.

Furthermore, the famous Corycian Cave was here, dedicated to Pan (the God who was half a goat).

It was our first winter trekking trip (with snow) at Parnassus and proved to be lots of fun, with tons of snow. It was that period where lots of snow fell in a short time all over Greece.

We planned to trek immediately after the first days of snowfall; the snow was powder-like.

However, that sudden snowfall blocked all roads leading to the mountains.

As we arranged to trek with a group of 50 people, our coach (bus), the bus couldn’t reach the initial starting point to start our 5-hour trekking.

A small car could but not a big coach.

As we approached the mountain, a decision came up from the trip leader and mountain guide to trek from a different place, but on the same peak.

That place was Amfikleia and was reachable.

That route is named: From Amfikleia to the Gorge of Keramidiou.

Our trekking started from within Amifikleia, but 10 minutes after we left the village behind us and started moving up the northern part of Mount Parnassus.

It was cold, and despite moving all the time upwards, we didn’t remove our outer layers (hard-shells). Yes, it was that cold!

We didn’t encounter constant strong winds, except in a couple of turns.

It was cloudy all the time with sun breaks around late noon. However, snow was always at the waist level.

The head of the team had to open the path by plowing through the snow with his body.

The rest of the team followed along, placing their feet carefully on the steps of the person ahead of them.

The snow was fresh on Mount Parnassus, and everything was covered so much.

It was not possible to see if the next step (or the ones at the left and right of our feet) was hiding plants and slippery rocks or solid ground.

The movement was slow, but that gave us the time to admire the landscape a lot.

Going always up on a rather steep terrain and sharp angle did build a strong pair of quadriceps.

Going down was a bit challenging as previously walked over snow was starting to freeze, and terrain was rather slippery.

The team managed to return to Amfikleia safe and hungry.

To cope with the hunger coming from all that exercise, we moved to the nearby city of Livadeia, famous for anyone seeking for roast meat, especially “souvlaki.”

“Kria” is an excellent stone paved area with a river (inside the city) and small waterfalls. It also has a hiking route going high on the mountains from where you can admire the greater area.

Having fulfilled all five senses, we took the coach back to Athens.

Were we tired? Yes, but it was a splendid trekking trip, despite the last-minute change.

Tip: When you trek in winter, you need to use gear that is proper for cold weather conditions.

Explore the hiking gear section of our blog for such.