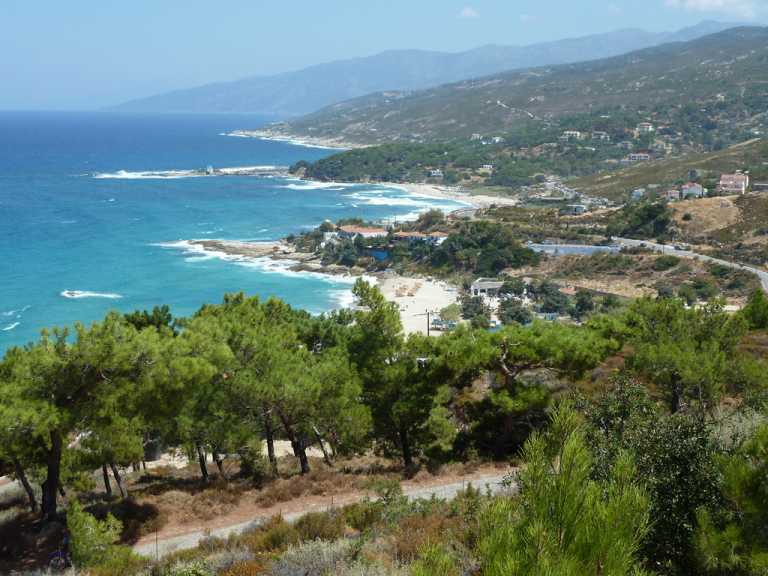 Ikaria, named after Icarus of Greek mythology, is located ten miles southwest of Samos in the Aegean Sea. Ikarus flew too close to the sun, and his wings melted. He fell where the Ikaria island is.

It is one of those unique, purely natural, unspoiled, and unforgettable parts of the world, famous for the long life of its habitats.

This pristine enclave of nature, culture, and history is included in the world’s Blue Zone. An area where people live longer, healthier lives.

Why Visit the Island of Ikaria?

One trip to the island will understand why it is a mecca for naturalists.

The topography of this Blue Zone island is a contrast between verdant slopes and barren, steep rocks.

The island is predominantly mountainous, with lush green Ikarian villages nestled on the plains along the coast.

What are the Best Beaches in Ikaria?

The most popular, sandy beaches are on the north side of Ikaria, Greece.

The beaches on the island’s south side tend to be less crowded but consist of sand, rocks, and pebbles along the shoreline.

The beaches of Ikaria are varied, from remote sandy beaches where only pure nature is to be found to cosmopolitan resort beaches in a few more substantial towns.

The clarity and brilliance of the water are unparalleled, with the Ikaria beaches and sea being one of the cleanest in the world.

What to See in Ikaria Greece?

The Castle of Koskina sits atop a mountain peak overlooking the village of Koskina. Built in the 10th century A.D., this Byzantine Castle fortress is an idyllic representation of Ikaria’s deep historical ties to the region.

The castle was built to protect the island against pirates and enemies. It is strategically positioned at the top of a steep mountain.

Drakano Fortress is another representation of the importance of the island. An Athenian watchtower was built during the Hellenic period, dating back to the 4th Century during the reign of Alexander the Great.

The forty-four-foot high limestone tower served as an observation point, overlooking the traffic in the Aegean Sea between Ikaria and Samos.

It was part of a garrison and city known for its robust red wine.

What are the Things to Do in Ikaria?

Hiking is a big part of island life on Ikaria, and the many trails that crisscross the island are of particular interest to nature lovers and hikers alike.

The paths, known locally as “monopatia,” harken to earlier times. They make up a transportation web that connects the far-flung villages, farmland, and commercial centers.

These passageways still in use today connect the island’s commercial activity in the mountains to the ports along the sea coast.

The ‘Round of the Rahes On Foot’ embodies the importance of the “monopatia” (means: hiking routes). This self-guided tour starts in the village region of Christos-Raches.

Forming a circle, the trail is 25 kilometers long, crossing all types of terrain, beginning at sea level to rise to 500 feet.

Hiking the trail will take you through the brush, forest, farmland, stone-paved mule tracks, and dirt rounds.

Experience every conceivable terrain, with breathtaking vistas to be seen around each corner.

The Hot Springs of Ikaria possess the world’s best healing qualities. That is not new. It dates back to the 1st century B.C. The hot springs at Therma have been the center for hydro-therapy.

Evidence of the springs is among archaeological ruins such as the Roman baths at Therma. Even today, Therma remains the center for hydro-therapy on the island, with numerous guesthouses catering to the practice.

There are several spots where the hot mineral springs flow into the sea along the coast. You can bathe and enjoy the medicinal benefits of the springs.

Are you looking for adventures? There are several activities, among which are winery tours. The tours are available for those who want to sample the excellent, intense Ikarian wine.

Sailing and Water Sports in Ikaria

Several water activities are also available, ranging from snorkeling, surfing, windsurfing in the Faros area, and scuba diving on through to kayaking sailing. Also, check Globo Surf for tips.

Sailing the Aegean is an excellent way to explore several bays and beaches. There are many unreachable by any other means, and you can watch the indigenous sea mammals on the road.

It is a quick sea voyage to visit the islands of Samos and Fournoi. Patmos and Lipsi are found just south of Ikaria and are in the most beautiful part of the Aegean Sea.

Ikaria is one of the best Greek Islands for nature hikers, and you will experience all these reasons.

There is so much to experience in Ikaria, Greece Blue Zone island. Find something for everyone on this 225 square kilometer island.

There is no chance that many come back over and over again.

FAQs for an Ikarian Trip

What are the Blue Zones?

There is a whole website presenting the locations that belong to the Blue Zones worldwide. These places relate to longevity, better life.

The blue zones project made the Ikarian diet a popular subject in the global longevity community.

There is a rich-media website dedicated to Blue Zones.

It contains all the info and research, even recipes and more. Here is a book related to Blue Zones and the lessons to live longer.

The Blue zones project is not just a recording of these locations but actual research on how and why people are happy in one place and how that relates to the quality of life and longevity.

It’s been around for years.

Have you been to Ikaria?