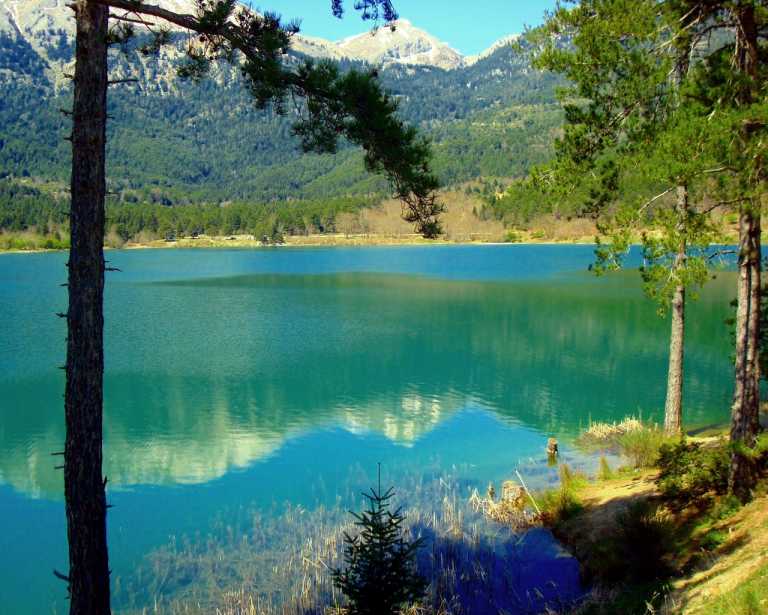 Following the road from Kiato to the mountainous Korinthos and having left behind the endless vineyards ( which at the end of summer give us the famous currants ), we reach the plain Stymfalia with the “mythical” Lake Doxa.

It is one of the few mountainous lakes in Greece, at an altitude of 626m.

The surface of the lake is not constant but varies depending on the season. In winter, its surface reaches 7,700 acres, while during the summer is limited to 3,500 acres. Some drought years can even dry up completely.

It is considered an essential mountainous wetland, not only for Korinthos but for the whole Peloponnese.

How to Get to Lake Doxa

We follow the road that goes uphill to the slopes of Great Ziria, while on the left, we see the Oligyrtos mountain.

After passing the village Karteri, we arrive at the Kastania village (1,100 m altitude), the natural boundary between Stymfalia and Feneos.

The view from here is spectacular. On one side, we see the valley of Stymfalia and from the other the plateau of Feneo.

The plateau of Feneos is surrounded by the wooded slopes of Helmos and Ziria.

The plateau of Feneos is the remains of an old lake, which disappeared in one night.

The cause was the creation of a sink, an impressive opening of diameter about 10 meters, located in the southern part of the plateau on the road Moshia- Mati.

Even today, the waters from the rain, which end up to the plateau from the surrounding mountains, fall into the sink.

After traveling a hidden route of about 10 km, they spring near the village Lykouri, forming the river Ladonas.

After passing the picturesque villages of Moshia, Messino, and Ancient Feneo ( Kalyvia ), we see the artificial lake Doxa.

The small but beautiful lake is located at an altitude of 890 meters, in the middle of an area full of verdant firs, pines, and oaks.

It was created in 1998 after the construction of a dam that holds the water of the mountainous river Doxa. In the heart of the lake on a small peninsula stands the chapel of St. Fanourios or Palaiomonastiro.

Lake Doxa is the starting point of our hiking trip.

From this point, a marked dirt road begins, which leads to a short path. We walk on a rural road where after 2 km we reach a dam.

From the dam, an uphill path starts, which passes through a fantastic forest of firs and pines, while the view to the lake is breathtaking.

The trail ends up to the narrow passage between Ntourntouvana and the ridge of Helmos, known as Kinigos.

We are now at an altitude of 1,550 m. From this point, the road that connects lake Doxa with Planitero is passing.

We now have enough choices. We can follow the road Lake Doxa – Planitero and go back to the lake or the lakeside village Panorama.

By following a route to the north of Kinigos we can ascend to the top of the nearest peak of Helmos, the Nisi peak (2,040 m), and follow the same route for the return.

Finally, following a route south of Kinigos, we ascend to the northwest slopes of Ntourntouvana mountain and reach the narrow passage between the peaks of Ntourntouvana – Triantafillia, located at an altitude of just below 2,000 m.

We return to the narrow passage between Ntourntouvana – Triantafillia and descend a steep ravine up to position Skliva, where the road starts.

After a route of about 6 km, we go back to the lake.

The mountainous prefecture of Korinthos certainly has many hidden beauties. So get ready and go to discover it.

— Article provided by The Hiking Experience