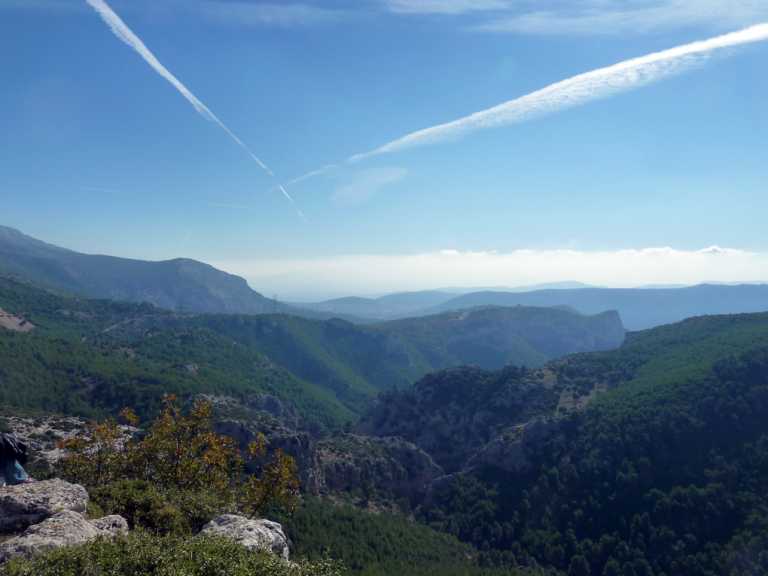 Hiking in Athens? Can it be done? Is it available, you may ask? Well, yes, it is.

You can even do it on your own by following a couple of instructions.

It is a fantastic experience with multiple routes to choose from Mt Parnitha.

It was one of these days where we were looking where to go for our Sunday and “stretch our legs” a bit.

Winter was closing relatively fast in Athens, and the scenery changes, along with low temperatures.

However, the weather forecast was good for Athens and Mount Parnitha for that weekend.

So, Fotis Godfavor from “Apodrasi sth Fisi” group, (translated to Escape to Nature, in English) contacted us at the right time to his Facebook group.

We joined them and saw a group of like-minded people who are self-organized and depend on the team effort to have a good time on mountain hiking around Athens.

This week it was time for the “Teleferik (Cable car) parking -> Mpafi refuge (one of our favorites) -> Teleferik” route.

The route is very close to Athens (you can be there from 30 mins to 1 hour tops from any location in Athens) and carefully marked.

It is fantastic to have such an out of the noise place so close.

Parnitha is also considered to be one of the “oxygen providers” of Athens.

Fotis, from the -unofficial- organizing team provided precise instructions for the meeting place and time of departure.

We were there and joined a team of happy mountain clothed hiking individuals of all ages. Some of them were people we have met through other hiking/trekking activities.

Most of the route was very beautiful and serene, changing from steep to smooth in many places.

We had the opportunity to stay at Mpafi refuge for almost 2 hours (as a break) where most of us enjoyed hot chocolate and coffee, chestnut pies, a variety of “mountain cuisine”, the fantastic “rackomelo” of Mpafi, and a breathtaking view.

The total walking length of the route was a good 12 Km, where our way back, tested the physical status of our quadriceps but comforted us with amazing views of Athens while moving down.

The team got a bit shorter as we were coming back since some grabbed the opportunity to ride the cable car (from Mont Parnes Regency Casino) back to the base.

The aftermath for us? Very pleasant tiredness. The one that says, “I am a bit tired but feel calm and full at the same time from my experience in this amazing nature”.

Check the fantastic pictures from this route.

Many travelers to Athens don’t know that there are lots and lots of activities to do around Athens.

Hiking in Athens is something widespread for Athenians.

The mountain of Parnitha hosts deer and lots of kinds of wildlife.

It remains a pleasant break from the buzzing city of Athens, and for those who want to try their luck, the Athens casino is just a few meters away.

This route, although it is unknown to many people and far from the crowded paths of Parnitha, is exciting.

It goes through the stream of Giannoula, the “Theodora’s Rock” (where a fascinating climbing field exists), crosses the Theodora Canyon, and ends up on the hill where the ancient fort of Fili exists.

Most of this route is full of well-carved paths and abandoned dirt roads. There are some problematic points – especially in winter- as you need to cross the stream of Giannoula at three different locations.

This stream carries lots of water during wintertime.

Additionally, the path goes through the riverbed of the Thedoroa stream for almost 1km, where additional painful points exist since you need to climb 2-3m high rocks and the plantation there is also high in many areas.

The total length of the route (with the return to Fili) is about 15Km, and the height difference is about 300m.

You start from Filis avenue, around 680m after its crossing with Thrasivoulou str.

Note that all the paths and dirt roads mentioned here are visible through Google Earth.

However, to see them, you need to activate the option of Google Earth that shows older photos.

We want to thank Linos Papachristou for the waypoint content.