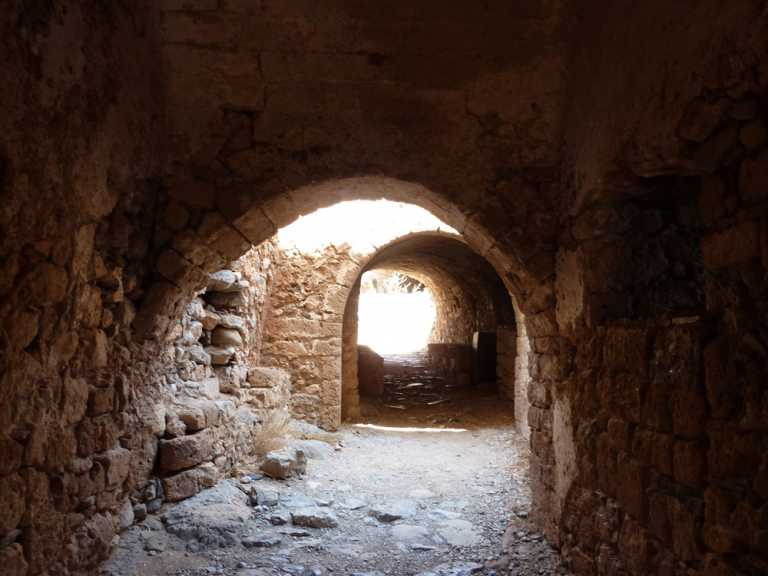 Hiking Monemvasia and its surroundings can be considered as an ideal activity in the region. It’s the perfect place for a hiker who wants relaxing hiking tours inside the Castle as well as for a demanding hiker who looks for difficult hiking trails to the region.

Monemvasia is located in the southeastern Peloponnese in the prefecture of Laconia. 2000 years ago people built up Monemvasia at the top of a 300 meter rock to be protected from the barbarians. The rock island of Monemvasia was part of the mainland until it was cut off by an earthquake in 375 A.D.  Nowadays, it’s connected to the coast by means of a narrow passage. Its name is derived from the two words single and entrance, that is, the only entrance to the fortress town.

If you consider hiking Monemvasia then prepare for a trip to the past. One will discover the lower and upper old town, a perfectly preserved medieval settlement. Monuments and churches are scattered throughout the old town. There are 40 churches hidden in every corner of the village. The oldest church is St. Paul’s, which was built in 956, and today houses the museum. The most well-known church is the 13th century cathedral of Christ Elkomenos. It’s dedicated to Christ who was lead chained to Crucifixion.

While hiking Monemvasia, one will reach on the upper town, through a fortified path. Remains of numerous Byzantine and post-Byzantine buildings are preserved in the area of the upper town which is not inhabited today. The church of St. Sophia, a Byzantine church dating from the 12th century, stands on the highest point of Monemvasia. The sea view and the castle walls from the castle top is breathtaking. Since 1964, both upper and lower town have been under the aegis of the Greek Archaeological Service.

Of course there are also more demanding hiking routes. There is a dense network of well maintained and marked hiking trails in the region of Monemvasia. One fascinating route starts from the picturesque village of Talanta with its mountain gorge known as The Balli Gorge. In the past, 11 flour mills were located in the village. Eventually, through the efforts  of the village cultural association, one of the former mills in the Balis Gorge was restored in 2006. The mill is open to the public every Sunday from 10.00 to 14.00.

The mill is the starting point of a hike through the gorge that terminates at Harahia beach near Daimonia. Estimated duration is 5.5 hours.

Monemvasia itself is quite picturesque but not a place to stay for many days. However, is an excellent base to hike and explore many amazing places nearby! Give it a try!