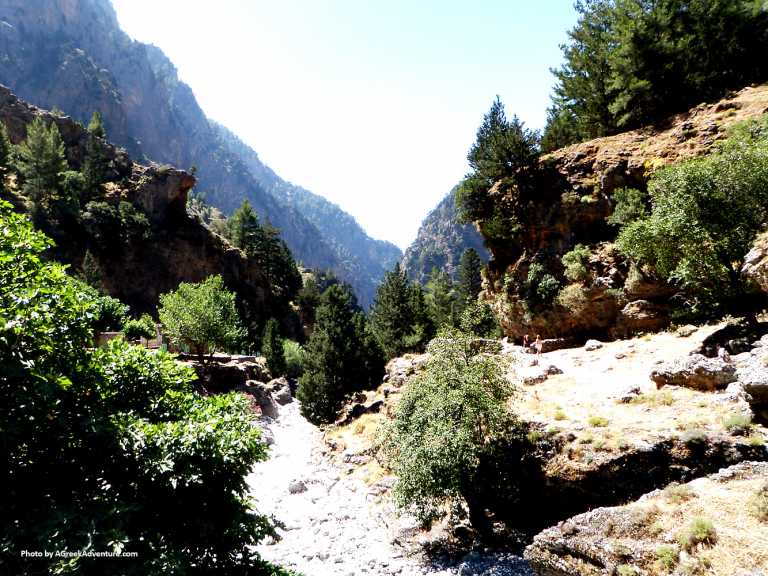 The Samaria Gorge is the most famous gorge for hiking on the island of Crete. It’s the longest gorge in Europe and is located in west Crete, in the White Mountains.

More than a quarter-million tourists choose hiking the Samaria gorge every year from May to October. The gorge is closed to the visitors from the end of October to May.

It looks easy, but it is not for inexperienced hikers, without a guide and especially during summertime. It is long, and heat is scorching.

There is no entrance ticket. You do need functional hiking boots, water, and snacks.

Read our post for 30 best things to do in Crete.

The path starts at an altitude of 1250m at Xiloskalo, at the settlement of Omalos, and then it is a downhill trek following the steep slope down to the shores of the Libyan Sea in the fishing village of Agia Roumeli.

Halfway through the park lies the ruined village of Samaria.

Here is the main resting point where visitors usually stop to get some rest and stroll around the village’s old houses and churches.

Its few houses are now used by the park wardens. Quench your thirst with mountain water running from the gorge’s springs.

The Numbers of Samaria Gorge

The Samaria Gorge is 13 km long, but you have to walk 3 km more from the exit of the National Park of Samaria to Agia Roumeli beach.

The coastal village of Agia Roumeli is the best place to rest, swim and eat, before taking the boat to Chora Sfakion and returning by bus to Chania city.

The width of the gorge is 150m at its widest point and 3m at its narrowest.

The very narrow passage near the end of the gorge is called the “Iron Gates.”  The river Tarraios runs the entire length of the gorge.

The path continues either parallel or crossing the river several times, where visitors, in most cases, have to step on big stones to cross the river.

The river is only a small stream in the summer. Walking through the gorge usually takes from 4 to 6 hours, depending on how fast you walk.

Samaria National Park of the White Mountains Crete, founded in 1962 to the protection and preservation of the scientific and cultural value of the region.

The gorge was abandoned in 1962 when the Greek government declared the area of the national canyon park.

It hosts a particularly rich flora and fauna. During the hiking, you will see large pine and cypress trees, as well as a high number of unique plant species.

You may even meet the Cretan wild goat, which is called “Agrimi” or “Kri-Kri.”

The hiking in the gorge isn’t a stroll. The path is stony and rocky mostly, but there are times where it looks like a forest path.

But don’t worry, the stunning natural beauty will make the hiking a pleasant experience for everyone.

Is there Water in Samaria Gorge?

There are specific locations inside Samaria gorge where you can find water. There are eight stops where you can refill. Each is around 1-1.5km from the other except the last one before the exit. When we did that, things were like:

If you are not an experienced hiker, it is best to book a guided hiking tour. Click here.

How to get to Samaria Gorge?

The cheapest way is to take the public bus ride (KTEL) from Chania town to Omalos.

In Agia Roumeli, you have to take a ferry boat to go to Sfakia, Sougia, and Paleochora and then take the KTEL bus back to Chania.