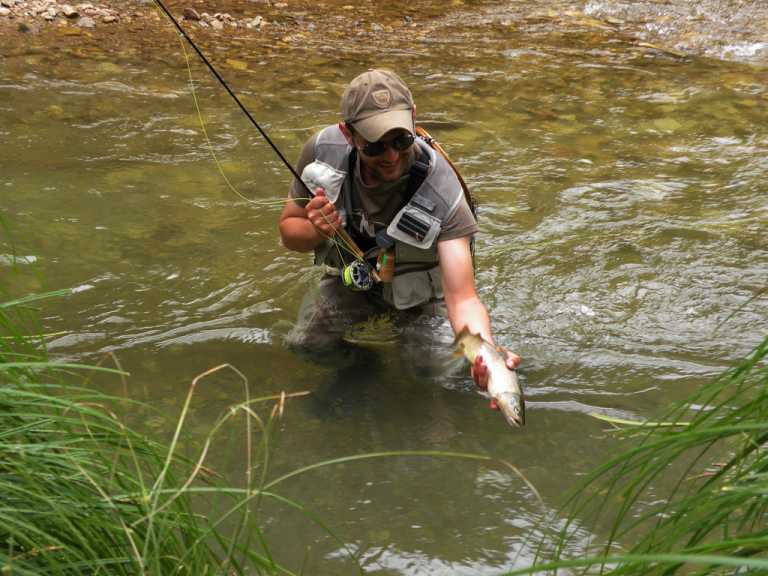 It is well known that the history of Greece is like no other in the world and is studied in almost every school, in every country.

Greek mythology, the Olympic Games, and ancient monuments of cultural heritage have made Greece one of the world’s most documented and visited places. However, what is her contribution to the history of fly-fishing?

The Greek-Roman Claudius Aelianus first referenced fly-fishing in his book “De Animalium Natura,” registered in the 2nd century A.D. His scripts refer to the river Astraeus in Macedonia, then part of the Roman empire, located between the Greek cities of Veroia and Thessalonica.

The local inhabitants were using an artificial fly for their river fishing. Unbelievable as it may sound, this was the beginning of fly-fishing.

Three-quarters of Greece is mountainous terrain. A series of mountains, aligned northwest to southeast, enclose narrow parallel valleys and numerous streams and lakes on the Greek mainland. Greek rivers and streams, at a higher elevation, are inhabited by wild brown trout.

The rainbow trout is imported and comes from America. It was brought to Greece for breeding and dietary purposes.

Its import was that its growth rate is matched faster than that of the brown trout. In a concise amount of time, the rainbow trout managed to acclimatize itself to the environment of the Greek rivers and lakes, just like the brown.

Many rainbow trout regained their freedom from fish farms, whereas others were released into some lakes as part of enrichment programs. The American trout is much more voracious and less discriminating than the native Greek trout, and as a result, it is easier to catch.

In Greece, you can find other species that will take a fly, such as a carp, barbell, European Chub, and in lakes, pike, and perch in north Greece.

Many of our insects: the stonefly, caddis, mayflies, and grasshoppers, are very similar to the same insects in the U.K. and North America.

Fly-fishing is not well known in Greece, and most Greeks are unaware of its existence.

Perhaps it is because of numerous wars and many years of occupation that people did not have the luxury to practice a sport that is considered a privilege of the gentry and certainly requires time.

Poverty and need resulted in fishing for the table, using any available means that produced quick results. We need to mention that 95% of fish we catch are immediately released.

The majority of trout anglers using spinning methods. Fly-fishing featured in Greece during the last decade and has been gradually increasing its supporters.

In 2013 there were about 30 known fly-fishermen in the whole of Greece, but there seemed to be many young fishermen interested.

So Greece is not only a country of Mediterranean beaches, islands, and ouzo. Fly Fishing could be an alternative way to discover the Greece of mountain villages, lakes, rivers, bears, wolves, and, yes, brown trout!!!