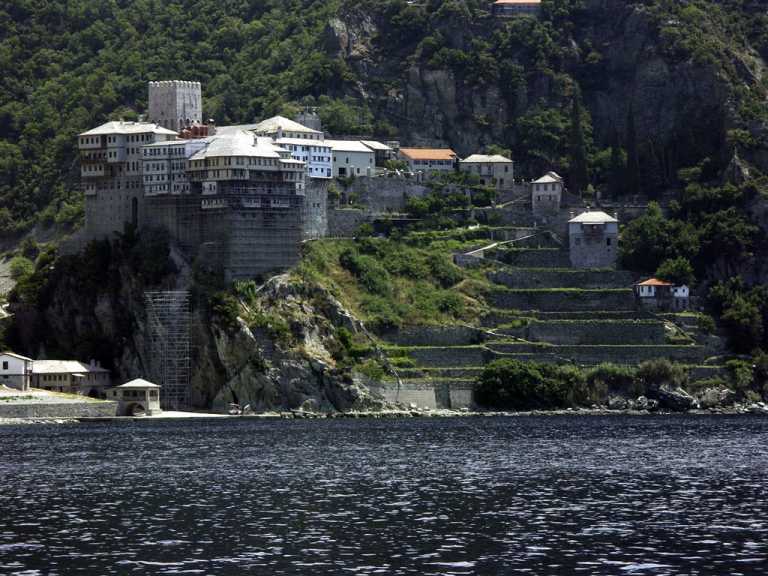 Do you need to getaway? What if you didn’t just follow the standard beach vacation or stress-filled tour groups this time?

What if you instead opted for a vacation place that made you feel as if you were wholly transformed into a tranquil space between reality, beauty, and history. Mount Athos, Greece, is that place.

As a mountain peninsula surrounded by the beautiful Mediterranean Sea, Mount Athos, Greece, is well-known for its nature and a large number of monasteries.

Also known as Agion Oros (“Holy Mountain”), this picturesque mountain is home to 20 monasteries of Eastern Orthodox relation, and whose jurisdiction is directly under the patriarch of Constantinople.

Do you like the outdoors? Take a deep breath and be prepared to be overwhelmed by Mount Athos’ incredible scenery and outdoor activities. Scuba diving near Ammoulani and Ouranoupolis (the primary ferry location for traveling to the monasteries), is a favorite of many tourists as they absorb the underwater delights of the region, as well as other water sports like snorkeling, wake-boarding, and sailing.

Back on land, try mountain biking and horseback riding — or perhaps venture into the virgin forests on your own two feet, hiking into the gorgeous natural surroundings and checking out the pristine terrain with nothing except nature to mesmerize you.

For those more leisurely days, the port of Ouranoupolis offers three-hour boat tours for both men and women that cruise past the edge of the Athos peninsula. Upon return, you can take in some local shopping and check out the Tower of Ouranoupolis, which has been in existence since at least 1344.

If you do venture up to the monasteries, however, enjoy the amazing green valleys, gorges, peaks, coastline, and history dating back to the Byzantine period.

While there are many resorts and hotels to pamper you near Mount Athos, there are also several places to camp nearby, including a campground in Ouranoupolis that puts you in a central location to take on every outdoor adventure you can imagine.

Don’t forget to take in other nearby areas to Mount Athos while in Greece. Try going canyoning in Mount Kissavos, where you can access varying types of canyons all within close proximity. A marvel of nature, these canyons you can experience crystal clear pools of water, water-slides, deep pools to jump into, waterfalls, climbing, mountain biking, and trekking. Or perhaps, take a short trip to the beautiful beaches in the vicinity of Kavala, which provides a great view of Mount Athos, as well as being in a prime area for furthering your adventures with paragliding in Drama, Greece – just a short 25 miles (40km) away.

For history fanatics, no trip would be complete without visiting some ancient archaeological sites. One of the most remarkable, in fact, is the Cave of Petrálona. Known as the most impressive in Europe, this cave was the site with one of the most stunning findings in human history: a 700,000-year-old skull. It is just an hour and forty-five minutes away from Mount Athos, but it is worth it to take in its beauty as you explore the cave, with its innumerable stalactites and stalagmites.

Rejuvenate yourself and make your next vacation matter. Take in the nature and history of Greece, and live life to the fullest by taking a vacation in beautiful Mount Athos.

(We would like to thank dtsiabai for the photos for this article).