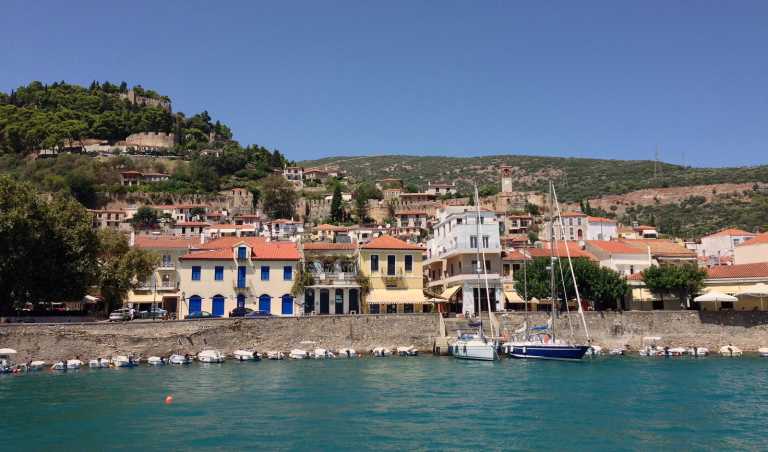 Beaches, nature, architecture and history all come together in one of Greece’s oldest cities.

Nafpaktos is the second largest town of Aetolia-Acarnania and is situated on a bay on the north coast of the Gulf of Corinth.

The city is picturesque, and it has kept its style, beauty and feel for centuries.

Historically the name goes as far back as the Doric period, as the Dorian first used the island to build rafts.

Legend has it that Heraclidea built a fleet of ships in the harbor which was then used to invade the Peloponnese.

Nafpaktos is built amphitheatrically on a pine filled hillside, encircling a harbor that is accessible only to small craft.

The beaches that stretch to the east and west of the harbor are pristine.

Psani, a one-kilometer stretch of beachfront is a particularly lovely spot, annually awarded the E. U. Blue Flag award for marine sustainability.

The mountainous terrain surrounding the city is an environmentalist’s haven. The diverse landscape is heavily wooded, home to oak, birch, fir, beech, plane and chestnut trees.

On the south side of Mount Sarentena is a unique beech forest, the southern-most forest of beech trees found in Europe.

The varied flora provides a home to numerous woodland creatures, ranging from birds and squirrels to wild boar.

There are even six types of woodpeckers found among the trees. The Evinos River is filled with fish, while otters take refuge in some parts of the river.

The city of Nafpaktos

The visual architecture of the city and its surroundings is a wonder to discover.

The walled part of the city forms the historic center of Nafpaktos, with the Venetian fort providing a visually appealing, historically accurate setting, sitting at the mouth of the entrance to the port.

The stone bridges of Nafpaktos are architectural marvels of days gone by.

The most impressive spans are those that cross the Mornos and Evinos tributaries and are unique to the region.

They tell of a transportation legacy, now hidden in the forests, long forgotten and abandoned to the new motorway web.

The Kefalogiofyro Bridge is an exceptional monument to bridge work, preserved since the time of Turkish rule.

The bridge of Artotiva was built during the Venetian reign of the 1400s and is located at the narrowest part of the Evinos River.

Monasteries have always had a significant impact on the area, some dating back to the days of Venetian and Turkish rule. One of the most important of these is the monastery of Panagia Ambelakiotissa.

It is considered to be the Ark of Nafpaktos, housing precious religious artifacts such as the icon of the Virgin Mary and the epitaph of Mariora.

The wooden sculptured temple alter was crafted with delicate technique in 1748 by a local artisan.

The historical monastery of Varnakova was founded in 1077 by St. Arsenio.

The monastery is set amid a panoramic, majestic landscape full of vegetation and tall trees. The monastery played a prominent role during the emancipation era.

For those after less pastoral and more alternative adventures, Nafpaktos offers a variety of options. The Evinos River offers several water activities.

A rafting or kayaking excursion along the river is a perfect way to cool off a warm summer afternoon. If you don’t want to get wet, you can always hike along the river bank, or travel the network of hiking trails around the village of Ano Chora.

These trails are part of a transportation route used in ancient times. Archeological findings indicate that these paths go as far back as 2500 B.C.

Hiking easily translates into climbing, and what better way to understand the land than to climb the mountain trails and talk to the locals. There are mountain climbs that reach as high as 1,700 meters.

Nafpaktos has something to offer most travels.

One of Greece’s oldest cities is also one of its most diverse. Whether it be nature, architecture, history or adventure, Nafpaktos has it in abundance.