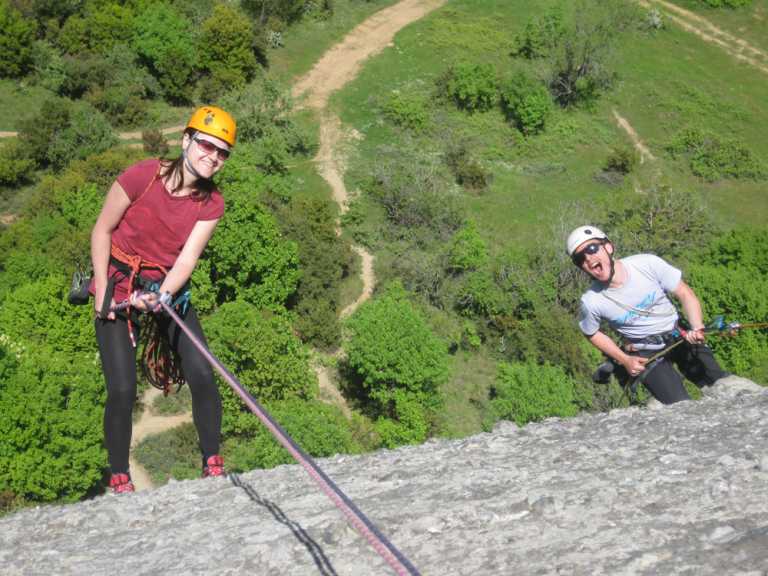 Climbing Meteora is the ultimate climbing challenge for an experienced climber. The region of Meteora lies in the area of Thessaly in Central Greece. It’ s one of the most preferable place for climbing in Europe.   The rocks of Meteora rise over 400 meters above the Peneas valley and the small town of Kalambaka.

Hundreds of rocky towers-other smaller and other “giants”-seem to emerge from a stunning countryside, with lush vegetation. All this scene allures the most demanded climbers and hikers for climbing Meteora.

In 1989, U.N.E.S.C.O characterized the Holy Meteora as a “monument of Humanity that has to be maintained”.

The landscape really has a strange magnetism and a special atmosphere. So, it’s more than obvious why it was chosen as a type of communication and closeness between man and “Holy”. Meteora is a collection of medieval monasteries built on steep sandstone rocks. Six of the monasteries are currently working. The monks of these monasteries were the first who performed climbing Meteora, since this was the only way of reaching a monastery. Later rope ladders and net was used, until the first wooden ladders took over in the early 20th century.

Climbing Meteora is a real adventure amongst the statuesque and often bizarre rock formations. It is divided into two major categories, the cracks (cracks, chimneys) and the slabs. The cracks are graded as strict following the system of Saxons climbing, remarkable with beautiful dynamic climbing. The slabs stand for good technique on the feet, balance and beautiful delicate movements.

It is possible to climb all year round, but autumn and spring are the most preferable. There are also cases where someone can climb pleasantly even winter summer by choosing the correct face orientation.

For climbing is necessary to have 2 sixty meters half ropes, usually 10 quickdraws, 3 slings, a descender, few cords, nuts or friends depending on the route and helmet.  There are fixed belay stations everywhere and the protection is renewed regularly. The rock is extremely unique consisting of stones, pebbles and masses (conglomerate sandstone), offering unique and pleasant difference in movement.

Nowadays there are over 800 climbing routes in Meteora with a wide variety of altitudes and difficulty.

Except for climbing Meteora, the region is an ideal destination for performing activities such as paragliding, mountain biking, pilgrimage and trekking.  It’s a priceless opportunity to explore an interesting combination of rivers, forests & mountains through very different landscapes, in the region. For the accommodation there is a great number of hotels and rooms to rent as well as campsites in the town of  Kalambaka and in Kastraki village.

That is why we created “Mountain Spirit”. It is the outcome of our love for nature, the mountain and its adventures, combined with the vision of Christos Ananiadis (Hellenic Federation of Mountaineering & Climbing Certified  Trainer) and Asterios Serdaris (Ski Trainer). Check the right side of this page for details on getting in touch. Services provided are: simple hiking routes, adventure climbing, winter tours, rock/snow climbing schools, personalized training,  cycling tours, camping tours, city activities, half/full day programmes, adventure trips and VIP mountain trip services.