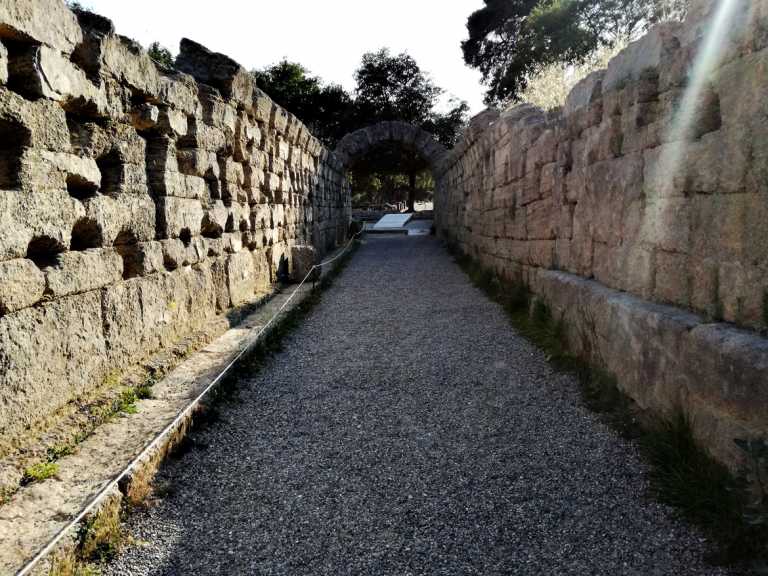 Ancient Olympia Greece is the birthplace of the ancient Olympic Games. Here, athletes from all over the world gathered to compete.

But was it just about “Games”? Let’s clarify this.

The Real Meaning of the Word “Games”

This is a crash course in the Greek language.

Games, in the Greek language and when translated from English, mean the things we play to have fun.

Greeks use the word “paihnidia” when they speak about Games.

For Greeks football is a game, as basketball is; for Greeks, chess is a game, and backgammon is too.

But Greeks don’t use the word games when it comes to archery or track, or marathon running or even boxing and wrestling.

The word they use is “Athlimata” or “Agones.”

The closest translation to that is Sports for the first word, while for the second, some use the word “Races.” It means something to strive for and compete for.

But “races” means something different per country (outside Greece).

The word race usually means something where people (or horses, or dogs) run. But, as you know, the original Olympic “Games” were not just about running.

So “races” is not the exact word. The Greek language has words where a word and its meaning are of a single value, even when used in different sentences.

We suppose, at some point, non-Greeks were thinking about how to translate the whole thing, and they thought of the word “Games” as the most “neutral” one.

Anyway, you understand what you mean, or maybe it’s all Greek to you too.

This place is of great importance, and not just for Greeks.

Here, the Olympic Flame is lit, so to declare the beginning of the Olympic Games, that were held in honor of Zeus.

A ceremony takes place where the flame is lit by using the heat and light of the Sun.

This ceremony is the same one that was used thousands of years ago and is modest but quite emotional.

Here (below) is the ceremony location inside the ancient site (front of photo), while at the back are the ruins of the Temple of Hera.

It is proper for the visitor of Ancient Olympia Greece to come prepared, reading the history of this place and its historical importance.

To new generations, it may be unthinkable to comprehend how the conflicts in the -back then- the whole world stopped during the Olympic Games. That alone is huge.

Think of it for a while. Every single war and battle stopped.

The best athletes from different locations from every corner of the Greek world, coming from as far away as Iberia (Spain) in the west and the Black Sea (Turkey) in the east, traveled to Ancient Olympia to compete in a variety of things (and they were more difficult as you see right here).

Five of the above consisted of the Pentathlon (from the Greek word “Pente,” which means “five”).

No mountain bike or windsurfing existed back then. No table tennis or tennis either. You may be surprised, but even Marathon running is also a modern addition.

The museum is not rather big, but there are lots of exhibits.

The Stadium of Ancient Olympia Greece

We had the opportunity to enjoy a bunch of tourists who wanted to run across the stadium as ancient Greeks did. These youngsters put all their effort while running.

Here is the entrance to the stadium.

It was called “Krypti,” meaning “that what is hidden.”

Just imagine all those ancient athletes competing there.

The Area before the Stadium of Olympia Greece

Before the stadium was all the buildings that were supportive of the religious and organizational part of the site.

The remains of the Pheidias Workshop are there too.

This below is part of the Palaestra.

Below is the workshop of Phidias.

This (below) is called “Philippeion.”

It contained the chryselephantine (gold and ivory) statues of Philip’s family, himself, Alexander the Great, Olympias, Amyntas III, and Eurydice I.

The site of Ancient Olympia is located at the Prefecture of Ilia, in Peloponnese, about 3.5 hours driving time from Athens.

Do read here, about another stadium in Peloponnese where additional Olympic Games were taking place.

If you plan your vacations in Peloponnese, then you have to arrange for a visit.

That is the way to understand why the pictures of the Ancient Olympia Greece and the Olympic games echo through the centuries.