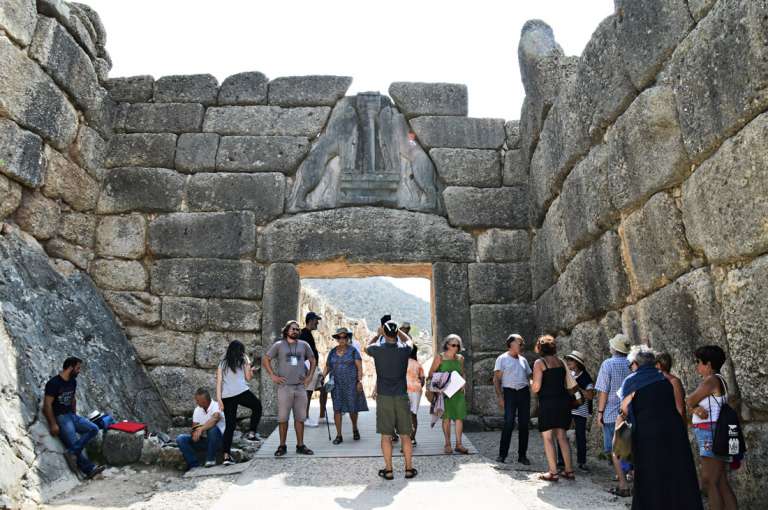 Believe it or not, we haven’t been to this historical marvel of ancient Greece, the ancient Mycenae site, since some high school field trips.

Since we were in Athens, Greece those days we decided to take the kids and have some fun exploring the kingdom of Agamemnon.

This (along with Tiryns) are UNESCO World Heritage monuments.

The term relates to the period from ca. 1600 to 1100 B.C. in Greece. This name comes from the site of ancient Mycenae (Peloponnese), where a grand palace was.

The remains are visible today. It was the kingdom of King Agamemnon, according to Homer. The same Agamemnon who led Greeks into the Trojan war.

It was brought to light by the well-known archaeologist Heinrich Schliemann (around 1870).

During that period, the whole of the Greek mainland went through an era of prosperity. Centers like Mycenae, Tiryns, Thebes, and Athens were related to that.

Lots of luxury items, pottery, and jewelry were produced, based on precious metals and glass. Minoan Crete influenced the art of that ancient Mycenaean period.

Here, the visitor sees the famous shaft graves. These are graves vertically dug into the ground. In ancient Mycenae, the shaft graves cemetery follows a circular shape. Thus the locations are named Grave Circles A and B.

Mycenaeans were popular being a prosperous civilization. They expanded over the Greek mainland and around the Aegean Sea. History records them living an elite style of life in comfort.

That shows in the funerary artifacts after the excavations at the Grave Circles. Most artifacts – visible today – in the museum are of gold, silver, and bronze, decorated with crystals and precious stones.

That didn’t stop them of course from cultivating a rumor of being pirates, looting the coastal towns of Egyptians and Hittites.

Legend says that Mycenae civilization starts with the famous hero Perseus (son of Danae and Zeus). He -allegedly- “employed” Cyclopes to build the walls with all these enormous stones that no human could lift and transfer.

The dynasty of Perseus (Perseid Dynasty) ruled all this area for three generations (at least).

Ιt was one of its descendants – Eurysteus- commissioned Hercules to his twelve labors.

Agamemnon was the son of Atreus and famous -among other things- for leading the expedition against Troy. He got murdered by Clytemnestra (his wife) when he returned.

The site splits into parts with a different entrance yet in 5 minutes walking distance from each other. You can get your ticket and visit both. The museum is in one of them.

The area oversees the whole valley.

In one of the sites, you will see the famous Lion’s Gate and the museum, while in the other the tholos tomb of Agamemnon.

The Treasury of Atreus (or Tomb of Agamemnon) is a large “vaulted” tholos tomb, constructed during the Early Bronze Age around 1200 BC to 1250 BCE.

The floor to ceiling height is 13 meters while the lintel stone above the doorway weighs 120 tons.

The Ancient Cistern Passage at Mycenae

Don’t neglect to get to the top and visit the underground aqueduct of the fort, going deep in the mountain. On a hot day, it is -at least- exciting and refreshing.

This underground cistern is a marvel of engineering and secured the water supply of the citadel.

The photo on the left shows the entrance to the reservoir.

The one at the right is just before reaching the bottom. All this is carved through the hard rock and adds up to the myth of the Cyclops.

The Lion’s Gate is considered one of Greece’s Megalithic Monuments. The “relieving triangle above the lintel (masked by the relief of lions), is the oldest monumental relief in Europe.

There was a double door at the gate — the entrance dates circa 1250 BC.

The Lion Gate was there to guard the entrance to the citadel. The representation of the two lions around a column has a significance that disappears in the depths of history.

The Mycenae citadel is one of the most powerful ones of the late Bronze Age. Historians claim that the symbol is similar to a family crest or what we know as a Coat of Arms.

Further, from being just a symbol, its construction is ideal. The triangular shape of the whole sculpture distributes the weight to both sides.

Here is the Cyclopean wall of Mycenae. You see them all around the area, before entering the archaeological site of ancient Mycenae.

The Cyclopean Walls of Ancient Mycenae

The walls are from enormous limestone boulders, fitted together roughly. Due to their size, ancients thought that Cyclops built them (Cyclopean means made by Cyclops).

These rocks exist almost unprocessed in any manner, and the gaps between them have limestone fillings. They appear in historical texts since the 13th century AD.

The same construction type and Cyclopean walls appear in other nearby cities as Tyrinth and Argos, but they are not the same.

There are four styles of Cyclopean Walls. These are:

The Museum is next to the citadel at Mycenae. A modern and well-organized museum hosts the treasures and artifacts found in the ancient archaeological site, but not all.

The most important ones are at the National Archaeological Museum of Athens.

Explore the exhibition in 4 thematic units. The first two rooms relate to the life of the Mycenaean period people and their burial customs.

The other two rooms relate to the usage and role of Mycenae during history, plus to the activities of Mycenaean period people.

The latter is very important as it reveals the uniqueness of the Mycenaean period Civilization.

A copy of the Golden Mask of Agamemnon (grave mask) is in one of the rooms. It was in the Treasury of Atreus location.

To see the original piece (made of pure gold), pay a visit to the National Archaeological Museum in Athens.

You can combine your tour of the ancient Mycenae archaeological site and museum with a visit to Epidaurus and many more famous places in the nearby area.

For organized tours, you can use this link.